Problem likely to be on Yahoo!'s side.

In recent weeks, we have noticed an uptick in the amount of spam sent from compromised Yahoo! accounts; we have reasons to believe the problems are on Yahoo!'s side, rather than that of its users'.

Spam sent from compromised accounts is notoriously hard to filter: the sender is not only legitimate, they also tend to be a regular correspondent of the recipient. To make matters worse from a filter's point of view, the contents of these particular emails is little more than a link to a URL hosted on a legitimate, but compromised, website.

When opened in a regular browser, the link sends the user to a website spamvertising a health-related product, which is mildly annoying and time-wasting. However, when opened on an Android device, it downloads a variant of the 'NotCompatible' trojan.

We have written about this before, and not much appears to have changed since. There is still little obfuscation used, other than a JavaScript-based redirect on the destination website, and the malware doesn't appear to check the IP address from which the request is made.

We have contacted the registrar where the domains were registered anonymously - but so far have received no response. The domains are still active and are serving malware from either 46.19.139.21 or 46.19.139.22.

But there is something else about these spam emails that is remarkable: they were all sent from legitimate Yahoo! accounts, to addresses in the users' contact list. 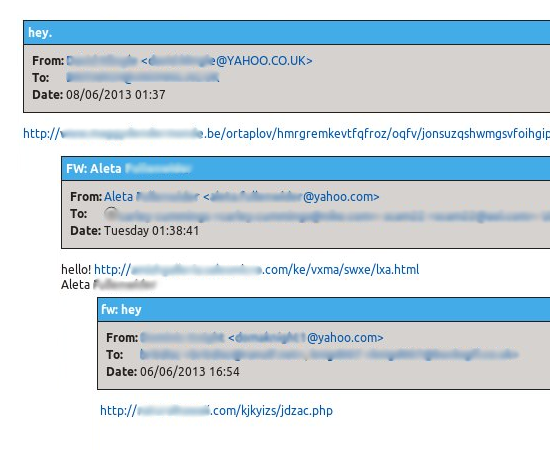 I have worked in the industry for long enough to know that end-users tend to be the most vulnerable component of any system. They use insecure passwords, get infected with keyloggers, or simply don't treat their passwords as confidential - all of which can lead to someone else hijacking the account.

However, we have reasons to believe that, in this case, the problem lies on Yahoo!'s side.

Firstly, the volume of spam from compromised Yahoo! accounts is significantly larger than that sent from other webmail providers. We have noticed this before - and, if anything, the problem has since become worse.

More importantly, from various reliable sources, we know that accounts that had not been used for a very long time have been compromised as part of this campaign. Including, somewhat embarrassingly, an account of my own.

That account was a throw-away account, which hadn't been used for over a year. I don't remember what the password was, but given the throw-away nature of the account, it may not have been very strong. However, other accounts with strong passwords have been compromised too, making it less likely that the compromises happened through cracking insecure passwords.

The email alert that Yahoo! sent me does suggest that the attackers used a valid password to get in. Whether this was the original password is unclear. 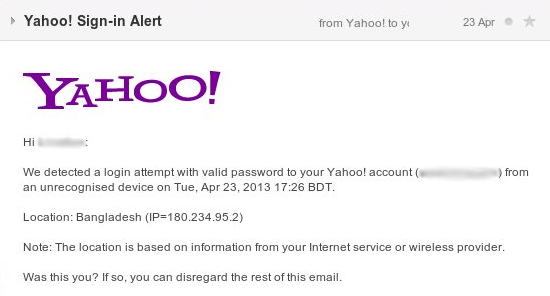 It is unlikely that Yahoo! is unaware of some issues on its side, and the fact that the issue has not yet been resolved suggests that the solution isn't easy to find. It is not even clear whether two-factor authentication will help against these attacks, though it is likely that it will, and setting it up is a good idea.

Yahoo! Mail has come under criticism from the security community recently, both for still not offering HTTPS by default and because of a rather ill-advised plan to make email addresses that had not been used for a year available for registration. But Yahoo! also provides email services for millions of happy customers all over the world. It owes it to them, and to the wider Internet community, to prevent acounts from being taken over.

We will continue to follow the matter closely and are happy to be contacted by Yahoo! to share the samples of spam we have seen.