Tech support scammers won't give up

For security researchers like myself, receiving a call from a tech support scammer is usually a good opportunity for a bit of fun. Indeed, telephone conversations with scammers can be quite hilarious as a recent recording by blogger Troy Hunt shows.

Of course, for those who are tricked into believing there is something seriously wrong with their computer, these scams are no fun at all. Not only do they end up paying a large amount of money for the 'fixing' of a non-existent problem, their trust in genuine security products may be seriously damaged.

The persistence of scammers shows that people do still fall for their scams. I received another call from them this week - something that shouldn't have surprised me as they did the same last year, and the year before that. Indeed, they called me by the same name as I had given them in the past.

Initially, I tried to have a bit of fun and asked if the problems with my Internet connection could have been caused by my fridge, but the caller simply continued to follow his script. This time, his script included a check to see whether I was perhaps running a Mac - something previously reported by MalwareBytes' Jerome Segura.

Some tricks I hadn't seen before were used to attempt to convince me that my PC had a problem. For instance, the files shown after running the command "inf infection" were claimed to be viruses: "Did you download these files, sir? No, that is because these are all viruses." 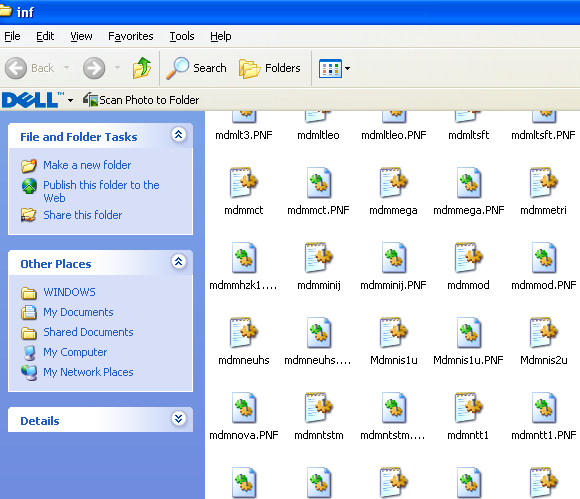 "All viruses". Or are they?

The processes listed as 'stopped' in the Task Manager were also pointed out as indicating that something was seriously wrong.

I was then asked to give the caller access to the machine using AMMYY. Somewhat confusingly, the scammers used this to install LogMeIn123. The latter program now displays a warning about abuse by scammers, but this was cleverly bypassed by the scammers who used the Italian version of the product.

Following some further 'investigations' and a run of the scammers' favourite Advanced Windows Care, I was told it was essential for me to purchase a security product for £119.

I have previously bypassed the payment process by giving the scammers a fake credit card number. This time I told them that I don't own a credit card. After some hesitation, this trick worked: the caller said he would fix my PC if I promised to purchase a pre-paid credit card from the Post Office at the weekend.

In the past, I have been somewhat surprised to see that scammers have been running some real security tools, such as disk defragmentation and free anti-virus products - tools which for some users will actually increase security, even if the 'service' is vastly overpriced. This time they didn't do much more than use the 'repair' function of the aforementioned Advanced Windows Care.

While for me the call was a bit of fun at the expense of the scammers, the security community does take these and other kinds of phone scams seriously.

I was thus pleased to learn that in conjunction with its general meeting next week in San Francisco, M3AAWG is holding a two-day "Voice and Telephony Anti-Abuse Workshop", to help the fight against telephony abuse, including but not limited to tech support scams.

More details on the workshop, including information on how to request an invitation, can be found at M3AAWG's website here.

Posted on 13 February 2014 by Martijn Grooten