VB2014 preview: Apple without a shell - iOS under targeted attack

In the weeks running up to VB2014 (the 24th Virus Bulletin International Conference), we are looking at some of the research that will be presented at the event. Today, we look at the paper 'Apple without a shell - iOS under targeted attack', by FireEye researchers Tao Wei, Min Zheng, Hui Xue and Dawn Song.

Whether you believe its success is because of superior products or merely superior marketing campaigns, Apple has once again made the headlines with the announcement of a new product. The Apple Watch is a wearable device that will be running the latest version of the company's mobile operating system, iOS.

Apple's millions of devoted fans regularly cite the company's security track record. In a recent conference preview we looked at various ways malware can persist on OS X, but the track record of iOS is stronger, with very few known malware cases. True, we recently published a paper on 'AdThief', which infected 75,000 iOS devices, but these were all jailbroken.

However, in their paper, the FireEye researchers look at how Apple's enterprise program provides a surprisingly large attack vector. 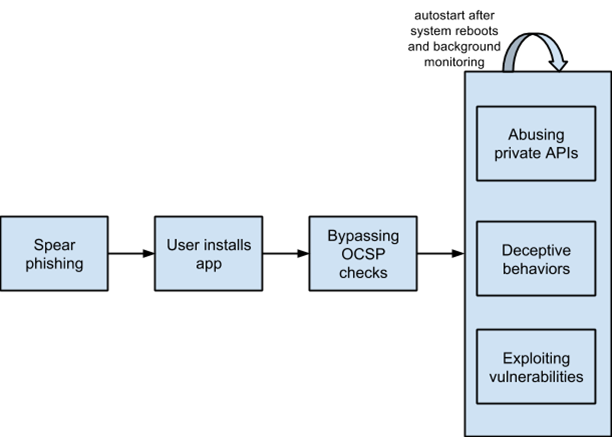 Though not perfect, with more than 100 rules, Apple's review process makes it difficult for malware to make it into the App Store. One of the restrictions is that non-Apple apps are not allowed to make use of 'private APIs'. Apple is known to have banned apps that use these.

However, apps that are distributed through the 'iOS Developer Enterprise Program' - which allows a company to sign and distribute in-house apps - bypass this review process. Many vendors have used the enterprise program to distribute apps to the public.

Using spear phishing to trick a user into installing an enterprise app.

Apple may revoke an enterprise distribution certificate if it suspects abuse; iOS uses a protocol called OCSP to validate enterprise certificates. However, a well-known weakness in OCSP means that inability to contact the OCSP server isn't considered a revocation - something an app can use during installation.

The fact that such apps have bypassed the review process allows them to automatically start after rebooting. Moreover, since private APIs are not intended to be used by app developers, they might not have been written as securely as the public APIs.

The researchers describe a number of vulnerabilities they found in private APIs that allow apps using them to monitor the phone's user, making them ideal for those performing targeted attacks. 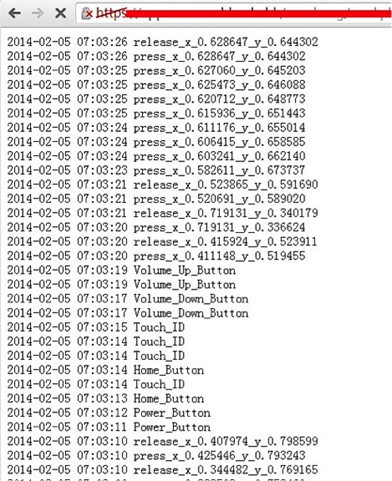 Monitoring a user's activity in the background.

Finally, they point to a conundrum in the iOS security model, where security apps are not allowed to implement system-level protections, whereas malware can use enterprise provisioning to call private APIs.

Unsurprisingly, given the prevalence of mobile devices and the growing concern over their security, the VB2014 programme includes various talks on mobile security, including several on Android and even one presentation on the Tizen platform.

Posted on 12 September 2014 by Martijn Grooten

The Ford Foundation has launched a tool designed to help nonprofit organizations assess their own cybersecurity efforts.

At VB2020 localhost Paul Jung, of Excellium Services, detailed an incident response that he and his team faced when, in December 2019, a Belgian hospital required their help to manage a breach of their informations system.