Second opinion essential in circumstances under which likely victims operate.

Last week, the release of the free 'Detekt' tool was announced. Developed by Claudio Guarnieri and released in partnership with organizations including Amnesty International and the Electronic Frontier Foundation, the tool scans Windows computers for traces of government surveillance spyware.

The tool received a lot of praise from the security community, but there were also those who wondered what it would add to existing anti-virus solutions - and who pointed out that the indicators of compromise on which the tool relies can easily be bypassed by the authors of spyware. I think this criticism demonstrates a misunderstanding of the problem Detekt aims to address. 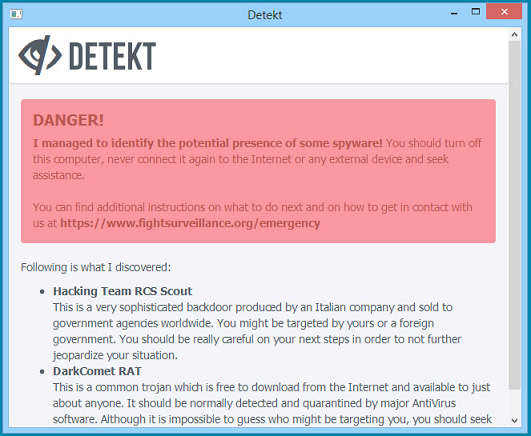 It is true that surveillance malware should be detected by anti-virus solutions, and the fact that it is written by a government should not make a difference: AV vendors have always made it clear that they wouldn't make exceptions. However, whether the malware will be detected in practice is less certain, as the spyware is usually tested to make sure it is undetected by AV products before being sold.

In any case, it is always a bad idea to rely solely on one protection layer - especially if you're worried that a government might be spying on you. It is also known that anti-virus solutions aren't always set up properly, and their licences may be out of date.

Larger NGOs, therefore, have dedicated security teams that make sure their anti-virus protection works as it is supposed to and also check their systems regularly for traces of malware. However, many groups and individual actors that are targets of government surveillance operate on a very small budget and often don't have the skills to perform such checks themselves.

Moreover, the circumstances in which they operate mean that they can't easily trust the outside help they may be able to get locally. This makes the availability of the tool, which is endorsed by trusted organizations, very welcome.

The tool makes use of YARA rules to look for indicators of compromise. Of course, if I can understand the rules (and I am not a YARA expert), then so can the authors of the spyware - and they can (and most likely will) adapt their products accordingly. However, for now the tool may have a 'detection edge' and its modular nature means it can easily be updated. The latest version could thus be an up-to-date tool that can offer a second opinion and additional layer of protection against the latest known spyware threats.

On top of all this, the publicity the tool has received will be a reminder that surveillance through malware is a very real threat for many activists around the world. For that reason alone, I'd say it is worth the effort.

The tool has already proven its usefulness: yesterday, Guarnieri reported that the tool had led to the discovery of a new sample of spyware developed by the infamous HackingTeam company.

Posted on 24 November 2014 by Martijn Grooten