Adobe issues patch for yet another Flash Player zero-day

Adobe has just issued an out-of-band patch for its Flash Player to fix a zero-day vulnerability that is actively being exploited in the wild.

This, however, is yet another vulnerability: CVE-2015-0313, which is being used against Internet Explorer and Firefox users.

This time it is not the Angler exploit kit that is infecting users, but the relatively unknown 'Hanjuan' kit, as Trend Micro reports. A number of researchers, including F-Secure's Timo Hirvonen, believe that Hanjuan's use of the vulnerability may go back as far as December last year.

Last week, we published the VB2014 paper 'Ubiquitous Flash, ubiquitous exploits, ubiquitous mitigation' from Microsoft researchers Chun Feng and Elia Florio. This paper analyses two earlier vulnerabilities in Flash Player's implementation of domain memory opcode and also serves as a good general introduction to the subject. You can read their paper here in HTML-format, or download it here as a PDF.

While updating to Flash Player version 16.0.0.305 should be given the highest priority, users might also want to consider making Flash click-to-play in all their browsers. Unlike NoScript, which does the same to JavaScript, it doesn't seriously impact the browsing experience. Graham Cluley explains how to enable this feature in the five most popular browsers. 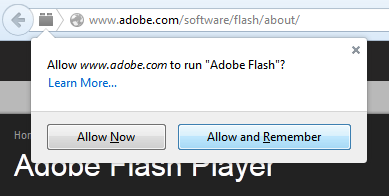 By making Flash Player click-to-play, even Adobe can't run Flash without your permission.

Posted on 05 February 2015 by Martijn Grooten