The award was inaugurated during the VB2014 conference, in honour of late security researcher and malware expert Péter Szőr, who passed away in November 2013. It is given to for the best piece of technical security research published during the preceding year; for the upcoming award this is between 1 July 2016 and 30 June 2017.

Péter Szőr, a 'brilliant mind and a true gentleman'.

A shortlist will be drawn up from the nominations received, from which the Virus Bulletin Advisory Board will select the winner. This award will be presented during VB2017 in Madrid.

There is certainly no shortage of good security papers being published, but the news tombola in which IT security finds itself means that we quickly forget even those that initially stand out. The Péter Szőr Award is an excellent opportunity to highlight and recognise those really brilliant papers, while at the same time remembering the talented researcher who is still missed by many. 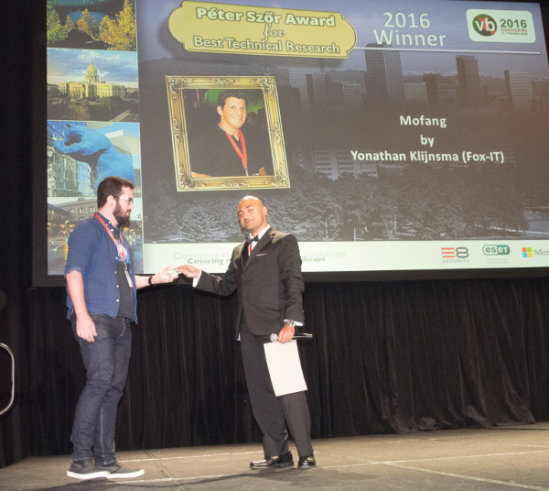 Sanchit Karve, one of the winners of the 2015 award, congratulating 2016 winner Yonathan Klijnsma.

To submit your nominations for this year's award please use this form, or else email [email protected].