The first week of December was packed with security conferences, and VB2017 speakers were busy presenting their research at no fewer than four different events: FIRST in Prague, Black Hat Europe in London, Botconf in Montpellier, and AVAR in Beijing. Security researchers were spoilt for choice, and while other members of the VB team headed to Botconf in France, I journeyed slightly further afield, to Beijing, to attend my first AVAR conference.

Though a global event, the annual conference of the Association of Anti-Virus Asia Researchers is naturally biased towards Asian attendees and speakers, giving the audience some interesting insights into the particular threats facing this most populated part of the world.

A good example of this was a presentation by AhnLab's Minseok 'Jacky' Cha, on targeted attacks faced by South Korean industry. Though some of these attacks have made the global security news – especially those linked to the Lazarus group, which is often linked to the country's northern neighbour – there are far more attacks than often we see reported in the rest of the world, and certainly not all of them come from Korea.

The Lazarus group was the subject of a talk by ESET researcher (and regular VB speaker) Peter Kálnai, who described his and Michal Poslusny's hunt for the toolset of this notorious group, based on the properties of malicious Windows executables, thus giving some new insight into the group's activities. An interesting conclusion was that there are probably multiple cells or subgroups that share the same code, yet that have different building environments.

Another toolkit used in targeted attacks is EHDevel, which was the subject of a talk by Bitdefender researcher Cristina Vatamanu. EHDevel is a specialized framework, with a plugin-based architecture, that uses some novel techniques for C&C communication. It has been linked to the Operation Hangover APT campaign. 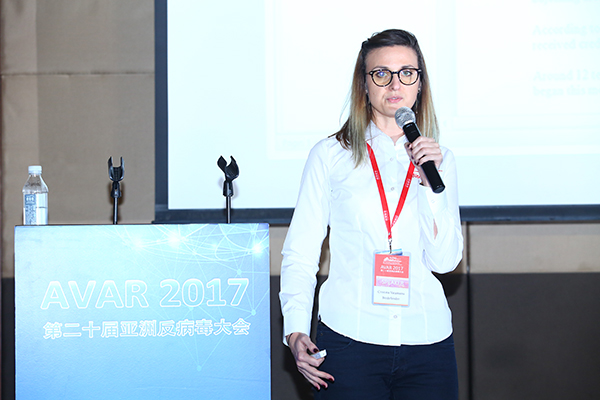 Cristina's colleague, Tiberius Axinte, was one of several speakers who delivered talks similar to those they had delivered at VB2017. Tiberius revisited the topic of the macOS component used by APT28/Fancy Bear. ESET's Robert Lipovsky discussed Industroyer, as he also did in Madrid, and his colleague Filip Kafka once again spoke about FinFisher – though he did add that, shortly after his VB2017 talk, a campaign that had been using FinFisher had switched to using StrongPity-like spyware.

Unsurprisingly, a number of talks dealt with the threat coming from vulnerable smart devices. One such talk was by Ankit Anubhav (NewSky), who said that IoT-attackers will have to start working harder, as all the easy ways to attack them have already been exploited – I am still not sure whether this is a good or a bad thing.

As a means to researching smart devices efficiently, two talks discussed setting up IoT honeypots: one by Tencent researchers Jingyu Yang and Fan Dang, and one by Andrew L. Go and Wren Fer M. Balangcod from G DATA's Manilla-based research lab. The latter pair swapped roles between 'good' and 'bad' guys in their presentations, using a 'hacker hoodie' to indicate which role they were representing.

A talk from Sophos's Rowland Yu, on malware targeting Android-based POS, was also very timely, while his colleagues, William Lee and Jagadeesh Chandraiah (both former VB speakers), also spoke about Android malware: about using recurrent neural networks to detect it, and about malware that makes it onto Google Play, respectively. 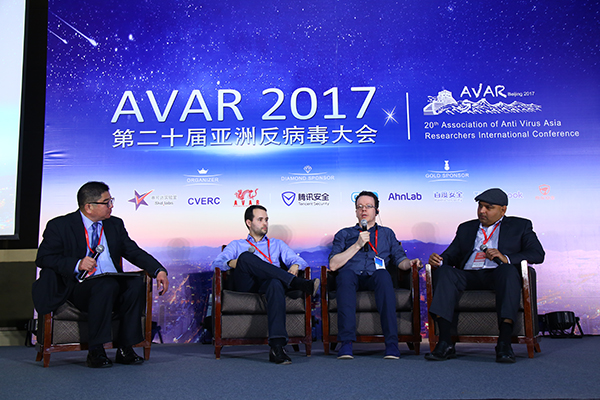 Given that many members of the audience represented anti-virus companies, a talk by VirusTotal's Karl Hiramoto on how his company works with the community was both interesting and relevant. Equally relevant, I hope, was a testers' panel, in which I joined colleagues from AV-Test, NSS Labs and SKDLabs on stage to discuss the state of testing.

Machine learning was also featured on the programme, and a presentation by Kaspersky Lab researcher Alexander Chistyakov was one of the best I have seen on the subject, providing a good introduction into its use in cybersecurity without shying away from the important, but often very technical details. The philosophy that adding 'good' code to malware can't make the file any less bad was an important take-away from this talk.

An equally good introduction, and probably my favourite talk of the conference, was that by Symantec's Dennis Tan, who discussed spam botnets. He provided a very good overview of the subject, using details on specific botnets to highlight certain aspects of the general spam botnet landscape. 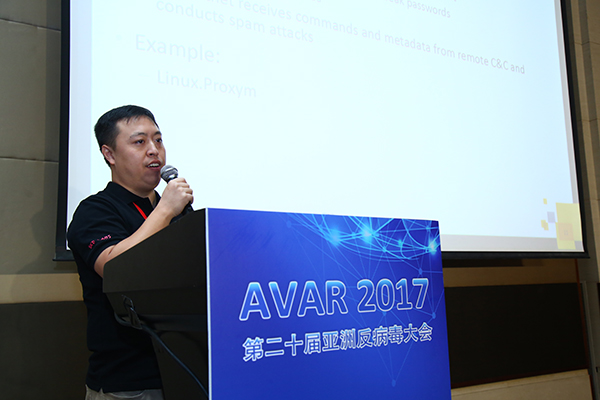 This was the 20th AVAR conference, but only my first. I was pleasantly surprised both by the quality of the talks and by the organization of the event, which this year was in the hands of Beijing-based SKDLabs. The organizers deserve full praise for their hard work, and I have no doubt that next year's event in Goa, India will be just as good.