Spam is mostly noise and that makes measuring it very difficult

A recent blog post published by Recorded Future looked at the possible effect of the GDPR on the volume of spam and concludes there has been no noticeable impact.

The question behind the post is a valid one: more privacy-friendly WHOIS records, inspired by the EU's data protection regulation, could make it easier for spammers to hide their true identities. However, Recorded Future reports that 90 days after the GDPR came into effect, there have been no significant changes in either the volume of spam or that of domain registrations, apart from a likely seasonal small decline in both.

I do not think this is very surprising. While more privacy-friendly WHOIS records may be beneficial to those email senders operating on the border of what is permissible, the vast majority of spam is sent via botnets. These spam messages use either fake or compromised domain names, or use domains registered using fake credentials. For a botnet spammer, the GDPR is as much of a concern as a "do not entry" sign is for a bank robber.

But even if we had seen an uptick in the volume of spam, it would have been premature to attribute it to the GDPR.

Spam is notoriously volatile. Changes on a day-by-day or month-by-month basis can sometimes be attributed to specific events, such as holidays, a botnet takedown, or shifts from or to other malware infection methods. Often though, there is no identifiable reason for what can very big changes in the volume of spam.

On top of that, spam is very hard to measure. Spammers tend to favour volume over delivery rates and thus they are pretty careless who they send their emails to. This means that a campaign can, by chance, do a very good job at avoiding certain kinds of spam traps, while other traps actually see a disproportionately large number of messages from the same campaign.

But perhaps none of this matters very much. The vast majority of spam ends up getting blocked at one of various places in the delivery chain. An increase in volume doesn't always result in more spam emails in people's inboxes. And that, ultimately, is what matters. 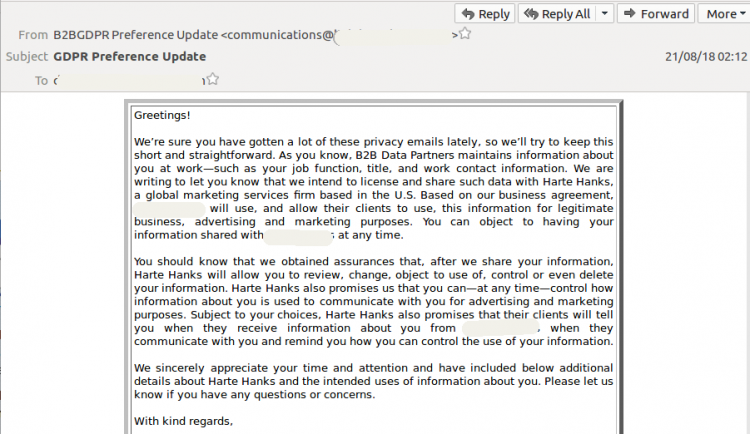