We were very sorry to learn of the passing of researcher Yonathan Klijnsma last week and we offer our deepest condolences to his family and friends. Here, former VB Editor Martijn Grooten shares his memories of Yonathan, a talented researcher and a very kind person.

"Infosec lost a really good one"

It was with much sadness that I learned of Yonathan Klijnsma’s passing last week, just days before his 30th birthday.

Yonathan’s path first crossed mine more than seven years ago, when I was doing some research on a subject he had also worked on. When I later gave a presentation on the same subject, he messaged me to say he had really enjoyed my talk. It meant a lot to receive this compliment from him.

During the next few years, we would occasionally meet at security events. Yonathan was a quiet and somewhat shy researcher, who produced high quality output without feeling the need to be in the spotlight. I was rather pleased that his work on the Mofang APT group won him the 2016 Péter Szőr Award – named after another great researcher who died at a young age.

To lure Yonathan to the Virus Bulletin conference in Denver, where the award was to be presented, I schemed with his manager at Fox-IT and invented a story about law enforcement being interested in his research and wanting to speak with him. Yonathan never guessed the real reason for his trip to Denver, right up until the award ceremony itself. 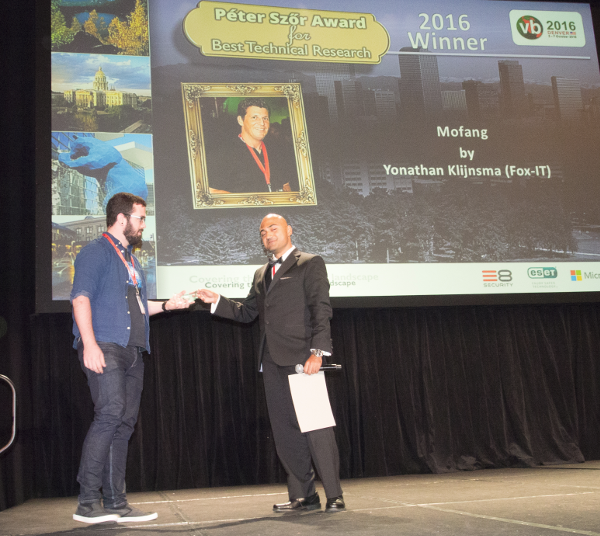 Yonathan left Fox-IT shortly after that for a job at RiskIQ, and in 2018 he moved to Colorado, a place he had fallen in love with during his 2016 trip to Denver. At RiskIQ, he worked on what he is probably best known for today: online credit card skimmers that are collectively known as ‘Magecart’.

It was on the subject of Magecart that he presented a paper at VB2019 in London. I was proud to have him speak at the event and to have his paper included in the conference proceedings. Earlier that same week, he had delivered the keynote address at the prestigious NCSC One conference in his native Netherlands.

Though professionally things were going very well for him, health wise they weren’t: later in October, a tumour was discovered in his tongue. As he was due to receive chemotherapy and radiation treatment, we had a few honest conversations in which he told me about the physical and mental challenges he was facing.

The treatment seemed to have its desired effect and as he was recovering Yonathan was already talking about submitting to BlackHat. But then there was “bad bad news”, as he told me in April: the cancer had returned, was now in his lungs and was deemed incurable.

After he explained a new experimental treatment he was going to receive, we had a beautiful conversation about life and death – a conversation that will stay with me forever.

During this conversation, and during subsequent ones, he would always talk lovingly of his wife Nady: how much of a support she was for him, but also how difficult he thought things were for her. He also never failed to ask me how I was doing.

Yonathan was a very talented security researcher. But more importantly, he was a very kind person. I hope he will be remembered for his kindness in sharing his research and in supporting other people in their work.

My thoughts are with Nady and the rest of his family, his current and former colleagues at RiskIQ and Fox-IT, and his many friends. Infosec lost a really good one this month.