The spam problem is mostly solved.

Most spam doesn't even get sent – it gets blocked by outbound SMTP filters, or 'suffers' from various takedown efforts – and of those spam emails that do get sent, spam filters (or, as they are commonly called these days, email security solutions) block most of them (well over 99 per cent in these tests, but that number is to be taken in the context of the test. In a real-life scenario, with more hard to define 'grey' email, the number is likely to be lower, albeit still well over 95 per cent).

That is great news (something there isn't too much of in the world of information security). But even for the spammers, there isn't necessarily any bad news: given the large volumes of messages sent in their campaigns, even if just one per cent of the emails make it into users' inboxes, that makes their campaign a huge success.

Although further steps may need to be taken for the spam to be converted into financial gain – an attachment opened, ransomware downloaded, a ransom paid – each of which is a further hurdle that sees the success rate drop significantly, there is still enough to make the campaign worth it. Spam remains very profitable.

For the users who open those attachments, and who click through subsequent warnings, spam can be very costly. And for those users, and the IT managers of their companies, there will always be the need for email security solutions.

The VBSpam test is designed to measure the accuracy of such filters, and this month, we put 17 full email security solutions to the test, together with four DNS-based blacklists. All 17 products achieved a VBSpam award for their efforts, with no fewer than nine of them performing well enough to achieve a VBSpam+ award.

Products earn VBSpam certification if the value of the final score is at least 98.

Extra criteria based on the speed of delivery of emails in the ham corpus were not included on this occasion, as (like last time) we could not be 100 per cent confident about the accuracy of the speed measurements. However, we are confident that the awards achieved would have been unchanged had speed data been included. Moreover, we have now resolved these issues and the speed criteria will return in the next report.

In our tests, we measure the accuracy of email security products. We do so by hosting them in our lab and sending emails from servers hosted in the same lab. As we take our role as a vendor-neutral tester seriously, we want to be as open as possible about this – and this is why, in the past, we have always made it clear when we have taken the decision to exclude a few hours' worth of emails from the test, for example because DNS issues led to sub-optimal network conditions.

A few issues plagued this test. First, it started a week later than planned as, having moved into a new lab in May/June, we weren't confident that the new lab was completely ready at the time the test was originally scheduled to start. Secondly, a number of issues with parsing the feeds from our spam providers led to a smaller than usual spam corpus. In particular, very few emails from Abusix made it to the final corpus, and very few emails from either provider were included for the first three days of the test; in these cases, we couldn't be absolutely certain that the emails sent through the products were exactly as they would have been received in the wild.

It should be noted that we have set up our lab in such a way that we can make the decision to exclude emails from the test without knowing what products will be affected. It should also be noted that the small size of the Abusix corpus in this test means that it is less easy to compare products' performance directly with those in previous tests – a fact that should be kept in mind.

Figure 1 shows the catch rate of all full solutions throughout the test, with the first three days excluded for reasons explained above. To avoid the average being skewed by poorly performing products, the highest and lowest catch rates have been excluded for each hour. 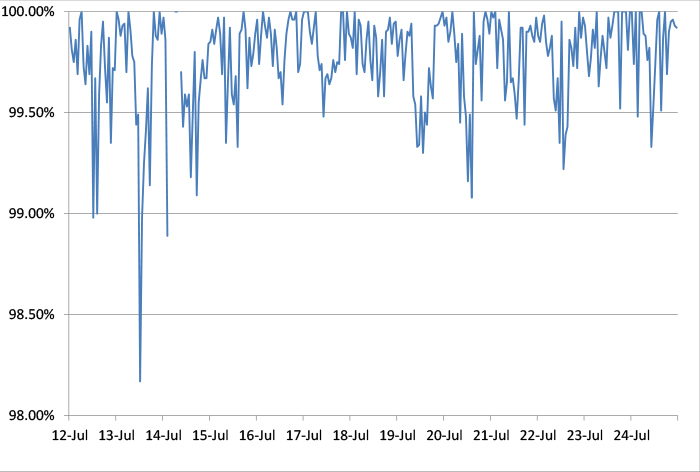 Looking at the spam corpus, we spotted four emails that had been blocked by six or fewer of the 17 full solutions in the test. Two of these contained a religious message, while the other two were almost empty except for a request to contact the sender via email, or phone, respectively. Having observed spam messages for many years, this didn't come as a surprise: both unusual spam (often sent in smaller volumes) and spam that consists of very short emails, are notoriously hard to block.

The trough seen in the graph on 13 July was caused by a number of medical spam emails.

As for the erroneously blocked legitimate emails, no email was blocked by more than two solutions.

The products listed below are 'partial solutions', which means they only have access to part of the emails and/or SMTP transaction, and are intended to be used as part of a full spam solution. As such, their performance should neither be compared with those of the full solutions listed previously, nor necessarily with each other's. 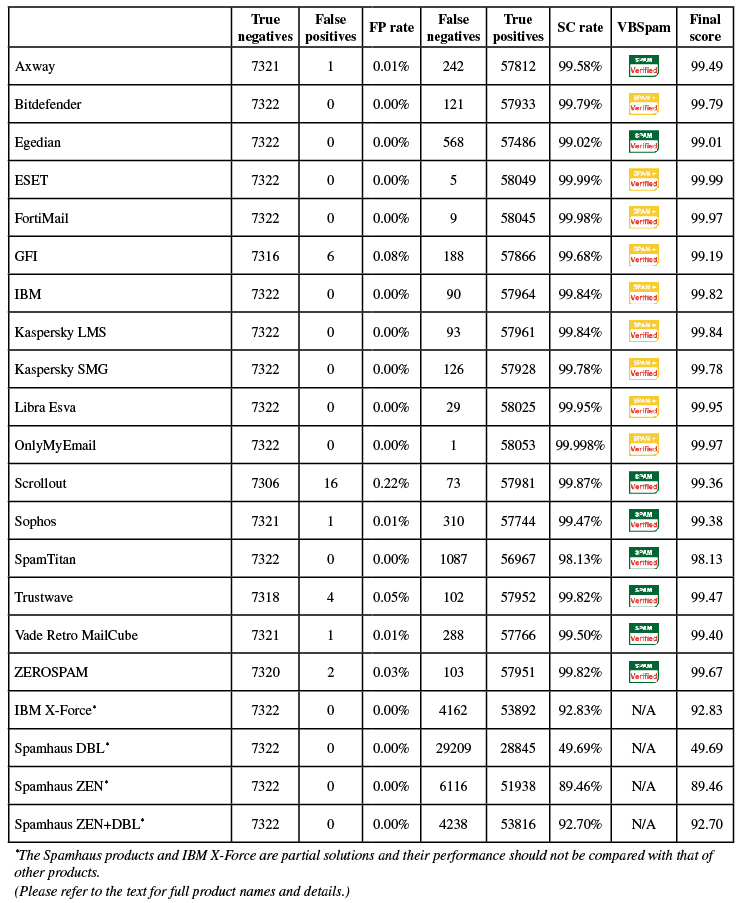 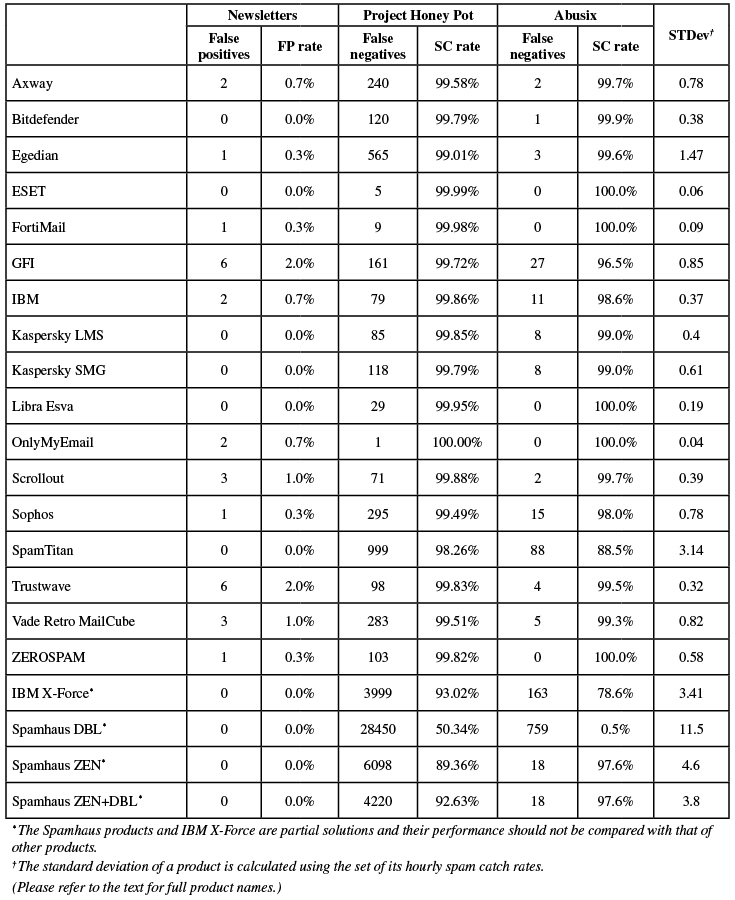 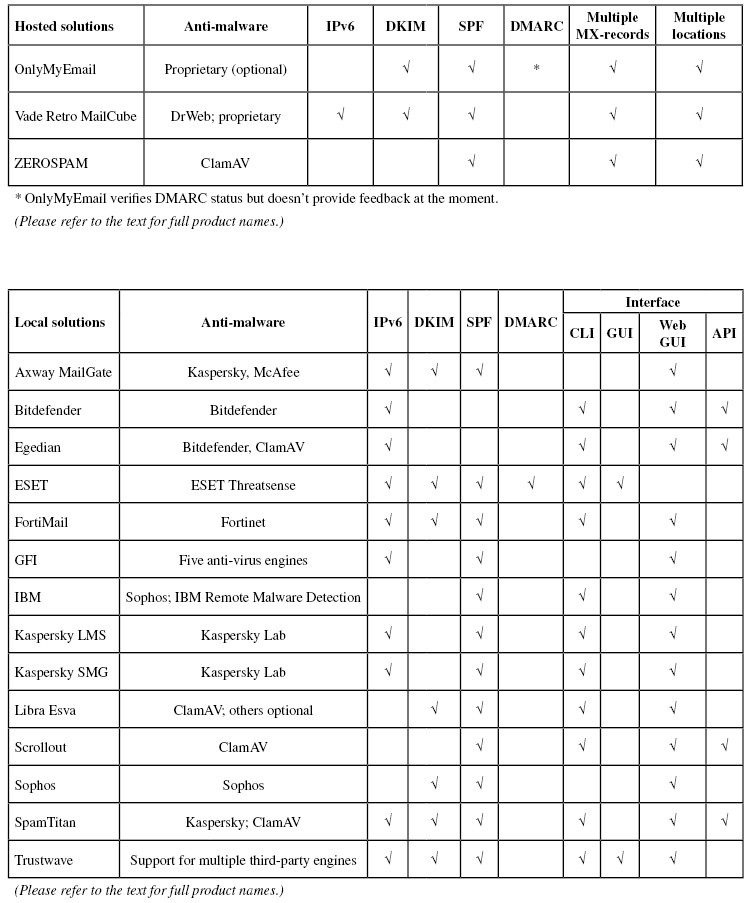 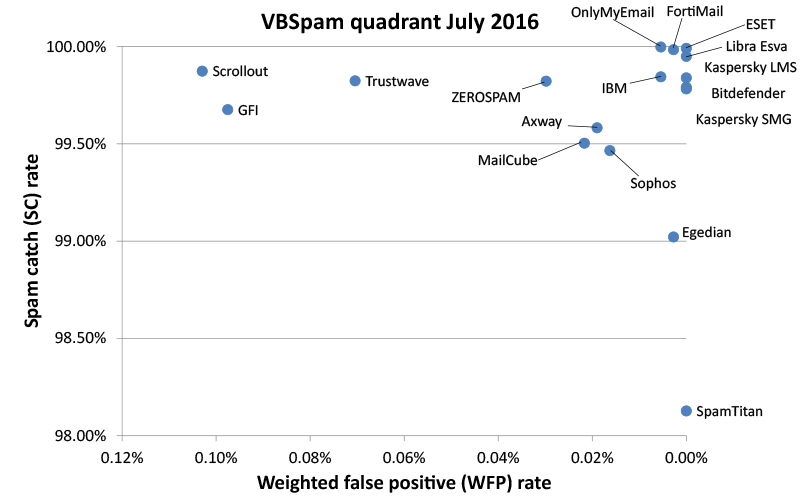 Running the 45th VBSpam test certainly wasn't as easy as most of the other tests have been, but at the time of writing, we have put the issues that plagued this test behind us, and the 46th VBSpam test is already smoothly underway. We are working on some further improvements for the tests beyond that, although the core of the test will remain the same: measuring the accuracy of email security solutions and sharing the results both with the product developers and with the wider security community.