There are many common misconceptions about anti-virus (or anti-malware) software. For example, there is the belief that it protects your computer against all threats and, at the other end of the scale, the belief that, in practice, it rarely protects your machine. Both are wrong, and both can have harmful consequences if you take them to be the truth.

Virus Bulletin's anti-malware tests have always focused on the first-line aspect: how well does a solution protect users against malware that it is asked to scan, or that is copied onto a device under its control? The VB100 award is earned by products that block all files from the WildList (malware reported as having been seen in the wild by security professionals), while generating no false positives when scanning Virus Bulletin's large and regularly updated collection of clean files.

VB100 is a baseline award: the standards it requires are the minimum one should expect of a well-performing product. It is also an award that a good product should achieve regularly – thus it is also important to check a product's VB100 history. A product that achieves a VB100 award all or at least most of the time can be assumed to be a decent anti‑virus product.

In this test, we put 30 solutions from 27 different vendors on our test bench; 21 of them achieved a VB100 award, thus not only showing that there are plenty of good anti-malware solutions on the market, but also justifying vendors' efforts to distinguish their products in other ways.

Changes to the VB100 testing set-up

As the threat landscape continues to change, we have made some changes to our VB100 test set-up.

Tests are still run every two months, but rather than changing the platform on which the test is run each time, we now test every product every time on the two most popular desktop operating systems – currently, these are Windows 7 and Windows 10. A product earns VB100 certification if, on both platforms, it blocks all files from the WildList, and doesn't generate any false positives when scanning the full clean set.

As on-demand scanning for malware has become increasingly rarely used, the test now focuses solely on on‑access scanning of malware. In practice, this means that both malware samples and clean files are copied into a directory on a machine onto which the anti-malware product has been installed, with its latest updates downloaded and, generally, with a connection to the cloud.

Testing on two operating systems rather than one means that we have had to focus on the automation of the tests, as well as on reducing the number of indicators we report; we believe this makes the reports easier to read and to digest, which is important given the large number of available solutions.

This is thus the first of the new-style bi-monthly reports. It is also the first test report written by a new author, which wouldn't be complete without a thank you to my predecessor, John Hawes, for the 64 VB100 reports he put together, during the course of which he tested almost 2,000 products. It will not be easy to fill John's shoes, but thanks to the work of a great team, I expect both the test results and the reports that go with them to be just as interesting. 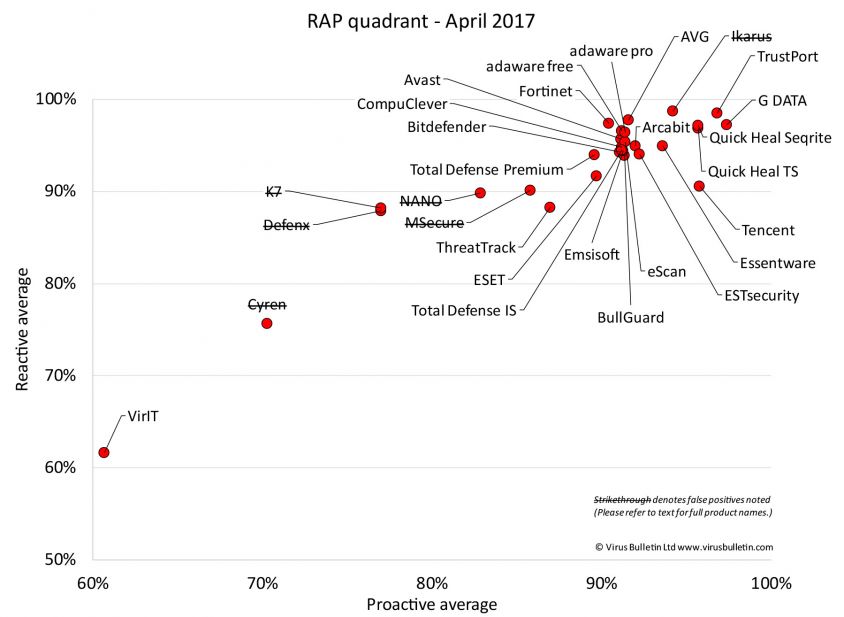 We were pleased to find that all but two participating solutions detected the full WildList – after all, this is the minimum one should expect from an anti-malware product.

Of course, a good detection rate is only relevant if the product doesn't regularly cause disruption by blocking legitimate files. It was thus disappointing to see six products blocking one or more legitimate programs (noting that the clean set had been purged of uncommon programs and those that showed suspicious behaviour).

Overall though, we are excited about this next step in Virus Bulletin's anti-malware testing and we are looking forward to further developing the tests in line with the ever-changing threat landscape.

As mentioned in the introduction, a product passed the test if, and only if, on both platforms it blocked all files from the WildList, and didn't generate any false positives (i.e. incorrect detections) when scanning the full clean set.

The clean set consists of more than 400,000 files, all widely used programs, with any files that show suspicious behaviour being excluded from the set.