For me, one of the most telling anecdotes of this May’s WannaCry outbreak was that of an employee who brought their infected home laptop to work to have it disinfected, but in doing so accidentally infected the company network.

Unsurprisingly, when WannaCry started spreading on that doomed Friday, it was detected by few (heuristic) anti‑virus signatures. However, such signatures are only half of the story: the malware was picked up in many cases by dynamic protection, for example anti-ransomware technology.

Still, the fact that WannaCry continued to spread across internal networks many days after the initial outbreak, sometimes even to machines without a direct connection to the Internet, is a good illustration of why static detection of malware remains an important first line of defence against malware: it has the potential to remove the actual threat rather than having to hope that it will be blocked once activated. It also explains why so many vendors continue to devote plentiful resources to making sure their static detection remains strong.

It is static detection that is put under the spotlight in the VB100 tests, which effectively ask: do anti-virus products manage to fulfil the important task of (statically) detecting malware shortly after it has been discovered? A good anti-virus product should have little problem passing this test most, if not all of the time – as such, we encourage readers to check the full VB100 test history for each product. To get a fuller picture of products’ capabilities we also encourage readers to consult reports by other testers, that may focus on other aspects of blocking malware.

This month’s test saw 33 solutions from 29 different vendors from around the world on our test bench; 29 of the products passed the test and earned VB100 certification.

As in the last test, the products were run on both Windows 7 and Windows 10. Though there was generally little difference in the products’ performance on the two platforms, this did allow us to make sure they ran properly on the two most commonly used desktop operating systems.

We also noticed that various products make different choices when it comes to balancing performance and early detection, and it wasn’t always trivial to trigger the scanning of all of the samples used in the test; however, the lessons learned from the last test meant that this caused fewer headaches than before.

Proactive detection: not perfect, but not powerless either

Though anti-virus is often criticized for its apparent inability to detect new malware, the reality is a bit more complicated. While malware downloaders are indeed constantly changing in an attempt to evade signatures, the actual malicious payload doesn’t change (in a significant way) nearly as often.

For that reason, even static anti-virus engines aren’t entirely powerless against future malware. Our RAP tests are a good demonstration of this.

The first (‘Reactive’) part of the two-part RAP test shows how well products detect malware seen in the wild up to ten days previously. Unsurprisingly, the newer the malware gets, the lower detection becomes, but even the newest malware is detected with a probability of at least 80%. Given that some of the samples used in our test are relatively uncommon, that this is a baseline score, and that in real-world use, this protection would be augmented with dynamic protection, this is pretty good.

For the second (‘Proactive’) part of the RAP test, we freeze the products with their latest updates installed and then disable Internet access. After ten days, we test the products using malware samples seen in the wild one to ten days after the products were frozen, thus after they had last received updates. Even in these rather restricted circumstances, products still blocked 60% of the older samples and 45% of the samples from ten days after the freeze date.

This demonstrates why anti-virus products have long stopped relying solely on their static detection engines, but it also shows why these engines remain an important component of these products. 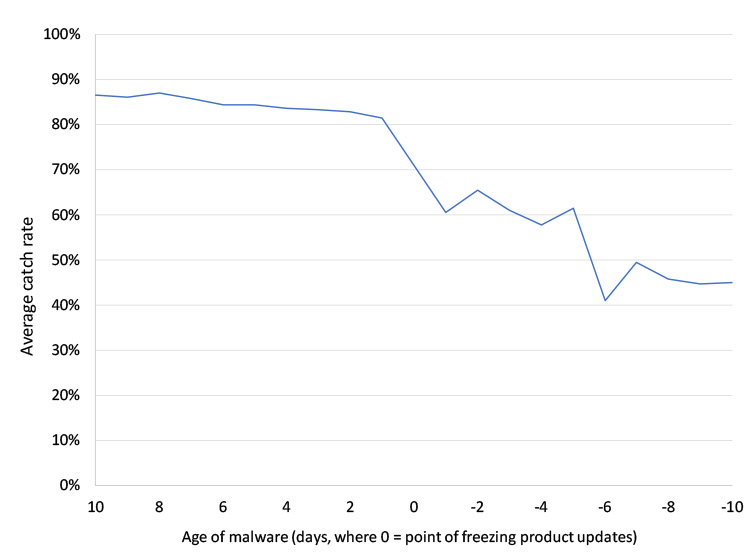 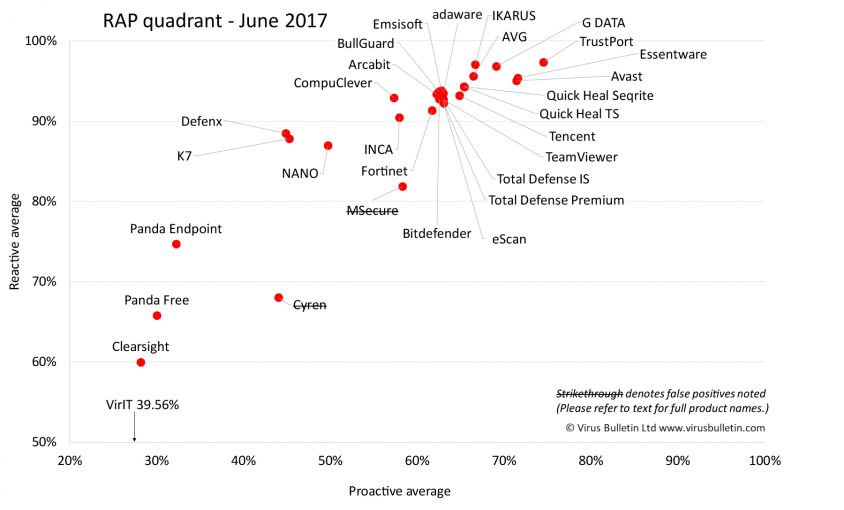 Appendix: The test set up

As mentioned in the introduction, a product passed the test if, and only if, on both platforms it blocked all files from the WildList, and didn't generate any false positives (i.e. incorrect detections) when scanning the full clean set.