Another security testing organization stated recently that it has now seen 640 million different malware samples – a number that continues to grow rapidly.

The number itself isn’t particularly meaningful – indeed, thanks to various kinds of polymorphism among malware, a lot of these 640 million samples are essentially the same – but the important message remains: there is a lot of malware out there. Therefore, if you hear a security vendor claiming that ‘signature-based anti-virus is no longer good enough’, they are right, and in fact this has been the case for at least a decade.

It is for this reason that endpoint security solutions include various kinds of heuristics that help them identify malware that has not previously been seen. And as we have shown repeatedly in the VB100 tests, it does a more than decent job of this: a version of the product that has been disconnected from the Internet for a period of time, and thus hasn’t received any new updates for that period, still detects a decent percentage of new malware – for some products well over 50%.

Such (static) detection rates are impressive, but they are not good enough when it comes to known and confirmed malware. For such malware, the very least one would expect of a good anti-malware solution is that it detects them all, without exception, and does so without blocking a single file from a collection of recent and widely used legitimate software.

For many years, these have been the criteria for earning a VB100 award – one of longest running and most well respected awards for endpoint security solutions, and the one to look for to check that a product satisfies minimum standards. In this month's VB100 test, we put 30 solutions from 27 vendors through their paces; 24 of them earned a VB100 award.

We remind readers that our test only gives a very partial picture of product performance; we recommend readers of this report also read reports from other testing organizations, for instance to find out how products fare when tasked with blocking the execution of malware.

All but three products blocked 100% of the malware in the WildList, a vetted and curated list of malware known to have been seen in the wild. This is the least you should expect from an anti-malware product – i.e. that it blocks known malware still lurking on your systems.

The four files that were missed were all common trojans: Beta Bot, Perkesh, Qadars and Fareit.

On top of the near-perfect performance against the WildList, we found that the solutions recognized more than two thirds of very recent malware files as malicious – with some products performing even better than that. Given that this is just one of many detection layers that exist in anti-malware solutions, this can be considered a good performance.

Interestingly, when it came to the proactive part of the RAP test, malware seen four days after products had been frozen was especially difficult to detect, which suggests that new or significantly modified malware families were launched around that time; malware seen later was easier to detect and thus the second proactive RAP score (against a set of malware discovered 6 to 10 days after product updates were frozen) was higher for most products than the first one (against samples discovered 1 to 5 days after product updates were frozen). 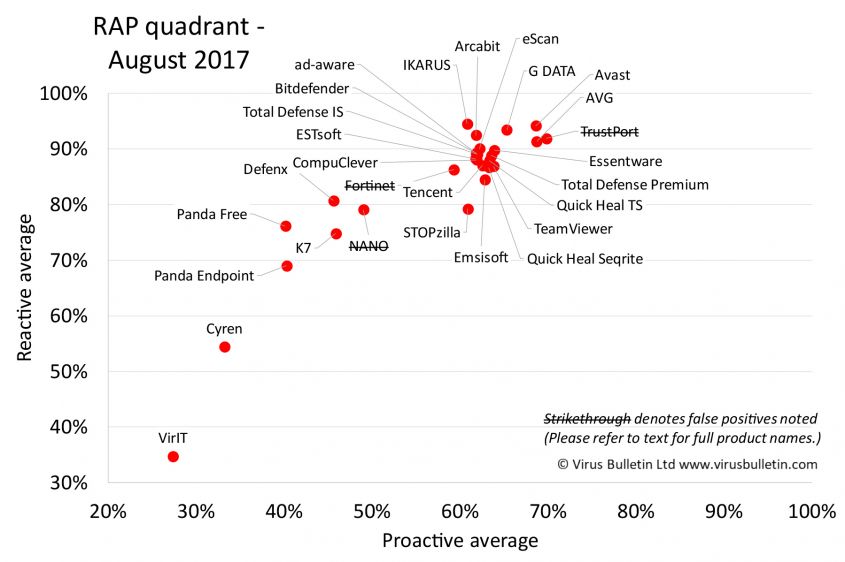 Appendix: The test set up

A product passed the test if, and only if, on both platforms it blocked all files from the WildList, and didn't generate any false positives (i.e. incorrect detections) when scanning the full clean set.