The need for IT security has grown considerably in the past decade. If you are responsible for IT security within your organization, this is no doubt something you have noticed in your daily work – but the plus side of the situation is that there are plenty of security solutions available to help mitigate the issues you and your organization are facing and to make your work easier.

While there exist a handful of well established products and brands, the majority of these solutions are produced by lesser known vendors, and you may, quite rightly, wonder: 'How can I be sure that the solution I am considering buying satisfies at least some minimum expectations?'

Virus Bulletin's certification tests in general, and the VB100 certification for anti-malware/endpoint security solutions in particular, can help provide an answer to this question. For those with purchasing power, we recommend looking for products that pass the VB100 test regularly. At the same time, we also encourage the reading of tests by other testing organizations that focus on other aspects of protection.

With hundreds of thousands of new malicious files being discovered every single day, you will probably not be surprised to learn that many such files are not strictly malicious: they may be broken versions of known malware, or files that simply engage in behaviour similar to that shown by malware. In quite a few cases, the maliciousness of a file depends on the availability of a remote server that delivers a payload and that may have been taken offline at the time of execution.

For a testing organization like Virus Bulletin this matters, as we can only expect security products to detect files that are proven to be malicious. Hence, for many years, we have based part of our certification requirements on full detection of the WildList, a regularly updated and strictly vetted list of malware known to have been seen in the wild.

We are equally strict, albeit in a different way, with our own 'clean set' – a set of clean files used to measure whether a product generates false positives. Here, we require files in the test set to be widely used in the real world and not to engage in any malicious or otherwise deceptive behaviour.

In order to provide some extra detail on the performance of the products in our tests, the VB100 reports have, for almost a decade, included the 'Reactive and Proactive' ('RAP') test – a test which measures how quickly products detect new malware. The RAP scores give a good indication as to how quickly a product catches up when it comes to detecting new malware statically.

In the results that follow, the RAP images display an average of the RAP scores across the two test platforms. 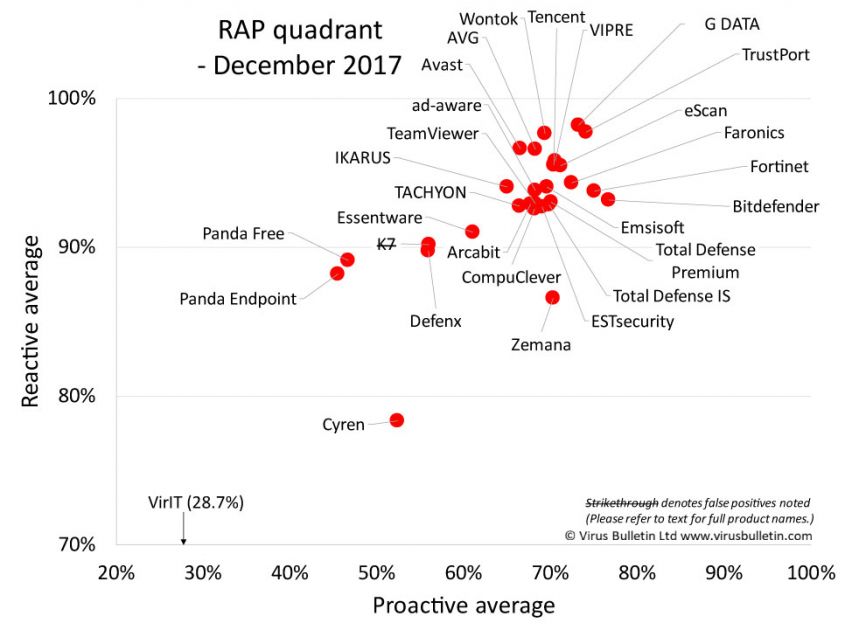 For the ‘RAP’ (reactive and proactive) test, the same set‑up was used, but for the proactive part of the test products were not connected to the Internet. This allowed us to measure their proactive detection abilities by having a ‘frozen’ version of each product scan two sets of malware files: those seen in the wild between one day and five days after the product ‘freeze’ date, and those seen in the wild between six and 10 days after this date.