Pick the odd one out: Fancy Bear; the Equation Group; the Lazarus Group; you.

The answer is you – with very few exceptions, you yourself are the only one you really need to worry about when it comes to online security. It is you who might enable those macros that are 'needed' to view that invoice you just received via email; it is you who might believe there really is a free version of that useful software; it is you who might choose not to update your software with the patches that have long been available.

If you are reading this and thinking that you, personally, do not do any of these things, try reading 'you' in the plural form and take it to include your co-workers and employees as well.

Anti-malware solutions, though certainly not powerless against more advanced attacks, are particularly good at stopping the often non-targeted threats that can reach our systems at least in part due to human error. Almost all malware attacks fall into this category.

In the more than 20 years that Virus Bulletin's anti-malware tests have been running, their primary aim has been to verify that products are able to keep up with the latest, confirmed threats. On this occasion, we were able to do this for no fewer than 29 of the tested products, from 26 different vendors, each of which received a 'VB100' award.

No guarantee, but an important mitigation

At Virus Bulletin, we are critical of bold marketing claims made by vendors about their products' capabilities. In the same spirit, we also warn readers against taking this test report to mean more than it claims to: a VB100 award does not mean that a product is guaranteed to protect you against any possible threat, or even against any piece of malware.

What it does mean is that the product has demonstrated that it is able to keep up with the latest threats, and that it doesn't erroneously block widely used legitimate software.

A lot of malware infections can be avoided by patching software and operating systems and by making users more security aware. Some things will always slip through the net though, and anti-virus plays an important role, at various points in the infection chain, in seriously mitigating these kinds of incidents.

In order to provide some extra detail on the performance of the products in our tests, alongside the certification tests the VB100 reports include the 'Reactive and Proactive' ('RAP') test – a test which measures how quickly products detect new malware. The RAP scores give a good indication as to how quickly a product catches up when it comes to detecting new malware statically. In the results on the following pages, the RAP images display an average of the RAP scores across the two test platforms.

* Numbers based on two completed certification parts; data for one part was discarded due to technical issues.

*Numbers based on two completed certification parts; data for one part was discarded due to technical issues. 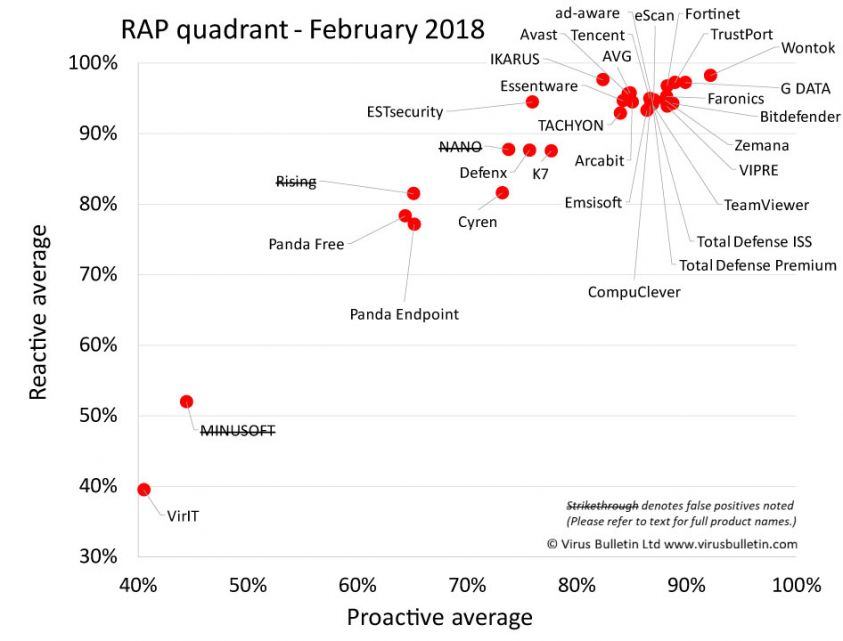