'So, what is the best anti-virus product?'

Naturally, as a company that has engaged in anti-virus testing for over two decades, this is a question we are often asked. And, perhaps surprisingly, we don't feel it is a question we can answer.

Firstly, because what is the 'best' anti-virus (or endpoint security) product depends on the specific requirements of the user or organization. What works best for a home user may not be ideal for a small business, and what will work best for a small business may be less suitable for a large international organization. Not to mention that different threat models require different responses.

Secondly, picking out which is 'the best' has never been what the VB100 tests are about. Their goal has always been to show which products satisfy a minimum standard and, by testing every two months, showing which products perform well over a longer period of time.

To emphasize this part, we will soon morph the VB100 test into a certification test, with this report being the last to be presented as a comparative review.

In this last 'old-style' test, we put 35 anti-virus products from 32 vendors through their paces. 27 of the products achieved VB100 certification.

For three products, it was a missed file from the WildList that stood in the way of achieving a VB100 award. The files included on the WildList are well vetted and have been confirmed to have been seen in the wild more than once, thus detection can (and should) be expected.

Five other products erroneously blocked one or more of the hundreds of thousands of files belonging to legitimate software in our 'clean set'. Though false positives are an inevitable side-effect of any security solution, we believe they shouldn't occur for very widely used legitimate software.

Three products are new to the VB100 test bench.

FireEye is hardly a new name, thanks both to its advanced detection products and its strong research division. After a brief standalone test last year, we are pleased to report that the product easily achieved a VB100 award in its first participation in the test.

The same was the case for TotalAV, a relatively new UK‑based product whose developers are working hard to make a name for themselves in the crowded market for home-user endpoint security.

The third new product in this test was Panzor CloudAntivirus, another new company that presents itself as using 'Artificial Intelligence Cloud technology'. Panzor also saw its first participation rewarded with a VB100 certification.

In order to provide some extra detail on the performance of the products in our tests, alongside the certification tests the VB100 reports include the 'Reactive and Proactive' ('RAP') test – a test which measures how quickly products detect new malware. The RAP scores give a good indication as to how quickly a product catches up when it comes to detecting new malware statically. In the results on the following pages, the RAP images display an average of the RAP scores across the two test platforms. 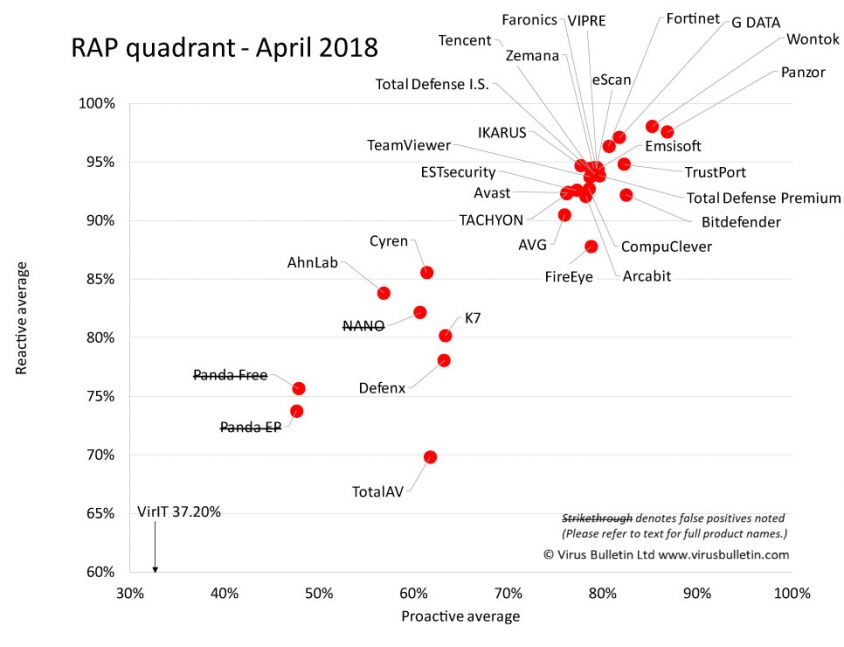