Exploit kits are making a bit of a comeback. Certainly, they aren't as prevalent as they were a few years ago, during the days of Blackhole and later Angler, but there are a number of active kits exploiting vulnerabilities in browsers and browser plug-ins (most notably Adobe's Flash Player) to infect users with various kinds of malware.

In recent months, a second trend has widely been reported where, rather than websites attempting to serve malware, they run JavaScript inside the browser to mine for cryptocurrencies, most often Monero.

Though far less damaging than actual malware attacks, such in-browser mining costs electricity and slows down devices and is thus considered undesirable by many users and organizations.

Most security products thus aim to (and claim to) block such attacks, and we were pleased to find, when running the spring 2018 VBWeb test, that this was indeed the case for almost all cases of cryptocurrency mining – showing that web security products also protect the end-user against this type of threat.

Until now, the VBWeb test reports have looked at products' ability to scan and, if deemed necessary, block unencrypted HTTP traffic. Blocking this kind of traffic at the gateway level is technically easy and hardly controversial.

All the products we tested supported the scanning of HTTPS, and we managed to integrate HTTPS scanning into the various proxies in our test network. This allowed us to include encrypted traffic in our tests and thus cover an even wider range of attacks.

The decision as to whether it is right for an organization to scan HTTPS traffic is not for us to make. The security case is fairly clear, but there is privacy to consider too. We think that, if the employee is informed about the scanning and if they have alternative ways of accessing the internet2, then it is certainly permissible for an organization to install the relevant root certificates on company devices and thus have a security product that scans even the encrypted web traffic.

The main trend in cybercrime over the last few months has been the massive increase in various kinds of cryptocurrency mining on the desktop, on mobile devices and, through JavaScript, in the browser. While there are cases where this is done with the explicit permission of the user (for example as an alternative way for a site or service to generate income), when done without the user's permission it is considered by many to be a malicious activity. 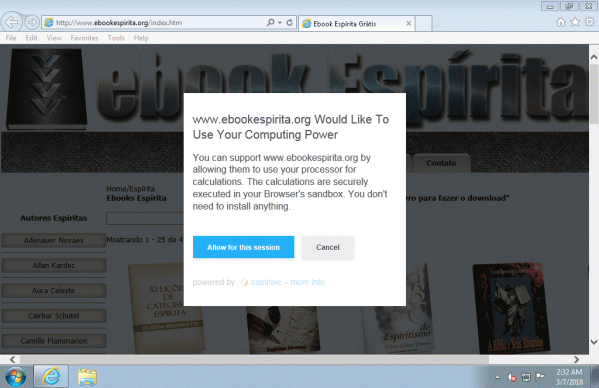 A site asks the user's permission to perform mining.

The case against in-browser cryptocurrency mining is subtle though, especially given that the activity stops when the browser or tab is closed and given that no personal data is stolen. As such, while we found many cases of in-browser mining, we decided not to include them in the 'drive-by download' or 'malware' categories, which we reserve for more harmful activities.

However, we were pleased to note that in all but a few cases, the products participating in both the public and private tests blocked in-browser mining activity.

Rig has been the most active exploit kit for quite some time – in this test we recorded no fewer than four different Rig campaigns, delivering various kinds of malware including Bunitu, Ramnit and Ursnif, as well as various cryptocurrency miners. Unlike in-browser miners, such miners do stay on the system even after a connection has been closed3.

We also saw instances of the Kaixin and Bloodlust campaigns, delivering malware like Quantloader and Gh0st RAT.

As before, the test also included malware downloaded directly, as well as 'potentially malicious' cases where, for one of various reasons, a malicious payload wasn't served, but enough of the delivery took place to reason that a malicious payload was likely to have been served under different circumstances. This also included the download of some malicious Office documents sent as links in spam emails; our system isn't set up to execute the full infection chain, which often requires human interaction.

Once again, Fortinet's FortiGate appliance blocked all of the almost 600 drive-by download cases, showing that even if some browsers within an organization are slightly behind in patching vulnerabilities, FortiGate is there to prevent infections from happening. It also blocked almost all of the direct malware downloads before they made it onto the endpoint – thus taking a significant load off an endpoint anti-virus product.

With a weighted average block rate of 99.8%, we are pleased to award Fortinet its seventh VBWeb award. 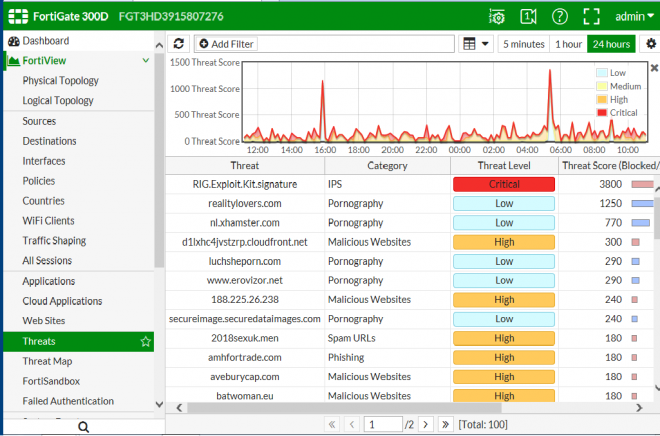 The small comeback made by exploit kits didn't cause any problems for Trustwave's Secure Web Gateway: whether it was one of the various Rig campaigns, Kaixin or Bloodlust, Trustwave blocked them all. The same was true for almost all direct malware downloads, resulting in a 99.9% average block rate.

As such, yet another VBWeb award is well deserved by Trustwave's developers. 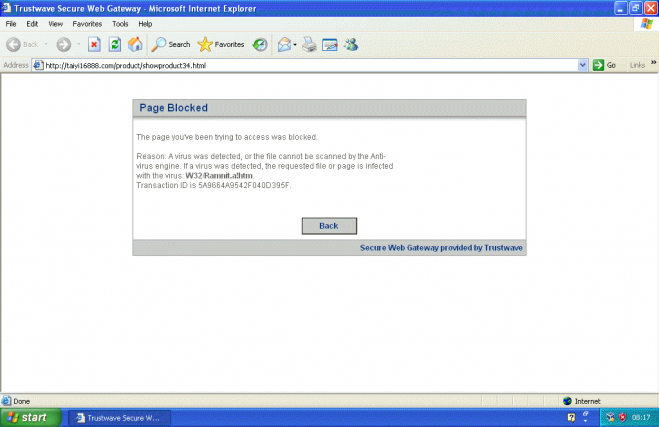 The test ran from 19 February to 7 March 2018, during which period we gathered a large number of URLs (most of which were found through public sources) which we had reason to believe could serve a malicious response. We opened the URLs in one of our test browsers, selected at random.

In this test, we checked products against 571 drive-by downloads (exploit kits) and 423 direct malware downloads. To qualify for a VBWeb award, the weighted average catch rate of these two categories, with weights of 90% and 10% respectively, needed to be at least 70%.

We also checked the products against 335 URLs that we deemed 'potentially malicious'. These were URLs for which we had strong evidence that they would serve a malicious response in some cases, but they didn't when we requested it. There could be a number of reasons for this, from server-side randomness to our test lab being detected by anti-analysis tools.

Each request was made from a randomly selected virtual machine using one of the available browsers. The machines ran either Windows XP Service Pack 3 Home Edition 2002, or Windows 7 Service Pack 1 Ultimate 2009, and all ran slightly out-of-date browsers and browser plug-ins.

1More specifically, the addition of a root certificate.

3This is not the only reason we include them in the drive-by download category though: most drive-by downloads deliver the payload to the machine encrypted (and, in some cases, no file ever exists on the machine). We reason that if an exploit kit is able to run code on a machine, it is 'game over'.