Users easily tricked, but plenty of opportunity for the malware to be blocked.

Researchers at Trend Micro report that the 'Vawtrak' banking trojan now also spreads through Office macros, embedded in documents that are attached to spam emails.

Vawtrak rose to prominence late last year, when it broadened its scope from targeting Japanese banking users (only) to targeting users from banks in many other countries, leading to suggestions that it posed a challenge to Zeus for the title of 'king of botnets'. Last month, we published a thorough analysis of the malware by Fortinet researcher Raul Alvarez.

Last year, cybercriminals rediscovered the use of Office macros to spread malware. Prevalent in the late 1990s, macro viruses disappeared quickly when newer versions of Microsoft Office had macros disabled by default. However, malware authors have recently started to use social engineering to trick users into enabling macros, thus allowing the malicious code to be executed.

Sophos researcher Gabor Szappanos was one of the first to notice the resurgence of macro malware; he wrote an article for Virus Bulletin on the subject in July last year. Since then, the use of macros by malware has continued to increase. 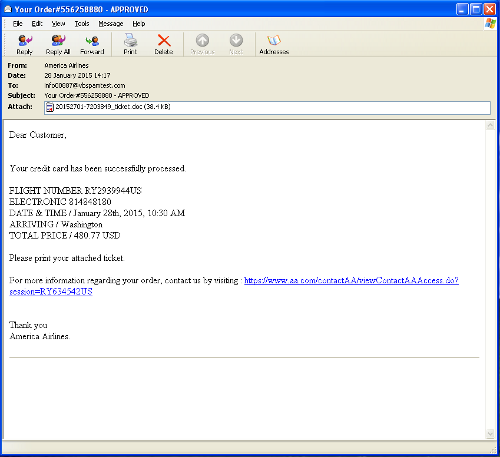 It wasn't difficult to find an example of a spam email carrying such a macro in our VBSpam archive. The email in question has been sent in January and claimed to contain an American Airlines ticket. (Incidentally, the same email and the same attachment were analysed by the Security by Ojscurity blog, which explains in detail how to analyse the malware from the Linux command line.)

The mildly obfuscated VBScript code generates a PowerShell script that downloads the file 'update.exe' from a server that has since been taken down. This executable would then download Vawtrak (though it's worth noting that it could also be used to download other kinds of malware).

It is often said that attackers have an easy time: they only need to find one vulnerability to exploit — be it an unpatched piece of software, a piece of security software failing to do its job properly, or a person being tricked into doing something they shouldn't do. This may be true, but in this example we see that they also have many hurdles to overcome in order for their attack to be successful.

First, the spam needs to bypass spam filters (the email we found was blocked in real time by all solutions that were on the VBSpam test bench at the time). Then the user needs to open the email and open the attachment — which must not trigger anti-virus software. The user must then be convinced to enable macros (an option they may not even have if they work in a corporate environment).

Finally, as Raul Alvarez's paper showed, Vawtrak itself consists of multiple layers. The executable generated by each of these layers could be blocked, or it could be prevented from making changes to the registry and thus maintaining persistence on the machine.

Malware is a serious problem and we're doing okay (at best) at fighting it. But picking on one of many defence layers to show how poorly we're doing, as happens regularly, isn't helpful — and ignores the many opportunities there are to stop malware from executing.

Posted on 24 February 2015 by Martijn Grooten