Chandra Prakash provides details of the kernel-mode operations of a recent (March 2009) version of Rustock, concentrating on the changes from its previous version.

This article provides details of the kernel-mode operations of a recent (March 2009) version of Rustock, concentrating on the changes from its previous version. The previous version referred to in this article (Rustock.C) was detailed in an earlier issue of Virus Bulletin [1]. This article also describes the functions of the Rustock dropper that drops the rootkit driver.

The outer layer 1 of the dropper is packed with the well-known UPX packer. Layer 1 UPX unpacking results in a Win32 command line executable with _wmain as shown in listing 1.

Listing 3 shows the start of the decrypted code after layer 2 unpacking. The decrypted code obtains the location of the process environment block (PEB) using the FS:[30] register. From PEB it retrieves the address of InitializationOrderModuleList in order to find the kernel32.dll load virtual address. This is used to resolve the import addresses of the GetProcAddress, LoadLibrary and ExitProcess APIs. These APIs are in turn used to load more libraries, e.g. advapi32.dll, and resolve functions from them.

Next, beep.sys is used as the first goat driver to install the rootkit driver. The dropper copies the beep.sys driver into a temporary file. The path to the temporary file is obtained using the GetTempPath and GetTempFileName APIs. The dropper uses the SCM APIs OpenSCManager and OpenService to get a handle to the beep service and then calls the ControlService API to stop it, if it is already running. It overwrites the beep.sys driver with its own Rustock driver and starts the beep service later using the ControlService API.

The dropper checks whether the driver has started successfully by opening a named event object created by the Rustock driver. The API used is OpenEvent and the name of the event object is ‘Global\{60F9FCD0-8DD4-6453-E394-771298D2A471}’. The open event is tried several times with one-second sleep intervals until it is successful. After the retries, the original beep.sys driver is restored from the temporary saved location. If the open event fails, the dropper uses the null.sys driver as the next goat driver, repeating the same steps. If using null.sys does not succeed either, then it creates a driver named ‘glaide32.sys’ in %SystemRoot%\System32\drivers and uses it to start the Rustock driver.

After final unpacking in the Rustock driver, when code near the original entry point is reached, ZwOpenSection is used to open the named shared memory section object that was previously created by the dropper. In the driver, the kernel-mode section object is opened with the name ‘\BaseNamedObjects\5B37FB3B-984D-1E57-FF38-AA681BE5C8D9’. After opening the section object, it calls the ZwMapViewOfSection API to get the driver buffer from which to copy. The driver buffer is written to disk with a uniquely generated name that contains all hexadecimal numbers. The driver name generation is described in listing 4.

The driver service name in the registry is generated using the format specifier \registry\machine\system\CurrentControlSet\Services\%x to sprintf API. The driver file path is generated using the format specifier \SystemRoot\System32\drivers\%x.sys. The driver is set up in the registry as a SERVICE_SYSTEM_START service. Note, this is the same driver as beep.sys was overwritten with. The driver is written to disk by direct access to the NTFS driver, bypassing all filter drivers to evade on-access detection [1]. After writing the driver to disk and setting up the driver registry service configuration, the shared memory buffer is deallocated using ZwUnmapViewOfSection. This newly written driver will be started after the next reboot.

The following are the similarities between this version of Rustock and the version presented in [1].

The code snippet used to obtain the device and vendor IDs corresponding to the first DWORD is shown in listing 5.

The logic for obtaining the device and vendor ID corresponding to the second DWORD is identical except for the comparison part, as shown in listing 6.

The Rustock driver creates a TCPIP hook by using the device name \Device\Tcp. First, the device object of the tcpip.sys driver is obtained by using the IoGetDeviceObjectPointer API. Next, the driver object member of the device object structure is used to get the address of the original IRP_MJ_INTERNAL_DEVICE_CONTROL dispatch routine, where the hook is placed. During the creation of this TCPIP hook it allocates two buffers of size 5,220 (0x1464) and 3,200 (0xC80) bytes from a non-paged pool. It also creates an event notification object. The purpose of these buffers and the notification object is to store data from the TCPIP hook function and then notify delivery to bot dll, as described in DispatchFunction3 and DispatchFunction4 below.

In contrast to the previous version of Rustock, which hooked ZwTerminateProcess, this one hooks ZwCreateEvent for communication between the user-mode bot dll and the driver [1].

There are 11 dispatch functions that can be called from ZwCreateEvent hook. These are used for communication between bot dll and the driver and their general details are described below. Any disk I/Os in these dispatch functions are done by direct access to the NTFS driver.

This function is used to overwrite the existing Rustock driver with a new one sent from the bot dll. The new driver buffer and its size are passed in the InputBuffer and InputBufferSize parameters of the RustockBotDllDrvComm structure.

This dispatch function deletes its own driver from the disk.

This function is used for copying to user-mode data that was filtered in the Rustock TCPIP hook in TCP_SEND. When the data is ready, the TCPIP hook calls KeSetEvent and this function waits on that event (see listings 10 and 16).

This function returns to bot dll the process name captured in the TCPIP hook, which sent the data in a certain format through TDI_SEND (see listing 16).

This function is used to connect to a remote host. The InputBuffer contains an array index of the control structure and IP address and port to which to connect. Figure 1 shows a portion of netstat output showing Rustock connected to the SMTP port on several remote hosts. 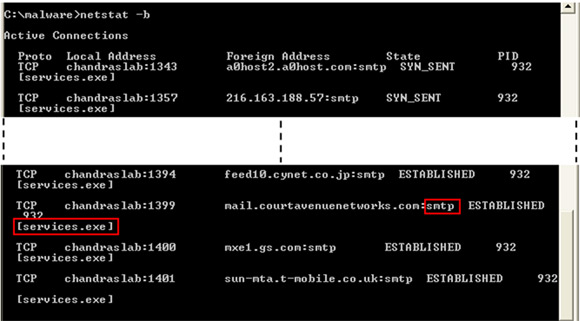 This function is used to send data using TDI_SEND. The index of the control structure and data to send is passed in the InputBuffer.

Figure 2 shows a screenshot of data sent through DispatchFunction8.

This function is used to receive data using TDI_RECEIVE. The index of the control structure is passed in the InputBuffer and the address of the receive buffer is passed in the OutputBuffer.

Figure 3 shows the memory dump of the receive buffer after a series of single-byte receives. Note that every data-sent packet sent or received by Rustock is delimited by CRLF (0xd 0xa) by sequence.

Figure 3. Memory dump of receive buffer after a series of single‑byte receives.

DispatchFunctions 10 and 11 return some state information upon request from bot dll.

The TCPIP hook is mainly on two TDI requests: TDI_SEND and TDI_CONNECT (see listing 16). The hook on TDI_SEND checks for the ‘RCPT TO:’ ASCII string at the beginning of sent data. If a match occurs, the string between angular brackets (left anchor ‘<’ and right anchor ‘>’) is extracted and copied to a memory buffer and then an event is signalled for DispatchFunction3. Also, after finding the matching data this hook obtains the process name of the process sending the data and stores it in a memory buffer for DispatchFunction4. This ‘RCPT TO:’ string field appears to correspond to the recipient’s email address in the SMTP protocol [5].

The part of the hook relating to TDI_CONNECT monitors the number of connection attempts to SMTP port 25 on a per-process basis [5]. The EPROCESS of the process requesting connect is stored in an array of maximum size 400. Every time the process makes an attempt to connect the connect count is incremented using EPROCESS as the key. If the connect count exceeds 200, the connect IRP is completed right away with NT status STATUS_UNSUCCESSFUL (0xC0000001), which returns failure to the user-mode application attempting to connect.