Abhijit Kulkarni and Prakash Jagdale discuss why most real-time anti-virus scanners are ineffective at detecting malware written using the TxF facility and propose a working solution for the problem.

Transactional NTFS (TxF) integrates transactions into the NTFS file system so that the file operations enjoy the ACID properties (Atomicity, Consistency, Isolation and Durability) of transactions. TxF improves application reliability and data consistency and guarantees consistency in the event of system failure. Given the benefits of TxF and its presence in all the latest versions of the Windows operating system (starting from Windows Vista), its usage is only likely to increase in coming years.

This article discusses why most real-time anti-virus scanners are ineffective at detecting malware written using the TxF facility and proposes a working solution for the problem.

TxF is a component of Windows Vista and later operating systems and allows for files and directories to be modified, created, renamed and deleted atomically. TxF is implemented on top of a kernel component called Kernel Transaction Manager (KTM), which provides transactions of objects in the kernel. TxF allows file operations on an NTFS file system volume to be performed in a transaction.

TxF improves error recovery and reliability. It can simplify an application’s error-handling code and improve performance. Consider an example where an application is saving a file. If the application/machine were to crash while writing the file, then only part of the file could be written, possibly resulting in a corrupted file. This would be a very significant problem if a previous version of the file was being overwritten, as data would likely be lost. In a traditional (non-TxF) application a lot of error-handling code would have to be written to handle all the failure cases, thereby increasing the application’s complexity. Let’s look at more scenarios where we can use TxF.

The updating of a file is a common and typically simple operation. However, if the system or application fails while an application is updating information on a disk, the result can be catastrophic, because the user data can be corrupted by a file update operation that is partially completed. Robust applications often perform complex sequences of file copies and file renames to ensure that data is not corrupted if a system fails. TxF makes it simple for an application to protect file update operations from system or application failure. To update a file safely, the application opens it in transacted mode, makes the necessary updates, and then commits the transaction. If the system or application fails during the file update, then TxF automatically restores the file to the state it was in before the file update began, thus avoiding file corruption. TxF is even more important when a single logical operation affects multiple files. For example, if one wants to use a tool to rename one of the HTML or ASP pages on a website, a well-designed tool also fixes all links throughout the site to use the new file name. However, a failure during this operation would leave the website in an inconsistent state, with some of the links still referring to the old file name. By making the file-rename operation and the link-fixing operation a single transaction, TxF ensures that the two actions succeed or fail as a single operation.

How does TxF help?

TxF improves application stability by reducing or eliminating the amount of error-handling code that needs to be written and maintained for a given application. This ultimately reduces application complexity and makes the application easier to test. Say, for instance, you are developing a document management system where an SQL data source needs to be kept consistent with a file store on disk. Ensuring this consistency can be tricky and non-trivial in a non-transactional system. Without transactional file operations, it would be nearly impossible to account for every possible failure scenario, up to and including the operating system crashing at any imaginable point during the process. One of the ways in which this was handled in the past was by storing the new version of the file with a temporary file name, writing the new data to the SQL database, and then renaming the temporary file to the real file name when committing the SQL transaction. But consider what happens if the application crashes or if there is a power outage right after committing to the SQL database but before the file is renamed. Not only would you have an inconsistent data set, but you would also have an artefact on the file system that you would have to clean up at some point. As usual, the extremely difficult part lies in the details of how many different ways the process can fail.

Rather than having to be implemented by each developer, TxF incorporates transaction management capabilities directly into the platform. And since TxF is embedded in the system itself, it is capable of providing a level of integration that would not otherwise be possible for applications.

Using the same example, how can you ensure consistency within a document management application with TxF? This is where the DTC is helpful. To absolutely ensure consistency between your SQL database and your file store, you can start a transaction, perform your SQL statements and file operations within that same transaction, and then commit or rollback the complete transaction based on the outcome. If your SQL call fails, the file will never be written. If your file system call fails, your SQL is rolled back. Everything remains consistent, and all of this is handled automatically by the platform since the operations are enlisted within a transaction. The result of this is less code, which makes the application more robust.

As for platform stability, Microsoft has used TxF in its own technologies, e.g. Windows Update, System Restore, etc., using TxF to write files to the file system within the scope of a transaction in order to handle rollback/commit in case of any exceptions, such as a system reboot due to a loss of power. By adopting TxF internally, Microsoft has helped make its own operating system more stable.

Finally, TxF drives innovation by providing a framework for using transactions outside of SQL calls. Ultimately, TxF can fundamentally change the way developers write applications, allowing them to build more robust code. By incorporating transactions into your design, you can write code without having to account for every single possible failure that can occur. The operating system will take care of those mundane details.

Let’s look at the fundamentals of TxF that will help us to understand the issue explored in the article hereafter.

TxF provides read-committed isolation. This means that file updates are not seen outside the transaction. In addition, if a file is opened more than once while reading files within the transaction, you may see different results with each subsequent opening. Files that were available the first time you accessed them may not later be available (because they have been deleted), or vice versa.

Creating a transacted writer on a file locks the file transactionally. After a file is locked by a transaction, other file system operations external to the locking transaction that try to modify the locked file will fail with either ERROR_SHARING_VIOLATION or ERROR_TRANSACTIONAL_CONFLICT. Table 1 summarizes transactional locking.

The following series of steps represents the most basic use of TxF. More complex scenarios are also supported, at the discretion of the application designer.

The TxF programming model has the following key points to consider when you develop a TxF application:

A real-time anti-virus scanner on Windows typically has a kernel-mode component which is a file system filter driver. If based on the old file system filter model, the filter is called a legacy filter, and if it is based on Microsoft’s new Filter Manager model it is known as a minifilter. Though both the models are supported on Windows Vista, the legacy filter style is not supported on Windows 7. Hence this article will only discuss minifilters.

Minifilter is called at its file close callback for the file c:\target.exe.

Minifilter scans the file c:\target.exe (with the help of a user-mode application).

With this knowledge and the TxF concepts that we have already discussed, let’s see how malware can exploit this. Figure 1 illustrates the problem. 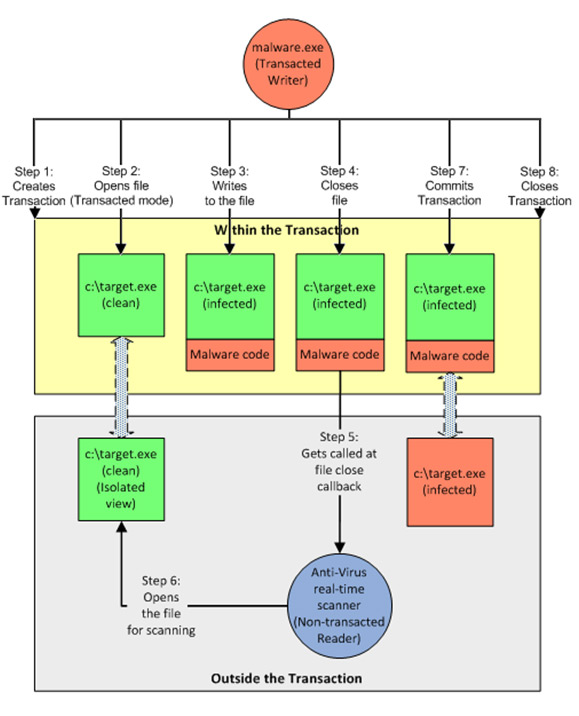 The malware closes the transacted file handle to the file c:\target.exe by calling CloseHandle.

The real-time scanner is called at its file close callback for the file c:\target.exe.

In the TransactionNotificationCallback routine the minifilter driver acknowledges this notification in one of two ways:

So there are a minimum of three code integration points in the minifilter which attract changes: the minifilter’s DriverEntry routine, the Post-Create routine and the TransactionNotificationCallback routine.

We have discussed the basic concepts of TxF and its advantages. We have also outlined a loophole in which malware written using TxF can go undetected by real-time anti-malware scanners, and we have proposed changes that can be made to the kernel-mode component (minifilter) of a real-time scanner so as to close that loophole.