Until recently, malware on mobile devices had not been used for organized crime involving large amounts of money. This changed when the infamous Zeus gang, known for targeting online banking, started to show a clear interest in infecting mobile phones and released a new version of their bot to propagate a trojan for mobile phones. Axelle Apvrille and Kyle Yang present an in-depth analysis of the Zitmo trojan.

Until recently, malware on mobile devices had not been used for organized crime involving large amounts of money. This changed when the infamous Zeus gang, known for targeting online banking, started to show a clear interest in infecting mobile devices and released a new version of their bot to propagate a trojan for mobile phones.

This two-part series (based on a paper presented at ShmooCon 2011) presents an in-depth analysis of the Zitmo trojan. Last month [1] we presented some background information on Zeus and mobile malware and looked at how the attack behind Zitmo works. In this article we will present our reverse engineering of Zitmo and attempt to draw lessons from the attack, as well as suggesting methods for circumventing it.

The Zitmo package consists of a few resource files and an executable named NokiaUpdate.exe. The resource files are typical to Symbian applications – such as the resource in c:\private\101f875a\import, which is used to automatically restart an executable after the phone reboots – and are of little interest for the purpose of reverse engineering. NokiaUpdate.exe is more interesting, however. The .exe file centralizes all malicious functionalities in a single daemon, and this is what we analyse.

The first time NokiaUpdate.exe is run after installation it sends an SMS to +44778148xxxx with the text ‘App installed ok’. Both the text and the phone number are hard coded, hence easily locatable in the malware’s strings. (As for most Symbian OS 9 executables, NokiaUpdate.exe must first be uncompressed before searching for strings.) To ensure that no SMS will be sent the next time the .exe file is run, the file c:\20022B8E\firststart.dat is created and used as a flag. The presence of the file indicates that the trojan has already been launched; if it is absent, an SMS should be sent.

During the first start-up, the trojan also creates an SQL database (c:\20022B8E\Numbers.db) containing three tables: tbl contact, tbl phone number and tbl history, as depicted in Table 1, Table 2 and Table 3. The contact table lists contacts to spy on. Only the first column, the index, is used by Zitmo. The other columns probably refer to the name descriptions of the contacts and their indexes in the phone’s address book (if listed there). The phone number table sets the relationship between contact indexes and their phone numbers. The contact id column corresponds to the index column of the contact table. Finally, the history table stores events related to those contacts such as incoming calls.

Once the initial set-up is complete, the trojan listens for incoming SMS messages. To do so, it uses the technique described in [2], i.e. it opens and binds a socket to the SMS channel. The Symbian APIs provide several ways to open SMS sockets, such as receiving anything (ESmsAddrRecvAny), receiving messages that start with a special prefix (ESmsAddrMatchText), or using a special port (ESmsAddrApplication8BitPort) to receive messages. Since opening an SMS socket to receive all messages is not possible because the phone’s built-in applications are already using this method, the trojan uses ESmsAddrMatchText but with a special trick (see Figure 1): it specifies that the incoming messages to receive must begin with nothing. This method works and actually receives all incoming SMSs. Note this trick has also been explained in [3]. 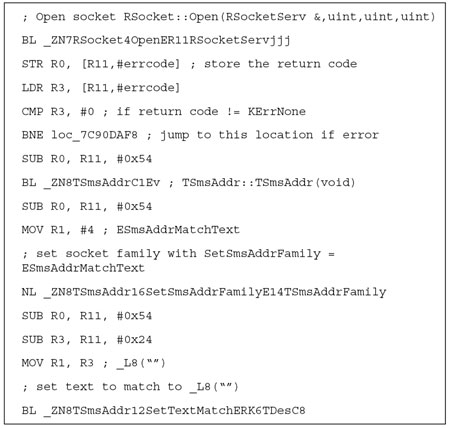 In this article, ARM assembly listings are all taken from Zitmo. They use the following convention: functions beginning with ‘NokiaUpdate’ have been named and reverse engineered by us, functions beginning with ‘ZN’ have automatically been resolved by IDA Pro: they correspond to standard Symbian API calls. Other functions, starting with ‘sub’, are usually not very relevant and have not been reversed. Lines starting with a semicolon are comments.

Each time the mobile phone receives an SMS, the trojan’s socket intercepts it (before it reaches the phone’s inbox). It reads its content in the socket (RSmsSocketReadStream class in the API) and processes it.

An explanation of SMS processing is illustrated in Figure 2. The trojan checks who has sent the incoming SMS. There are three cases: 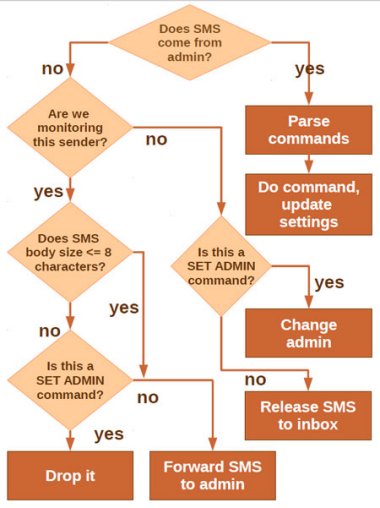 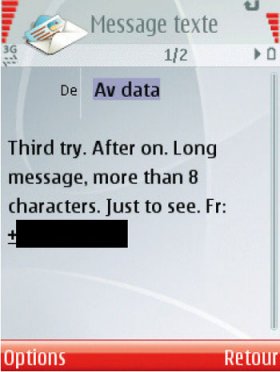 Figure 3. SMS intercepted by Zitmo and forwarded to the administrator (lab test phone).

Zitmo implements 10 different commands: ON, OFF, SET ADMIN, ADD SENDER ALL, ADD SENDER xx, REM SENDER ALL, REM SENDER xx, SET SENDER xx, BLOCK ON, BLOCK OFF. All of these have been described either in [3], [4] or in our previous work [5]. What hasn’t been explained yet is how the trojan recognizes the commands in the SMS and processes them.

Basically, the trojan reads the SMS body, converts it to upper case and counts the number of spaces in order to work out the number of words in it. If there are no spaces, the only likely commands are ON or OFF. If there is one space, the only possible commands are BLOCK ON or BLOCK OFF etc. (see Figure 4). This is rather a strange way to recognize commands, and is perhaps copied from a more sophisticated library. 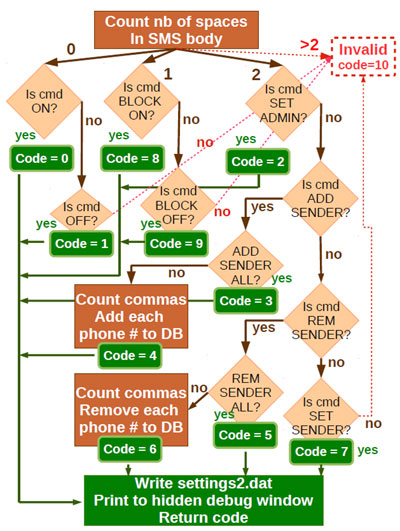 Once the trojan knows which command it is dealing with, it must react. Its immediate action always consists of updating its settings and/or updating the contact and phone number tables (ADD SENDER, REM SENDER and SET SENDER commands). Later, the effective behaviour of the trojan relies only on those two parameters.

The trojan’s settings are dumped in c:\20022B8E\settings2.dat. The format of the file is the following:

For example, the settings of Figure 5 correspond to a disabled trojan (OFF), configured to steal any incoming SMS messages (ADD SENDER ALL) and let incoming calls go through (BLOCK OFF). The administrator’s phone number is +44778148xxxx.

In the end, there are only three different outcomes for an SMS received by the trojan: release the SMS to the victim’s inbox, divert it to the administrator’s phone number or just drop it. This is how the trojan does it:

Zitmo is quite worrying for two main reasons:

First, it is difficult to spot. Even security-aware users could fall into the trap and have their mobile phone infected. The only (weak) signs that something is amiss consist of 1. receiving an alleged certificate packaged as a Symbian package (.sis or .sisx) and not as a standard certificate (.p12 or .pfx), and 2. having an unknown application listed in the phone’s Application Manager. The rest of the social engineering is quite plausible. Moreover, the trojan is signed by Symbian, which gives end-users a false sense of security.

In reality, the fact that the trojan went through the Express Signed program does not mean the application was reviewed. Only some (randomly selected) applications are reviewed, and Zitmo was not one of those. Obviously, a more thorough analysis of the packages undergoing the Express Signed program (e.g. the Symbian security capabilities they require, in-house testing etc.) might block more malware, but this has a financial cost nobody seems to be willing to pay. The Apple Store and the Android Market get the money from applications sales – an interesting concept, although it does not make them technically immune to malware. (The Android Market has been known to distribute several pieces of spyware, which occasionally have been pulled out. The Apple Store has had fewer security issues so far, but it is often seen as so closed that it basically encourages end-users to jailbreak their devices and then download totally uncontrolled software.)

This issue is not simple to remedy with the current mobile framework. The most technically promising solutions we are aware of base malware detection on behaviour analysis [9], [10], on SMS sending profiles [11], or on matching rules combining security capabilities [12]. They should, however, be tested in real-life situations, and perhaps be combined with other approaches such as mobile anti-virus solutions or firewalls.

The second reason Zitmo gives us cause for concern is that it initiates on-demand two-factor authentication. In part one of this series [1], we explained that Zitmo gives cybercriminals the capability to authenticate whenever they want, using two different authentication factors.

Hardware authentication tokens, such as SecurID tokens, are not a solution to this issue. These were defeated by prior versions of Zeus, because the one-time password they generate is entered on a compromised host (the PC). However, in that case, cybercriminals cannot initiate authentication on demand and must wait for the victim to do it.

In the future, mobile phones could act as smartcard readers as long as their SIMs have the capability to store a keypair and the phone features a secure keyboard.

In this two-part series, we have shown how cybercriminals related to the Zeus gang have stolen online banking credentials, even in cases where the bank sends an mTAN to the end-user’s mobile phone.

We have provided an in-depth analysis of the malicious mobile component, Zitmo, which infects Symbian mobile phones. We have explained how the trojan intercepts all incoming SMS messages. Using a disassembler tool with a Symbian remote debugger and configuring a sane phone to act as the attacker, we have stepped through Zitmo’s malicious code and revealed the entire process of SMS interception and handling. This technique even succeeded in helping us display a debug window the malware authors had hidden.

We have also covered how the cybercriminals probably wrote Zitmo. During our research, we noticed a very similar piece of spyware and found that Zitmo was closely related to it, with a high percentage of identical routines and strings. So, the motivation, implementation and inspiration of Zitmo have all been explained. On a technical note, Zitmo’s reverse engineering is fully completed. Future work should probably keep an eye on SpyEye, which is seen as a rising successor to Zeus. Some other aspects would also be worth investigating more closely, such as countermeasures or cybercriminality.

Research into countermeasures would mean testing solutions based on malicious behaviour detection, firewalling or anti-virus capabilities in real-life environments. Research could also be conducted on reviewing challenge-based authentication protocols and proving them formally against Zeus/Zitmo attacks. As for cybercriminality, several points are still unknown (or undisclosed), such as how many online bank accounts were stolen, how much the cybercriminals traded the accounts for, and to whom, and of course, the identity of the gang.

We thank Guillaume Lovet (Fortinet) for his technical and in-depth review, and Ludovic Apvrille (Telecom ParisTech) for useful comments on the article structure. Finally, we thank David Barroso (s21sec) for kindly sharing information regarding Zeus and Zitmo.