By packing their malicious executables, malware authors can be sure that when they are opened in a disassembler they will not show the correct sequence of instructions, thus making malware analysis a more lengthy and difficult process. Abhishek Singh provides a quick reference guide for unpacking malware from some of the most commonly used packers.

Malware authors utilize packers to make it difficult for their malware to be reversed – the packers encode the original instructions. By packing a malicious executable, its author can be sure that when it is opened in a disassembler it will not show the correct sequence of instructions. Packers add some instructions at the top of the binary to unpack the executable. The process of decryption is performed in memory at run time, and the state of the application is restored. Since packers work on a compiled executable, the unpacking module must be independent of the original application.

One of the methods that can be used to locate the original entry point (OEP) of the file is to apply break points on the following APIs:

These APIs are called by the packers’ start-up routines in order to set up the execution environment. When a breakpoint is applied to these routines, we are close to the OEP. When the break point triggers, we can use step-by-step tracing to locate the initialization of the stack frame. The start of the function can be recognized by the initialization of the stack frame.

The instructions shown above denote the start of the stack frame. Once these instructions are located, the debugged process can be dumped to obtain the unpacked version of the file.

In the following sections we describe some common packers and the assembly instructions that can be used to locate the OEP.

The purpose of this section is to provide a quick reference guide that will assist malware analysts in the unpacking of malware and reduce the response time for malware analysis – the full technical details of each packer have therefore been omitted.

ASPack is an advanced Windows 32 executable compressor capable of reducing the file size of 32-bit Windows (95/98/ME/NT/2000/XP/2003/Vista/7) programs by as much as 70%. It is also used by some hackers to protect their programs.

To unpack ASPack, follow the first jmp, and follow JMP EAX. Later in the code you will find the following instructions:

Once these instructions have been identified, as shown in Figure 1, a break point should be put on RETN. When the break point triggers, we are at the OEP. The process can be dumped at this stage, leaving us with the unpacked executable. 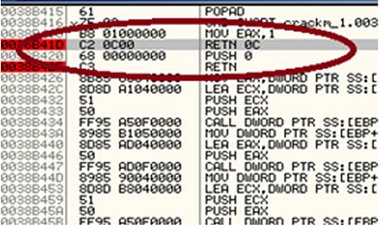 Figure 1. Instructions before the code is unpacked.

Figure 2. OllyScript code used to locate the OEP for ASPack.

KKrunchy [1] is a small executable packer intended for 64k intros. It does not try to pack DLLs and cannot handle exports or TLS. It performs a transform on the input code to allow it to compress better. It will fill uninitialized data sections with zeros and then pack them together with the rest of the code. KKrunchy is often used by malware authors to prevent AV analysts from reversing their code.

PECompact [2] is fully compatible with DEP and code signing, and provides support for Windows 7 and Windows 2008. It provides a good compression ratio compared to other compressors such as ASPack. The PECompact [3] loader consists of three components. The first is the SEH entry, which transfers control to the second component, the loader decoder. The loader decoder decodes the code and invokes the third component, the primary loader. The loader decoder is stored in the last section (or the second-to-last section if relocations have been preserved). The primary loader exists in uncompressed form at runtime in dynamically allocated memory. To hide the transfer of control, an SEH frame is set up and there is an exception. The exception handler then modifies the code at the exception address to a JMP and continues execution.

To unpack PECompact, follow the exception and step through the code until the instructions shown in Figure 4 are observed. JMP EAX is the jump to the OEP.

Set a break point on JMP EAX, step once, and observe the initialization of the stack frame as shown in Figure 5. Dump the process. The dumped process will be the unpacked executable.

Figure 5. Initialization of the stack frame. 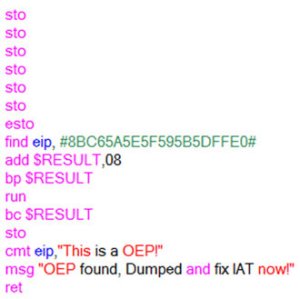 The instruction ‘find eip, #8BC65A5E5F595B5DFFE0#’ locates the instructions ‘MOV EAX ESI, POP EDX, POP ESI, POP EDI, POP ECX, POP EBX, POP EBP, JMP EAX’. Once these are located, the script steps once at the JMP instruction and the debugger is at the OEP. The debugged process now can be dumped to obtain the unpacked version of the file.

NSPack [5] is capable of compressing EXE, DLL, OCX and SCR files. It also has the ability to compress 64-bit executables. It provides support to compress files packed by other packers such as UPX, ASPack and PECompact. It supports direct compression of directories or multiple files. This packer is quite commonly used by malware authors.

As shown in Figure 7, the packer starts with the instructions PUSHFD, PUSHAD.

Figure 7. The starting instructions for NSPack. 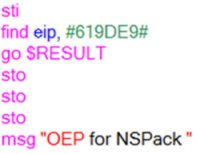 FSG stands for Fast Small and Good, and is currently used to pack various malware. It was originally created to pack assembly demos. Since it has a small loader, it is one of the most desirable packers for small executables.

In order to obtain the unpacked executable file for FSG 1.33, put a break point on the LoadLibraryA function, as shown in Figure 10.

When JE Address triggers, we can observe the initialization of the stack frame. We are at the OEP, so dump the process to get the unpacked version of the file.

For version 2.0 of the FSG packer, the instructions that indicate the end of the FSG stub are as follows:

In order to manually unpack a file packed with FSG 2.0, put a break point on LoadLibraryA and execute the compressed file. When it breaks, clear the break point and execute until return (Ctrl -f9). Step through the debugged application until the instructions shown in Figure 12 are reached.

Here, ‘JMP DWORD PTR DS: PTR [ebx+0Ch]’ is the jump to OEP. Once the JMP instruction is executed, dump the process to get the unpacked version of the file. 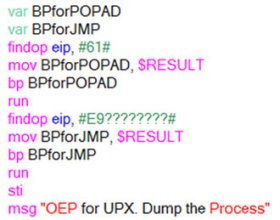 PEDiminisher is a simple PE packer. It uses the aplib compression/decompression library. Many AV engines have the ability to unpack files packed with PEDiminisher to check for malicious content.

The end routine for PEDiminisher is shown below:

For unpacking, the end instructions must first be located in the packed file (as shown in Figure 15). JMP EAX is the jump to the OEP. Set a break point at the JMP instruction, step once and then dump the process to get the unpacked version of the file. 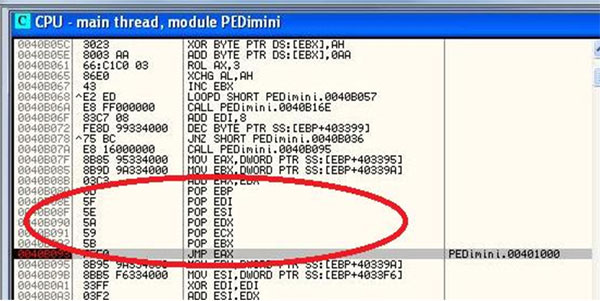 Figure 15. The end instruction for PEDiminisher. 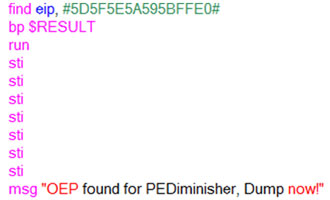 The instruction ‘find eip, #5D5F5E5A95BFFE0#’ locates the instructions ‘POP EBP, POP EDI, POP ESI, POP EDX, POP ECX, POP EBX, JMP EAX’. The script then steps through the debugger until it reaches JMP EAX. Once it is at JMP EAX, the code steps once and is at the OEP. The OllyDump plug-in can be used to dump the process and we are left with the unpacked version of the executable file.

Figure 17. The last instructions for the MEW packer.

The logic used to locate the OEP for MEW is shown in Figure 18. The code ‘findop eip, #C3#’ locates the RETN instruction in the debugged process packed with the MEW packer. Once the RETN instruction is located, the debugger steps once and is at the OEP. The OllyDump plug-in can be used to dump the process and we are left with the unpacked version of the executable file.

Reducing the time it takes to perform malware analysis is very important. For static analysis of malware it is important that the malware is unpacked. There are many approaches to unpacking a piece of malware – for example, it can be executed in a virtual environment and then we can capture a memory snapshot of the executing malware. Once we get the snapshot, we can dump the unpacked malware directly from memory. However, it is possible that not all of the code of the unpacked malware will be in memory, so dumping a process from memory might not be an effective unpacking method. Loading a packed malicious executable and executing step by step instructions in a debugger is one of the best ways to locate the OEP and execute the malware. In this article we have provided assembly instructions for the most commonly used packers which can be used to quickly unpack malware. We have also provided OllyScripts for the logic to manually unpack the malware. This can further aid in reducing response time for malware analysis.