Obfuscation in Android malware, and how to fight back

Malware authors are certainly creative when it comes to hiding their payloads from analysts’ eyes, using methods such as emulator detection, application icon hiding, reflection etc. This paper focuses on obfuscation techniques encountered while analysing Android malware. We present five off-the-shelf products (ProGuard, DexGuard, APK Protect, HoseDex2Jar and Bangcle) and make suggestions as to how researchers can detect when they have been used in malware, and some techniques to help with their reversing. We also list some custom obfuscation techniques we have encountered in malware: loading native libraries, hiding exploits in package assets, truncating URLs, using encryption etc. We provide examples and supply the sha256 hash in each case. Finally, we reveal a few new obfuscation techniques of which we are aware, which might be used by malware authors in the future. There are techniques for injecting malicious bytecode, manipulating the DEX file format to hide methods, and customizing the output of encryption to hide an APK. We provide the current state of play as regards ongoing research to detect and mitigate against these mechanisms.

While obfuscation is not reprehensible, it has always been particularly popular with malware authors. Numerous Windows malware families use packers, obfuscation and anti-debugging techniques to hide their devious intentions from end-users and security researchers alike.

‘The use of ProGuard or a similar program to obfuscate your code is strongly recommended for all applications that use Google Play Licensing.’ [1]

In this paper, our aim is to assist security researchers and anti-virus analysts in their reverse engineering of Android malware. We provide tips to detect specific obfuscators, as well as techniques for reversing them and accessing the real payload.

ProGuard is the most well known of all the Android obfuscators, as it is integrated into the Android build framework itself. It is also often encountered in malware (in a partial database of 460,493 samples, we spotted it in 15% of samples). However, other tools, such as DexGuard – the extended commercial version of ProGuard – and APK Protect also exist.

By default, ProGuard renames paths, class names, methods and variables using the alphabet. Thus, spotting strings such as ‘a/a/a;->a’ in the smali code is a strong indication that the sample has been obfuscated using ProGuard. Of course, this simplistic method of detection is not infallible because ProGuard can be configured to use any replacement dictionary you wish using the options -obfuscationdictionary, -classobfuscationdictionary and -packageobfuscationdictionary. For instance, Android/GinMaster.L uses a custom dictionary, where the strings were probably generated randomly using something like http://www.random.org/strings.

The replacement of path names, class names, methods and variables cannot be undone. However, usually the reversing of ProGuard-ed samples isn’t too difficult because the strings and code layout are not modified. The work is very similar to reversing an application coded by a beginner (poor choice of variable names etc.).

Working on DexGuard-ed samples is much more difficult. [2] lists the obfuscator’s features. The main reason why DexGuard-obfuscated samples are more difficult to work with is because the class and method names are replaced with non-ASCII characters and strings are encrypted. Tools such as JD-GUI [3] and Androguard [4] are more difficult to use (e.g. difficult to get name completion). It is as if reverse engineers have had their senses dulled: text strings and even some familiar function calls and patterns no longer exist to guide the analyst to the more interesting parts of the code.

Fortunately, no obfuscator is perfect. [5] clarifies parts of how DexGuard works. Meanwhile, we provide a code snippet that can be used to detect it, and three different ways to help with the reversing of DexGuard-ed samples.

First, its detection – i.e. identifying the use of DexGuard on a sample – is usually fairly visual: the repetitive use of non ASCII characters gives it away. The code snippet below lists non-ASCII smali files in smali disassembled code.

Second, its reversing can be made easier by using the following tools or techniques:

APK Protect [11] is another advanced off-the-shelf obfuscation product. The first time we spotted it being used in Android malware was in Android/SmsSend.ND!tr in March 2014. It is easy to identify its use in malware, because the string ‘APKProtected’ is present in the DEX. Like DexGuard, its reversing is difficult. In particular, we worked out its string encryption process, which is illustrated in Figure 1. 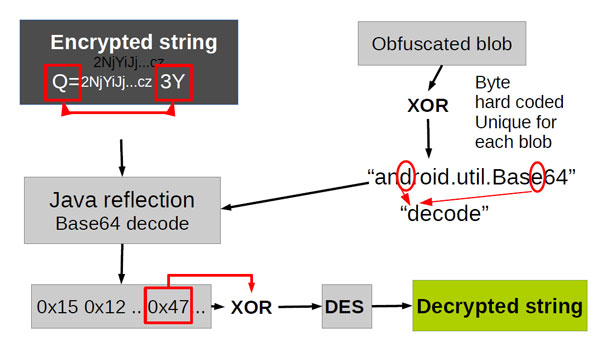 To decrypt an encrypted string, one must:

Knowing this, it is possible to implement one’s own string decryptor. The implementation must be adapted to each sample as XOR keys change.

An alternative to this labour-intensive method (which has to be repeated for every single sample) is to send the sample for analysis by Andrubis [12]. As shown in Figure 2, Andrubis does the work for us, showing the URLs the malware contacts and the decryption key.

HoseDex2Jar is a packer that was released a year ago. It is quite simple, and thus easy to circumvent. It is based on the premise that, normally, DEX headers are exactly 0x70 bytes long. However, it was found that Android does not strictly enforce the header size, so one can add data at the end of the header.

This is precisely what HoseDex2Jar does:

This is easy to spot: look for DEX files with header size greater than 0x70 (= 112). This can be done using Hidex, which displays a warning:

To reverse hosed applications, Tim Strazzere released a de-hoser [13]. We have not encountered any hosed malware yet.

Bangcle [14] is an online service for packing Android executables. The process is the following:

The packing process modifies the structure of the original APK quite extensively:

The difficulty lies in reversing samples that are protected with Bangcle. Though this has yet to be confirmed, [15] claims that ‘a growing percentage of malware, such as bank Zeus, SMS Sender, and re-packaged applications, are packed by [the Bangcle] service’. We spotted Bangcle in Android/Feejar.B.

Bangcle is particularly resistant to reverse engineering because:

The solution we used in order to gain a better understanding of packed malware consists of using IDA Pro’s ARM remote debugger. The remote debugger server is on the Android platform, while it communicates with IDA Pro on a remote host. We attach to the thread of a process that loads libsecmain and dump the memory when it is decrypted (see Figure 3).

(Click here to view a larger version of Figure 3.)

Malware authors have been very active in designing their own obfuscation techniques. Some of the techniques are basic, and others are more complicated:

4. Obfuscation in the future

As we have seen in the previous sections, malware authors are interested in obfuscating their code, and if Android’s crime scene continues to follow the evolution of Windows malware (as it has done until now), then we are only at the beginning of the story. In particular, packers are likely to normalize as UPX (and others) did for Windows. In this section, we prepare for techniques malware authors might use in the near future.

In [24], Bremer demonstrates that it is possible to inject bytecode into nearly any class, with only minor modification. The class needs to have at least a virtual function, and the injection code must read the bytecode to inject as a string and replace the address of that virtual method with the address of the string. An attacker could use this technique for evil:

Fortunately, for now, Bremer’s technique is limited to returning integers (see Figure 5). However, there is no doubt that it can (and perhaps will) be extended in the future. Anti-virus analysts may try to detect the bytecode loading code, which is based on the iput-quick and invoke-virtual opcodes, however a generic signature will be difficult to design as there are several possible variations and potential false positives. 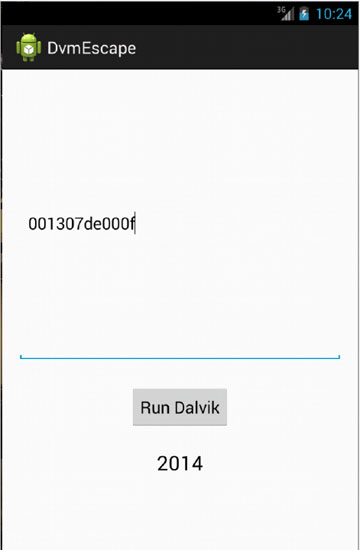 In [9], we demonstrated that it is possible to hide methods from disassemblers. This is potentially interesting to attackers if they locate their malicious code in those hidden parts. Fortunately, the technique was published along with the Hidex detection tool [8]. (For more information, please see slides from Insomni’hack 2014 [9].)

Ange Albertini has released a Python script [25], [26] that is able to manipulate the encrypted output of AES or DES so that it looks like a customizable PNG, JPG or sound file. A malware author might be interested in using this technique to hide an APK in assets or resources. He/she would create an application which looks fairly genuine, with a seemingly innocent PNG as an asset. The code would load the asset and decrypt it with a hard-coded key to reveal the real, evil APK. The malicious APK would then be installed on the device. The attack is feasible, and such an APK can be created using AngeCryption. However, a few hacks are necessary: the End Of Central Directory (EOCD), which marks the end of the ZIP file, must be duplicated and padded to 16 bytes (for encryption with AES). We are currently working on a proof of concept and detection tool.

We have seen Android malware authors use plenty of different techniques to obfuscate their code. With new tools like Bangcle, APK Protect and DexGuard, we fear that mobile malware will become increasingly difficult to reverse in the near future – not to mention techniques such as bytecode injection, method hiding or AngeCryption which haven’t been seen on the malware scene, yet.

In this paper, we have shown that we are not totally helpless in the face of obfuscation. A few simple, but well chosen Unix find/grep commands are useful for understanding what is happening. And in most cases, we have managed to reverse samples with known existing tools such as baksmali, apktool and Androguard – these tools usually work adequately (or nearly), it is more a matter of looking at the right location. Moreover, encryption, which sounds frightening at first, does not turn out to be so difficult to reverse in practice: we just have to write a few lines of code to decrypt the ciphertext. For situations in which reversing remains difficult, we have provided a few enhancements to Hidex, a Perl script which assists reverse engineers in detecting some situations, and helps with the renaming of non-ASCII strings used by some obfuscators.

So we are not helpless, but if we want to keep pace with the techniques malware authors are likely to use in the near future, we had better focus on tools and research in this area as soon as possible.

[25] Albertini, A. When AES(*)=*, April 2014. https://corkami.googlecode.com/svn/trunk/src/angecryption/slides/AngeCryption.pdf.