From distributing malware to hosting command and control (C&C) servers and traffic distribution, malicious domains are essential to the success of nearly all popular attack vectors. To detect and block the malicious domains, most modern domain reputation systems are designed to search for evidence of malicious activities exhibited by the domains. Evidence includes: malicious content such as malware, web pages with exploit code, web pages with driveby downloads, etc.; and malicious behaviour such as communicating with infected hosts to collect private information, to launch attacks, etc.

However, nowadays many malicious domains are only used for a very short period of time. The reasons for the short ‘live’ time are twofold. The first reason is to evade detection. In some cases, the malicious content/behaviour is only present/exhibited for a short time, thus making it very easy for detection systems to miss the evidence. In other cases, malicious domains have served most of their purpose by the time the malicious content is detected, hence the blocking of the domains is little help in defending against the attacks. The second reason is that the cost of registering a domain and setting up a server to host its content has become very low. For example, registering a common ‘.info’ domain with a domain name registrar such as GoDaddy.com costs only ten dollars per year. (Privacy protection costs another 10 dollars per year, but since many malicious domains are registered with stolen credit card information, privacy is not a real concern for attackers.)

In this work, we have done the following: 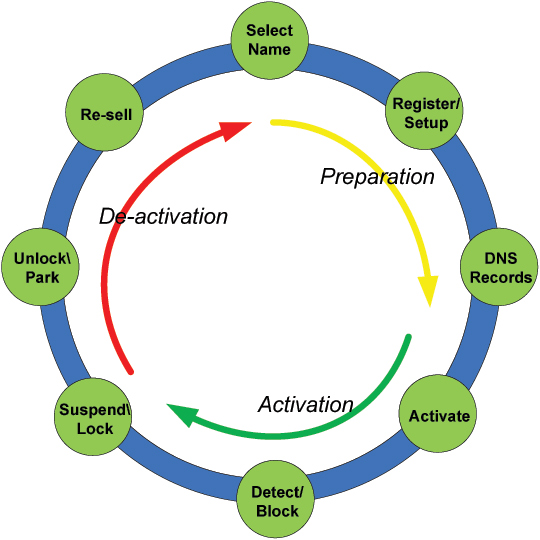 In the preparation and activation phases, for a malicious domain to be usable (i.e. publicly accessible and able to serve content), attackers need to perform the following actions: selection of a domain name, registration of the domain name (if it has not already been registered), creation of DNS records so that the domain name can be resolved to an IP address controlled by attackers, and the setting up of a server using the IP address to serve malicious content (e.g. exploit pages, driveby downloads, C&C server, etc.). These actions follow certain sequences:

The success of most popular attacks, such as DDoS, spamming, phishing and botnets, is dependent on many resources. These are often purchased. For example, domain names are registered or transferred for a price; bullet-proof servers are available for rent; large numbers of infected hosts are also available for rent. Some of the purchases are made through legitimate processes; others are made via illegal channels such as black markets, underground forums, etc. Many types of resources are made to be re-usable so that they can be resold multiple times to maximize financial gain. In fact, the re-use of valuable resources will become more and more prevalent given the fundamental underlying economic principles.

The re-use of resources across different attacks also presents opportunities for us to find connections between malicious domains. Using our knowledge of these connections, we can identify domains that are setting up and/or being prepared to be used for malicious purposes. We will dive into the details of how we exploit these opportunities in the following sections.

This section discusses how to predict malicious domains with the knowledge of their life cycle and re-use of resources. Based on the type of information our approaches leverage, the approaches can be categorized as follows:

We discovered the re-use of previously detected/suspended malicious domains in our malicious domain evidence monitor. The first characteristic is that the time interval between the previous use and the current use is, on average, over a year. Since these domains have previously been detected, then suspended, this time interval ensures that two requirements are met: the domain names are back on the domain name transferring market, and they have been cleared from DNBLs.

To find the domain names that are most likely to be re-used, we calculate a probability score of the domain being re-used.

This score is based on the domain name, TLD, changes in IP addresses and the price for domain transfer. When the score is higher than a certain threshold, we consider the domain is likely to be re-used for malicious purposes.

In general, the patterns we discovered fall into three categories:

It should be noted that not all of the domains found via DNS patterns are regarded as malicious. The domains have to be tested using two testing modules: a JS/HTML malicious content detector and a classifier based on features extracted from DNS records, AS, IP addresses, etc. If either tester returns a positive result, a domain is considered malicious. We acknowledge that prediction is a time-sensitive operation and that this extra layer of testing might lengthen the process, but we believe it is necessary to ensure the quality of predicted malicious domains.

Connections exist between malicious domains that have been used in different attack campaigns. We identified the following types of connections: 1) same name servers; 2) same IP addresses; 3) same registrant information. The existence of these connections is largely attributed to the re-use of resources. There are other reasons for the connections, e.g. embedding a pseudo identity of an attacker in the domain WHOIS information, multiple domains being registered using the same stolen credit card information, etc. For each type of connection, we first analyse the rationale behind the connection before we make use of it in our prediction.

To leverage the connection of using the same name server, we collect and maintain a known malicious name server list. We keep searching the Passive DNS (PDNS) data feed for domains that have NS records pointing to one of the name servers on the list. Any domain meeting this condition will be considered to be malicious.

The process of using the connection of use of the same IP addresses to predict malicious domains is similar to that of the same name servers. The challenging part is in accurately identifying the nature/functionality of the IP addresses so that we do not make false inferences

For registrant name, we apply a fuzzy match because we have noticed some very similar registrant names being used in different domains in the same attack campaign. For other information, although we have not observed cases in which attackers provide similar but not the same information to different domain names that he/she registers, we did not exclude the possibility of this happening.

DGA is used to evade domain reputation systems [2], but once the DGA algorithm is reverse-engineered, it can be used to generate domain names that will be used in the future. Existing works [3], [4] on DGA-based malware detection assume that DGAs are used dynamically to generate a list of potential rendezvous points. Based on this assumption, researchers have proposed various approaches to identify the DGA-generated DNS queries in network traffic. However, based on our analysis, we found that DGAs are embedded in malware for other purposes. For example, we noticed that some malware use DGAs to generate traffic ‘noise’ so that the real rendezvous points (e.g. C&C servers) or communication channels can be obfuscated.

Therefore, in order to use DGA in prediction, several problems have to be resolved. The first problem is how to find DGA malware. The second is how to filter out DGA algorithms that are used to generate noise so that the real malicious domains can be hidden. We discovered that not all the DGA-generated domains are used for communication. The third problem is how to leverage the DGA algorithm to generate future domains without reverse engineering (the limitation of manual process). The fourth problem is that DGA algorithms normally generate hundreds to thousands of domain names per day (with the majority of the names being NX domains), making the discovery of domains that will actually be used more difficult. For the sake of scalability, the solution to these problems has to be an automatic approach.

To solve these problems, we designed and implemented a system that can automatically detect DGA malware using sandbox-based malware detection techniques. We leverage the idea of black-box testing and virtual machine execution acceleration to 1) differentiate the purpose of applying DGA algorithms in different malware; 2) generate a list of DGA domains that will be used in the future. We also track the registration and the DNS query to find the domains that will be used.

In order to predict malicious domains, we need to use and collect large volumes of different types of data. We will describe in general how we obtain the data, and the statistics of the data.

In the second part, we check the PDNS data feed to look for the time difference between when we predict the domains and the time the domain names are queried.

In the third part, the predicted domain names are released in the form of DNS signatures that are used on a firewall to block matched DNS queries. After that, we check the log to find out which DNS signatures have been triggered.

We have analysed the results from over a month’s data. During this time, we predicted 2,172 domain names, of which 1,793 (83%) have a VirusTotal detection rate of more than one vendor. The results of searching for the domain names in the PDNS feed show that, on average, our predictions are eight hours earlier than the first time the DNS queries to domains show up in the PDNS feed. Checking the signature-triggering log shows that 1,145 domains are actually triggered after they are released as DNS signatures. (It should be noted that the signature-triggering logs are collected from only five firewall devices.)

In this paper, we proposed several approaches for predicting malicious domains. Our approaches are based on the observation that re-use of valuable resources occurs in setting up malicious domains, as well as the knowledge of the life cycle of malicious domains. We evaluated our approaches using a large set of data of different types, and the results suggest that these methods can predict malicious domains and could be used to effectively prevent attacks. In our future work, we will continue to look for more connections and evidence that suggest a domain name will very likely to be used for a malicious purposes.