Dridex in the wild

Dridex is a descendent of the Cridex malware. Its initial spread occurred in late 2014 via spam and the malware is still active in the wild today. Meng Su describes its working mechanism and how it gathers information and communicates with the C&C server.

Dridex is a descendent of the Cridex malware. Its initial spread occurred in late 2014 via spam and the malware is still active in the wild today. Dridex is a Windows executable which uploads system information to its C&C server before downloading a DLL. After the DLL has been installed by the executable, the C&C server will control the infected PC, sending it commands to carry out further harmful instructions. In this article, we will analyse the main executable, focusing on the following actions: obtaining APIs, getting server data, getting and encoding system information, and communicating with the C&C server.

All of the Windows APIs the bot uses are obtained by a function. The argument passed into this function is only an index. This ‘index’ is an index number of the API_Address array – the API-name-encode-data-block uses the same index value.

At first, the malware checks the API_Address array, which is initiated with a NULL value. If API_Address[API_index] is found with a valid value, the function returns the address. Otherwise the malware moves onto the next step.

In the second step, the malware decodes the API_Name from the API-name-encode-data-block with the API_index using an algorithm which is predefined by the malware itself. The decoded data contains two parts, DLL_index and API_Name:

The role of DLL_index is the same as that of the API_index. The malware has a DLL_Module array which is similar to the API_Address array and also a similar DLL-name-encode-data-block.

Note that the addresses of the LoadLibrary and GetProcAddress APIs are always the first two addresses obtained by the malware. The flowchart in Figure 1 shows the full logic steps of getting any single API address. 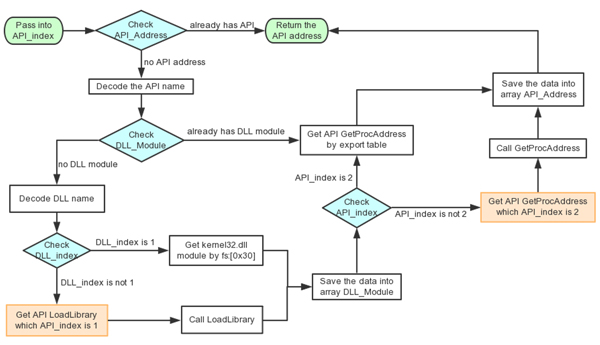 In this malware, the C&C server address is not stored as plain text. The malware uses the GetModuleHandleW API to locate the IMAGE_DOS_HEADER, and then locates the section header. It will find one section’s virtual address whose section name is ‘.sdata’ (Figure 2).

This section contains only 0x7A valid bytes. The first DWORD (0xA9E97561 in this case) is a key which is used to XOR the other 0x76 bytes. Figure 3 shows the content after it has been XOR’ed.

The ‘EncodedData’ is compressed by the aPLib algorithm [1]. The decompressed raw data is shown in Figure 4.

The first four bytes of this raw data indicate the length of the data behind it. Figure 5 shows the configuration of the server. The ‘botnet’ attribute shows the botnet_id; the ‘server_list’ tag shows the server URLs. 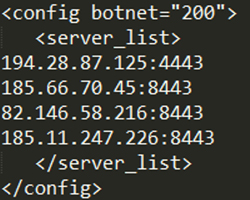 After getting the server URL, the malware will collect system information for further communication.

Getting and encoding system information

The collected information will be stored in XML format in two parts. The first part is composed as follows:

Meanwhile, the format of the other part is:

In the first part, the value of the ‘unique’ attribute records a string relating to three registry entries:

The malware retrieves the values of these three keys and combines them as a data block, System_Info, then calculates the MD5 of this data block. The malware also checks every character of the ‘ComputerName’ value. If a character is not found on a list which contains the Latin letters and some special symbols, it will be replaced with the character ‘?’. I think the malware author made a mistake here: there is no letter ‘D’ on the letter list and there is an extra ‘S’ – I guess that’s because ‘D’ is pretty close to ‘S’ on the keyboard and this was probably a typo. This means that the malware will replace ‘D’ with ‘?’. In the end, the changed ‘ComputerName’ value and the MD5 of the System_Info are joined with the character ‘_’ (Figure 6), then set with the ‘unique’ attribute.

In the second part, the content in ‘CDATA’ is the information about the installed software. The malware enumerates all the subkeys of HKEY_LOCAL_MACHINE/SOFTWARE/Microsoft/Windows/CurrentVersion/Uninstall and gets the value of their key name, ‘DisplayName’ and ‘DisplayVersion’. It will compose a string with the format ‘DisplayName_value (DisplayVersion_value)’ and connects every subkey’s string with the character ‘;’. It should be noted that the malware only recognizes English characters, so it changes the non-English characters to ‘?’.

The malware attaches a string, ‘Starting path: %d’, to the end of the connected string. Despite what its name may suggest, the content of ‘Starting path’ is not a real path of the malware. Instead, it is a figure indicated in the MIC (Mandatory Integrity Control [2]) level of the path which the malware located. There are seven levels: untrusted, low, medium, medium plus, high, system and protect process, which correspond to the values 1–7. If the operating system version is higher than or equal to Windows NT 6.0, the malware uses the GetSidSubAuthority API to get the MIC level. Otherwise, it sets the figure to 5. Figure 7 shows the raw data which will be sent to the server. 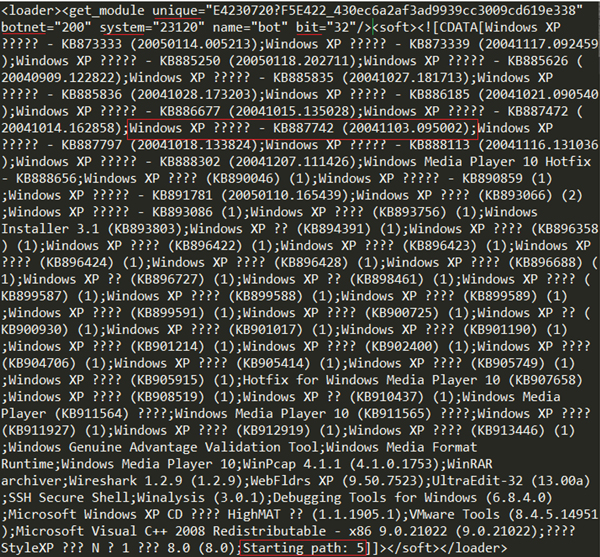 Figure 7. The raw data sent to the server.

Finally, the malware gets a random DWORD key and uses a XOR operation to encode the raw data of every DWORD.

The data received from the server is also encrypted. The first four bytes is a DWORD key which is used as the XOR key to decode the data after it by DWORD (Figure 8).

(Click here to view a larger version of Figure 8.)

The decoded data is encased in XML code which starts with a ‘<root></root>’ element. In the root node, there are two sub nodes, <nodes></nodes> and <module name="bot" bit="32"></module>. The content in the ‘module’ node is encoded with the BASE64 algorithm. Figure 9 shows a piece of the data after decoding.

Figure 9. A piece of data decoded with BASE64.

The first 0x80 bytes of the decoded data is junk code, after which is a DLL. The malware writes this DLL into a TEMP file whose directory is the same as the malware. Then it creates a registry entry: HKEY_CURRENT_USER/Software/Microsoft/Windows/CurrentVersion/Explorer/CLSID/%s/ShellFolder. The ‘%s’ is a GUID which is transformed from the MD5 of a variant of the System_Info data block (described earlier). The System_Info variant only adds a byte, 0x13, following the System_Info block. The value of this registry is encrypted by a customized algorithm. Its raw data is in the format <cfg net="%d" build="0"><startup>%s</startup><del>%S</del></cfg>. The value of the ‘net’ attribute is botnet_id, the content in the ‘startup’ section is retrieved from the ‘nodes’ section, which is sent from the C&C server, the content of the ‘del’ section is the path of the malware. Finally, the malware calls the CreateProcessW API to run the DLL with argument ‘rundll32.exe "<DLL_path>" NotifierInit’. The DLL has an export function, NotifierInit, and this DLL will carry out further orders received from the server.

By analysing the malware in detail, we have learned about its working mechanism and how it gathers information and communicates with the C&C server. We can now forge data and send it to the server, decode the response and check the server commands. In this way, we might obtain more commands for further research or obtain the latest variants in order to keep track of this malware.