'The survival of the fittest' applies in a large variety of fields. In cybersecurity it not only applies to detection mechanisms but also to the attackers, as they continuously need to update their arsenal and find more successful ways to attack. Here, 'more successful' does not necessarily mean more complicated, but may mean an attack which is reliable, modular and cheap, especially in cases where the attacker is not well sponsored.

In 2016 we saw the continuation of a general shift in the most commonly used attack vectors from exploits in browsers and plug‑ins to Office macros, with macros becoming the predominant carrier mechanism of threats including data exfiltration malware and ransomware.

Hence for a browser exploit to stay relevant, it not only has to compete against other exploits, but also against macros, zipped standalone JavaScript (as an email attachment), and other malware delivery mechanisms. A present-day exploit must be both reliable and sufficiently straightforward to be used by attackers who don't have an in-depth understanding of exploits. Once an exploit overcomes the challenges related to reliability and complexity, it holds an edge over macros in that it doesn't require any social engineering to be activated, as macros do.

Exploits for the CVE-2016-0189 vulnerability offer reliability, and with a working proof of concept that has decreased the effort required to fork new variants, it is little wonder that amongst the unique file hashes of exploits seen in 2016 (excluding those running on Android/Linux), CVE‑2016-0189 was the most commonly exploited vulnerability: 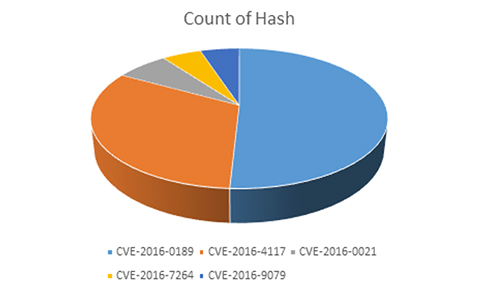 This vulnerability was first exploited in limited targeted attacks that affected computer users in South Korea [2] before Microsoft released a patch in May 2016. Theori's working proof of concept was released in June 2016.

The exploit is carried in an HTML page and can be hosted on any URL or can be sent as a standalone HTML page in an email. Any attempt to access the URL with a vulnerable version of Internet Explorer will result in the malicious code being run, which will be followed by the execution of a desired payload.

God Mode is an exploitation method in which VBScript code can escape the browser's sandbox. What makes it 'God Mode' is that there is no need to bypass Microsoft provided security features such as data execution prevention (DEP) and address space layout randomization (ASLR), as there is in usual exploits. Also, since there is no involvement of heap spray or return oriented programming (ROP), detection based on these techniques can potentially be evaded [3].

When VBScript code is executed in the Internet Explorer sandbox, the code is prevented from creating and executing files on the local system. This restriction is provided using a flag called 'Safe Mode' in the COleScript class of the VBScript engine. If this flag is bypassed or overwritten with a different value, the VBScript can run as if it is being executed on the local shell.

We have seen a similar exploit in the past, which used CVE‑2014-6332 to bypass the Safe Mode flag. CVE‑2014-6332 was used as a type confusion vulnerability, which allows out-of-bounds memory access. In contrast, CVE‑2016-0189 is a memory corruption vulnerability, which allows an exploit to corrupt objects and access full memory. By using these vulnerabilities, an exploit can bypass the Safe Mode and eventually execute malicious VBScript code in browsers' sandboxes.

The aim of this exploit is somehow to call an overridden ValueOf method, as shown in Figure 2.

However, in order to achieve this the attacker needs to perform a number of actions. First, the JavaScript calls a VBScript function named 'exploit' by passing an object 'o', as seen in Figure 2. This object contains a method, 'ValueOf'. The ValueOf function is overridden to trigger the vulnerability. We will come back to the 'o' object later.

Inside the custom 'exploit' function

Going back to the exploit() function, we can see in Figure 3 that it creates some variables and then creates an object of dummy class, which is nothing but a simple VBScript class. This dummy 'dm' object contains memory addresses which will be used to overwrite the Safe Mode flag. 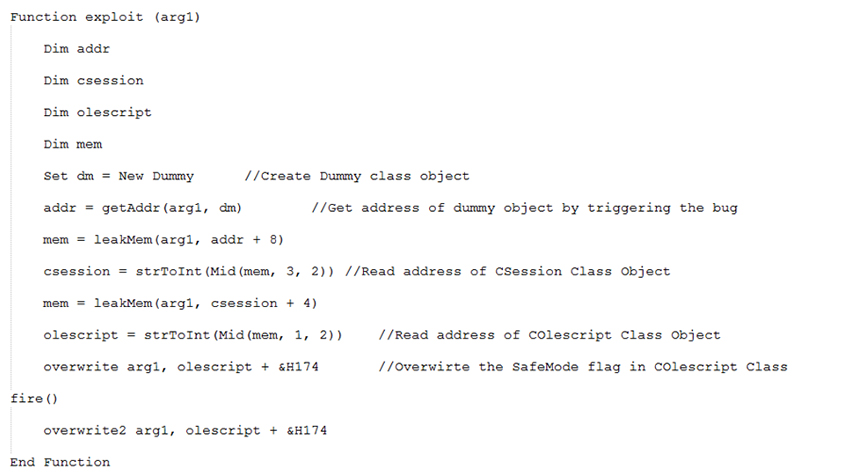 From the getAddr() function, the attacker needs somehow to reach to the overridden ValueOf method to trigger the bug. This is achieved by assigning an object 's' to the array (arg1, 2). Here, 'arg1' is the JavaScript object 'o', which we discussed earlier.

The code of the triggerBug function is shown in Figure 5.

Figure 5: VBScript function used to resize the array and trigger the bug.

The triggerBug function resizes the array length to A(1, 1), which is smaller. This will free some memory. Crafted strings are then created in this freed memory. The aw.A(arg1, 2) in the getAddr function still points to the freed memory where the dummy class object 's' will be written. This allows the address of the dummy object to be read using the crafted string.

Figure 6: Function used to leak the address of the CSession object and COleScript object.

At this point, the Safe Mode flag has been changed to '0x4', and now the VBScript can be executed in the browser in the same way as it is executed on the local shell. This allows the exploit to download and execute a malicious payload.

The exploit mentioned above was made publicly available as a proof of concept (POC) by Theori.

Since then, we have observed three variants of CVE‑2016‑0189 abused in the wild. These HTML pages are mostly hosted on Korean domains, which is not a surprise since exploits concerning Internet Explorer are often common in South Korea where it is a very popular browser. Following the God Mode exploitation, malware authors are taking one of the three routes shown in the flowchart in Figure 8. 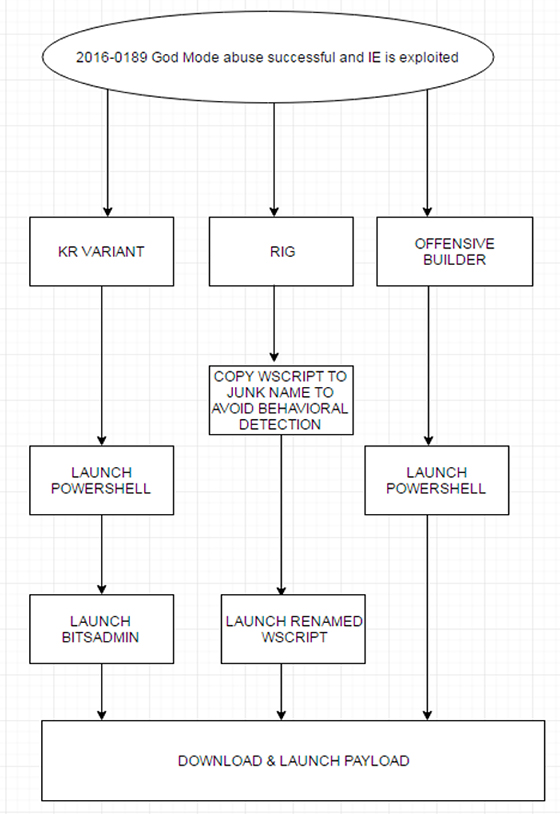 Figure 8: Flowchart showing the different approaches used by malicious kits to download and launch payloads via the CVE-2016-0189 exploit.

Note that the KR variant is better known as the Gongda exploit kit in the wild.

OffensiveWare Multi Exploit Builder is a cheap (US$50) exploit generation tool which has an option to generate God Mode HTML CVE-2016-0189 (see Figure 9). However, the software is easy to crack and anyone with a simple tweak can generate a working 2016-0189 without buying the licence for this tool. 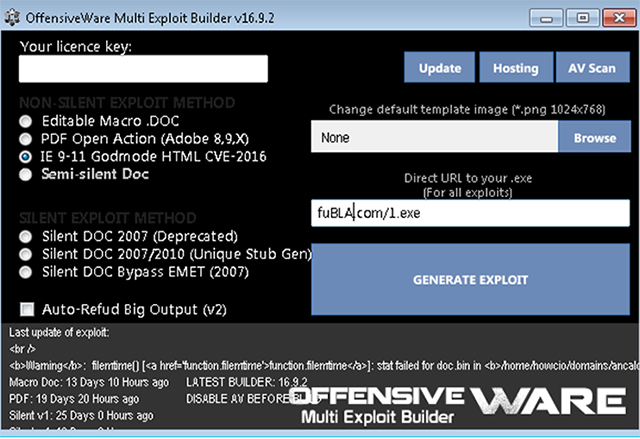 The CVE-2016-0189 generated is very much like the first POC created by Theori, as we can see from the sequence of events happening in Figure 10 (an Internet Explorer generic process is launched to run PowerShell, which further downloads and runs the payload). Eventually, the tool just takes the attackers' website URL in a text box and simply places it in the position required in the crafted HTML page without adding any extra obfuscation or evasion module. A quick and easy way to earn 50 dollars per 'customer' without much effort.

More mature exploit kits have added more content to the basic Theori POC to make their content undetectable both statically and dynamically. Static detection evasion is attempted by using obfuscation to hide obvious strings related to the exploit (Figure 11).

Evasion of behavioural detection has been handled by the Gongda and RIG exploit kits in two separate ways, as discussed below.

Using BITSAdmin in addition to PowerShell helps to add an extra layer of protection against behavioural monitoring as the payload will be created by svchost.exe and not PowerShell. This means that behaviour-based security software, which looks for file creation via PowerShell, can be bypassed.

This has already been seen in the case of a Cerber ransomware campaign where the evasion code was placed inside the macro, and now we see an exploit-generated attack using it [4], as shown in Figure 12.

The RIG exploit kit goes one step further as it first renames wscript.exe (Figure 13), so that any behaviour-based security software monitoring for wscript.exe via filename is bypassed. The sequence can be broken down into four steps, as follows:

After a good run in 2016, the usage of this exploit is expected to decrease, as it was patched by Microsoft some time ago. Furthermore, the future of such potential zero‑day God Mode exploits, which can run VBScript outside the sandbox, looks bleak, as Microsoft has decided not to support VBScript itself in Microsoft IE 11 edge mode [5]. Nevertheless, this exploit is expected to exist for some time longer in IE versions that continue to support VBScript.

From a detection perspective, static detection has the potential to be bypassed, as we have seen with exploit kits that have obfuscated the original POC. However, one can detect such threats by using behaviour-based alerts that trigger when Internet Explorer accesses the shell and performs an activity it is not generally supposed to perform.