Together with email [1], the web is one of the two major infection vectors through which organizations and individuals get infected with malware, and often the two go hand in hand, with email-based threats linking to web‑based malware. However, some attacks exist on the web only, and recently there has been an uptick in exploit kit activity, if not in the number of attacks then at least in the number of active kits: Malwarebytes' most recent report [2] lists five kits that were active at some point during the autumn.

To protect against such exploit kits, regular patching remains the best strategy and it is encouraging to note that automatic patching is becoming increasingly common. But as a backstop against forgotten or ignored patches, and as protection against web-based malware that uses social engineering, web security products are an important protection layer.

Though the prevalence of exploit kits is nowhere near its peak of a few years ago, the threat landscape remains varied, with more than half a dozen different kits seen during this test – suggesting there is still money to be made by cybercriminals this way.

All the known active kits were seen during this test with the exception of the very geographically targeted Magnitude. One particularly noteworthy kit was Fallout, a new exploit kit, first seen in August 2018 [3], that is based on the code of the old Nuclear exploit kit. Interestingly, we saw some instances of Fallout being missed in this test.

A large range of malware was observed in this test, including the new Kraken Cryptor ransomware [4]. 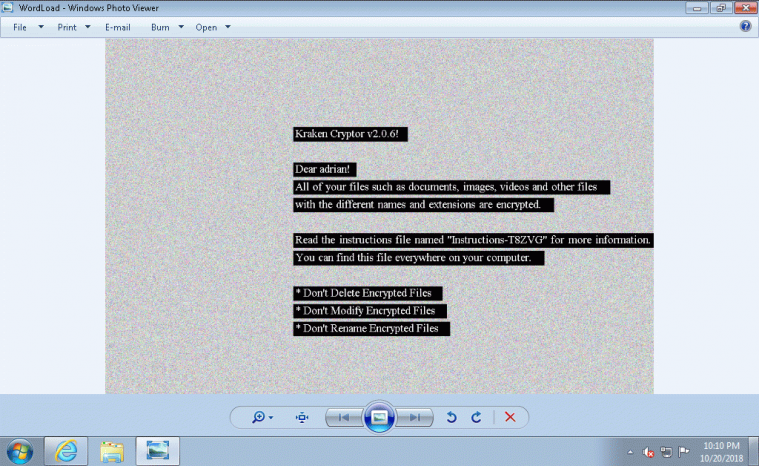 Thanks to the availability of free TLS certificates, we continue to see many threats using HTTPS to deliver their payload. Though the privacy implications of an organization intercepting HTTPS for its employees should be well understood, it is important to note that not doing so would mean that a not insignificant amount of malicious web traffic would bypass the security product in place.

The recent threat of web-based illicit cryptocurrency miners [5] continues to be seen; we spotted more than 450 instances of such threats during the test. However, despite the various obfuscation applied by these threats, we found that the products we tested blocked almost all of them.

As in previous tests, Fortinet's FortiGate appliance performed well in this test, easily achieving its seventh VBWeb award and justifying its customers' trust in the product.

However, FortiGate did have some issues with some of the earlier instances of the new Fallout exploit kit seen during the test, which reduced its drive-by download catch rate. There were fewer issues with later instances of the same threat though, and the product did block the increasingly common threat of malware downloads very effectively.

Kaspersky Lab is hardly a new name in IT security, yet the company's submission of Kaspersky Web Traffic Security to this test marks its first public participation in our VBWeb tests. The 6.0 version of the product was released in October 2018.

Its performance was impressive – it was the only product to block all exploit kits, and also blocked almost all direct downloads of malware. The product's first VBWeb award is thus fully deserved and Kaspersky's customers can feel confident in the product's ability to protect them from web‑based threats.

Trustwave's Secure Web Gateway product is a regular in the VBWeb tests, always performing well. This test was no exception, with high block rates in all categories.

There were some misses among earlier instances of the new Fallout exploit kit, but after that all instances of Fallout were consistently blocked. Yet another VBWeb award, the product's sixth, was easily achieved and the product's good reputation once again affirmed.

The test ran from 10 September to 23 October 2018 (with a short break in the early part of October when the team attended the VB Conference), during which period we gathered a large number of URLs (most of which were found through public sources) which we had reason to believe could serve a malicious response. We opened the URLs in one of our test browsers, selected at random.

In this test, we checked products against 257 drive‑by downloads (exploit kits) and 1,452 direct malware downloads. To qualify for a VBWeb award, the weighted average catch rate of these two categories, with weights of 90% and 10% respectively, needed to be at least 70%.

We also checked the products against 1,013 URLs that we call 'potentially malicious'. These were URLs for which we had strong evidence that they would serve a malicious response in some cases, but they didn't when we requested it. There could be a number of reasons for this, from server-side randomness to our test lab being detected by anti-analysis tools.

In the Q4 2022 VBSpam test we measured the performance of eight full email security solutions, one custom configured solution, one open-source solution and one blocklist.