This paper covers four techniques the malware authors used in the WeddingCake anti-analysis library to prevent reverse engineering. These include: manipulating the Java Native Interface, writing complex algorithms for simple functionality, encryption, and run-time environment checks. This paper discusses the steps and the process required to proceed through the anti-analysis traps and expose what the developers are trying to hide.

The sample Android application includes a native library to hide the contents and functionality of native code. The Java Native Interface (JNI) allows developers to define Java native methods that run in other languages, such as C or C++, in the application. This allows bytecode and native code to interface with each other. In Android, the Native Development Kit (NDK) is a toolset that permits developers to write C and C++ code for their Android apps [2]. Using the NDK, Android developers can include native shared libraries in their Android applications. These native shared libraries are .so files, a shared object library in the ELF format. In this paper, the terms 'native library', 'ELF', and '.so file' are used interchangeably to refer to the anti-analysis library. The anti-analysis library that is detailed in this paper is one of these Android native shared libraries.

In order to run a native method from Java, the native method must be 'registered', meaning that the JNI knows how to pair the Java method definition with the correct function in the native library. This can be done either by leveraging the RegisterNatives JNI function or through 'discovery' based on the function names and function signatures matching in both Java and the .so [4]. For either method, a string of the Java method name is required for the JNI to know which native function to call.

Characteristics of the anti-analysis library

Within the classes.dex of the APK, there is a package of classes whose whole name is random characters. For the sample described in this paper, the class name is ses.fdkxxcr.udayjfrgxp.ojoyqmosj.xien.xmdowmbkdgfgk. This class declares three native methods: quaqrd, ixkjwu, and vxeg.

The native library discussed in this paper is usually named lib[3-8 random lowercase characters].so. However, we've encountered a few samples whose name does not match this convention. All APK samples that include WeddingCake use different random characters for their class and function names. It is likely that WeddingCake provides tooling that generates new random names each time it is compiled.

The most common version of the library is a 32-bit 'generic' ARM (armeabi) ELF, but I've also identified 32-bit ARMv7 (armeabi-v7a), ARM64 (arm64-v8a), and x86 (x86) versions of the library. All of the variants include the same functionality. If not otherwise specified, this paper focuses on the 32-bit 'generic' ARM implementation of WeddingCake because this is the most common variant.

Key signatures of the ELF

There are some signatures that help identify ELF files as a WeddingCake anti-analysis library: 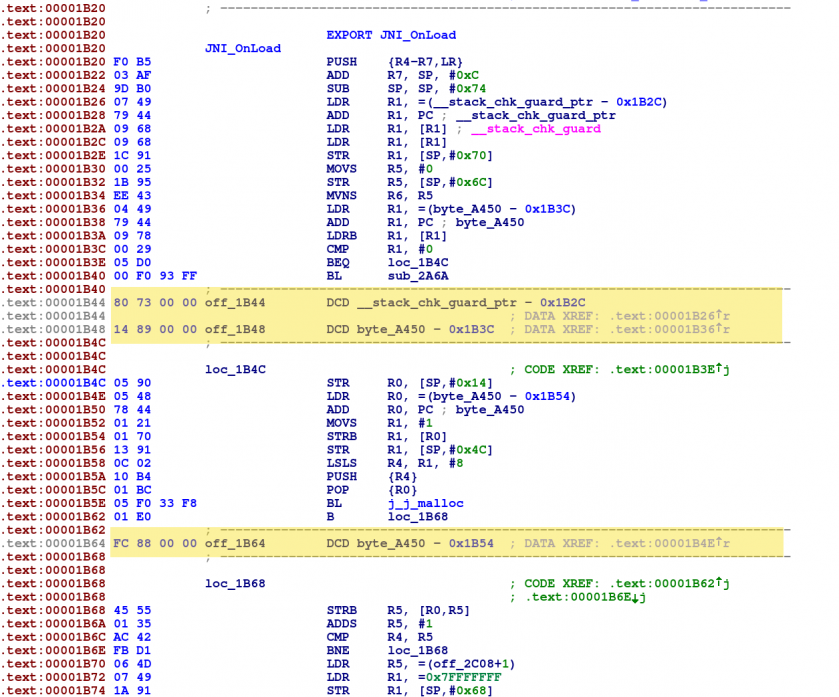 The JNI_OnLoad function is the starting point for analysis because there are no references to the native methods that were defined in the APK. For this sample, the following three methods were defined as native methods in ses.fdkxxcr.udayjfrgxp.ojoyqmosj.xien.xmdowmbkdgfgk:

There are no instances of these strings existing in the native library being analysed. As described in the 'Introduction to JNI' section, in order to call a native function from the Java code in the APK, the ELF must know how to match a Java method (as listed previously) to the native function in the ELF file. This is done by registering the native function using RegisterNatives() and the JNINativeMethod struct [5]. We would normally expect to see the Java native method name and its associated function signature ([Ljava/lang/Object;)I) as strings in the ELF file. Since we do not, the ELF file is probably using an anti-analysis technique.

Because JNI_OnLoad must be executed prior to the application calling one of its defined native methods, I began analysis in the JNI_OnLoad function.

In the sample, the JNI_OnLoad() function ends with many calls to the same function. This is shown in Figure 2. Each call takes a different block of memory as its argument, which is often a signal of decryption. In this sample, the subroutine at 0x2F30 (sub_2F30) is the in-place decryption function.

Figure 2: Calls to the decryption subroutine in JNI_OnLoad in IDA Pro.

Listing 1: The IDA decompiled code for the generation of the two arrays, byte_seed_array and word_seed_array.

Knowing that these arrays are static, an analyst could dump the arrays any time post-initialization, thus bypassing this anti‑reversing technique.

The overall framework of the in-place decryption process is:

I wrote an IDAPython script to statically decrypt the contents of the ELF so that reverse engineering could continue. This script and description is provided in the Appendix. 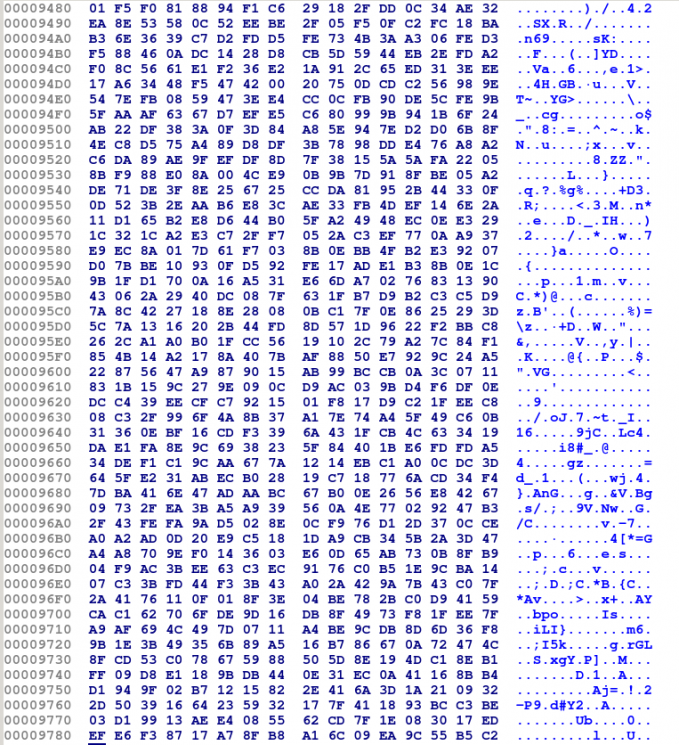 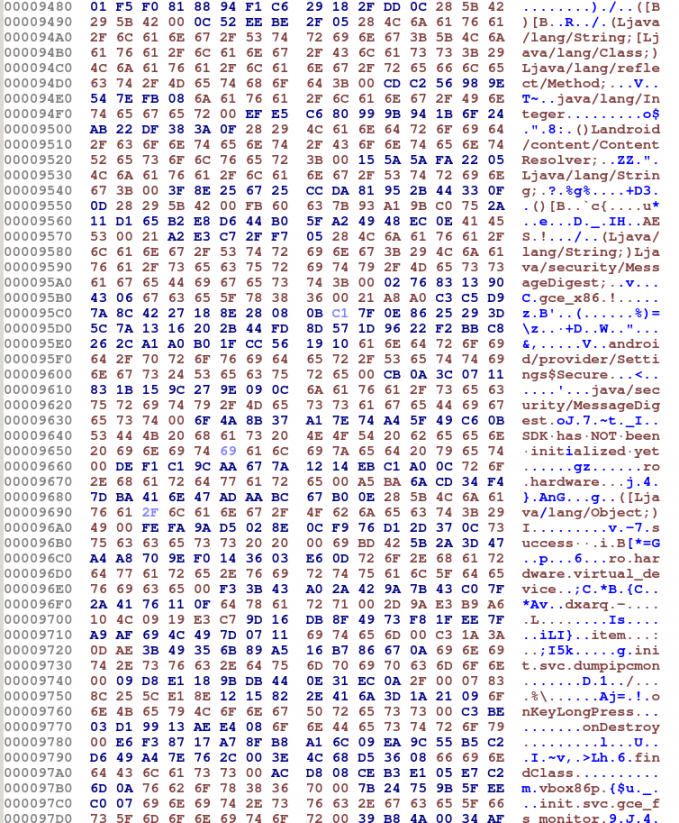 Within the decrypted strings of the ELF, we see the names of the native functions defined in the Java code at the following locations in the ELF file:

The Java-declared native method that has the same signature as vxeg has in this sample (([Ljava/lang/Object;)I), is responsible for doing all of the run-time environment checks described in the next section. In each sample, this function is named differently due to the automatic obfuscator run on the Java code, but it always has this signature. For clarity, the rest of this paper will refer to the native subroutine that performs all of the run-time checks as vxeg().

The Java-declared native method that has the same signature as quarqrd has in this sample ((I)Ljava/lang/String;) returns a string from an array. The argument to the method is the index into the array and the address of the array is hard coded into the native subroutine. The strings in this array are decrypted by the decryption function described above.

The rest of this paper will focus on the functionality found in vxeg() because it contains the anti-analysis run-time environment checks.

The Java classes associated with WeddingCake in the APK define three native functions in the Java code. In this sample vxeg()performs all of the run-time environment checks prior to performing the hidden behaviour. This function performs more than 45 different run-time checks. They can be grouped as follows:

If the library detects any of the conditions outlined in this section, the Linux exit(0) function is called, which terminates the Android application [8]. The application stops running if any of the 45+ environment checks fail.

Table 3: System properties checked and the values that trigger exit.

If the library has passed all of the system property checks, it (still in vxeg()) then verifies the CPU architecture of the phone on which the application is running. In order to verify the CPU architecture, the code reads 0x14 bytes from the beginning of the /system/lib/libc.so file on the device. If the read is successful, the code looks at the bytes corresponding to the e_ident[EI_CLASS] and e_machine fields of the ELF header. e_ident[EI_CLASS] is set to 1 to signal a 32-bit architecture and set to 2 to signal a 64-bit architecture. e_machine is a 2-byte value identifying the instruction set architecture. The code will only continue if one of the following statements is true. Otherwise, the application exits:

The anti-analysis library is verifying that it is only running on a 32-bit ARM or 64-bit AArch64 CPU. Even when the library is running its x86 variant, it still checks whether the CPU is ARM and will exit if the detected CPU is not ARM or AArch64.

Identifying if Monkey is running

After the CPU architecture check, the library attempts to iterate through every PID directory under /proc/ to determine if com.android.commands.monkey is running [6]. The code does this by opening the /proc/ directory and iterating through each entry in the directory, completing the following steps. If any step fails, execution moves to the next entry in the directory.

If the check for Monkey is ever true, exit() is called, closing the Android application (see Figure 5).

This method of iterating through each directory in /proc/ doesn't work in Android N and above [9]. If the library is not able to iterate through the directories in /proc/ it will continue executing.

In order to determine if Xposed is running, the library, checks if 'LIBXPOSED_ART.SO' or 'XPOSEDBRIDGE.JAR' exist in /proc/self/maps. If either of them exist, then the application exits. /proc/self/maps lists all of the memory pages mapped into the process memory. Therefore, you can see any libraries loaded by the process by reading its contents.

To further verify that the Xposed Framework is not running, the code will check if either of the following two classes can be found using the JNI FindClass() function [10]. If either class can be found, the application exits:

If the Xposed library is not found, the execution continues to the behaviour that the anti-analysis techniques were trying to protect. This behaviour continues in vxeg(). In the case of this sample, it was another unpacker that previously had not been protected by the anti-reversing and analysis techniques described in this paper.

This paper detailed the operation of WeddingCake, an Android native library using extensive anti-analysis techniques. Unlike previous packers' anti-emulation techniques, this library is written in C/C++ and runs as a native shared library in the application. Once an analyst understands the anti-reversing and anti-analysis techniques utilized by an application, they can more effectively understand its logic and analyse and detect potentially malicious behaviours.

[2] Getting Started with the NDK. Android. https://developer.android.com/ndk/guides/.

In order to decrypt the encrypted portions of the ELF library that the decryption function (for this sample, sub_2F30) decrypts during execution, I created an IDAPython script to decrypt the ELF. This script is available at http://www.github.com/maddiestone/IDAPythonEmbeddedToolkit/Android/WeddingCake_decrypt.py. By decrypting the ELF with the IDAPython script, it's possible to statically reverse engineer the behaviour that is hidden under the anti-analysis techniques. This section describes how the script works.

The script was written to dynamically identify each of the encrypted arrays and their lengths from an IDA Pro database. This allows it to be run on many different samples without an analyst having to define the encrypted byte arrays. Therefore, the IDAPython script is dependent on the library's architecture. This script will run on the 32-bit 'generic' ARM versions of the library. For the other variants of the library mentioned in the 'Variants' section (ARMv7, ARM64, and x86), the same decryption algorithm in the script can be used, but the code to find the encrypted arrays and lengths will not run.

Once the script has finished running, the analyst can reverse engineer the native code as it lives when executing with the decrypted string.