Ryuk is a ransomware family that, unlike regular ransomware, is tied to targeted campaigns where extortion may occur days or weeks after an initial infection. Ryuk was first observed in August 2018 and remains active as of July 2019.

Among its victims we find companies from different industries, including newspapers, restaurants, public institutions, and a cloud service provider. Ryuk has been observed as a second-stage payload delivered in campaigns that involved Emotet and Trickbot, two of the most widespread threats that are currently being used in malware campaigns.

Ryuk bears a strong code resemblance to the Hermes ransomware, and was likely developed and possibly distributed by the same threat actor(s). The code similarities found between Ryuk and Hermes – a payload that was allegedly linked to North Korean threat actors – led analysts initially to suspect that Ryuk was affiliated with the infamous Lazarus APT (Advance Persistent Threat) group. However, that attribution was discarded based on evidence that was collected from a dark web forum and the malware was later attributed to Russian-speaking actors possibly known as Grim Spider. This paper will review Ryuk's technical aspects and its evolution since its appearance.

After an infection, ransomware usually displays a file known as a ransom note, which contains payment instructions that the victim of the infection must follow in order to recover access to the information that was denied.

Between 2016 and 2017 we observed an enormous growth in ransomware, where new variants and/or families were found on almost a daily basis.

In 2018, there was a significant decrease in ransomware attacks. However, that didn't mean that ransomware stopped being a threat, it just meant that ransomware became quieter and more targeted. Instead of using massive email campaigns, ransomware started to be delivered via RDP (Remote Desktop Protocol). We can see this trend in ransomware families including SamSam, MegaCortex, LockerGoga, Dharma, BitPaymer and Ryuk. 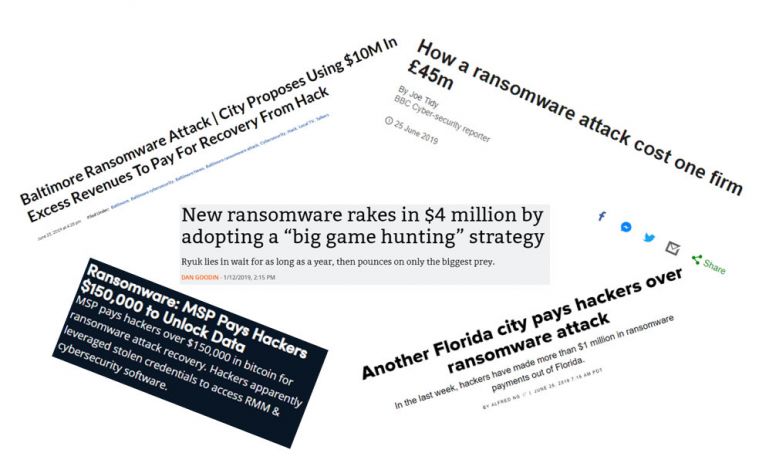 The news headlines in Figure 1 showing that victims are paying to recover their files confirm that ransomware remains a profitable threat – particularly when threat actors modify their approach to a more targeted campaign.

Ryuk is a crypto-ransomware that was first mentioned in a Tweet on 17 August 2018. It used 'RyukReadMe.txt' as a ransom note, hence the name. Ryuk is also the name of a fictional character known as Shinigami (God of Death) in a manga and anime series called Death Note. 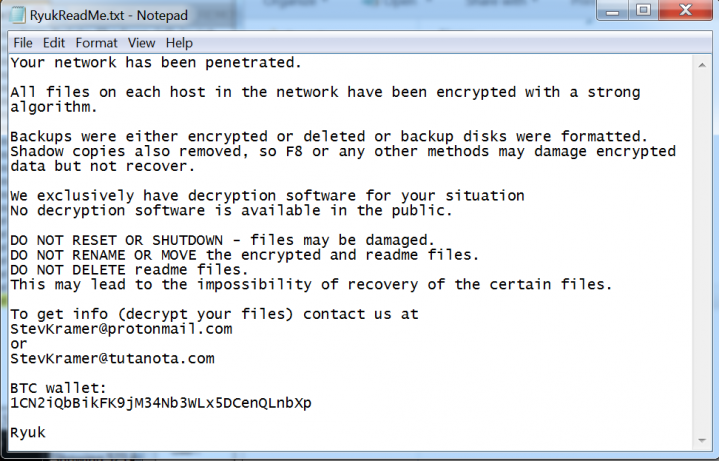 At the time Ryuk was first reported, it had already hit three companies in different countries, and researchers pointed out that Ryuk was based on the infamous Hermes ransomware's source code and that it used the same ransom note format as BitPaymer.

The Hermes ransomware was used by Lazarus, a North Korean-sponsored threat actor group active since 2009. Due to the attribution of Hermes to Lazarus, researchers believed that Ryuk was also related to Lazarus. 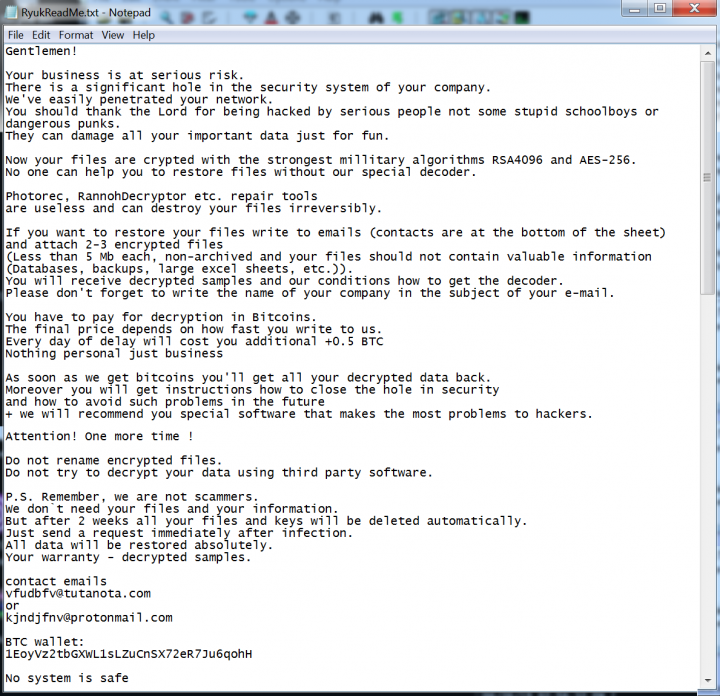 In January 2019, Ryuk's supposed attribution to North Korea was discarded, based on the fact that Hermes code was offered in underground forums, and was attributed instead to Grim Spider. Grim Spider is suspected to be a cell of WIZARD SPIDER, a Russian-based group that spreads Trickbot, another banking trojan that evolved into a modular threat and was focused on wire fraud. 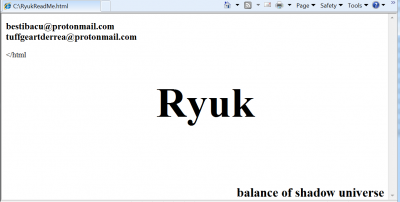 In April 2019, threat actor FIN6 was found to be using the LockerGoga ransomware and Ryuk in an attack against a company within the engineering industry. In addition, a campaign using Emotet to download Trickbot was observed delivering Ryuk.

In June 2019, Ryuk added an IP blacklist to avoid infecting hosts that had particular IP addresses.

Based on bitcoin transactions, we calculate that the threat actors behind Ryuk have been paid almost US$4 million since August 2018.

Ryuk is sold as a toolkit for threat actors that want to build their own malware. This means that there are as many variants as there are threat actors who bought the code to generate their binaries. 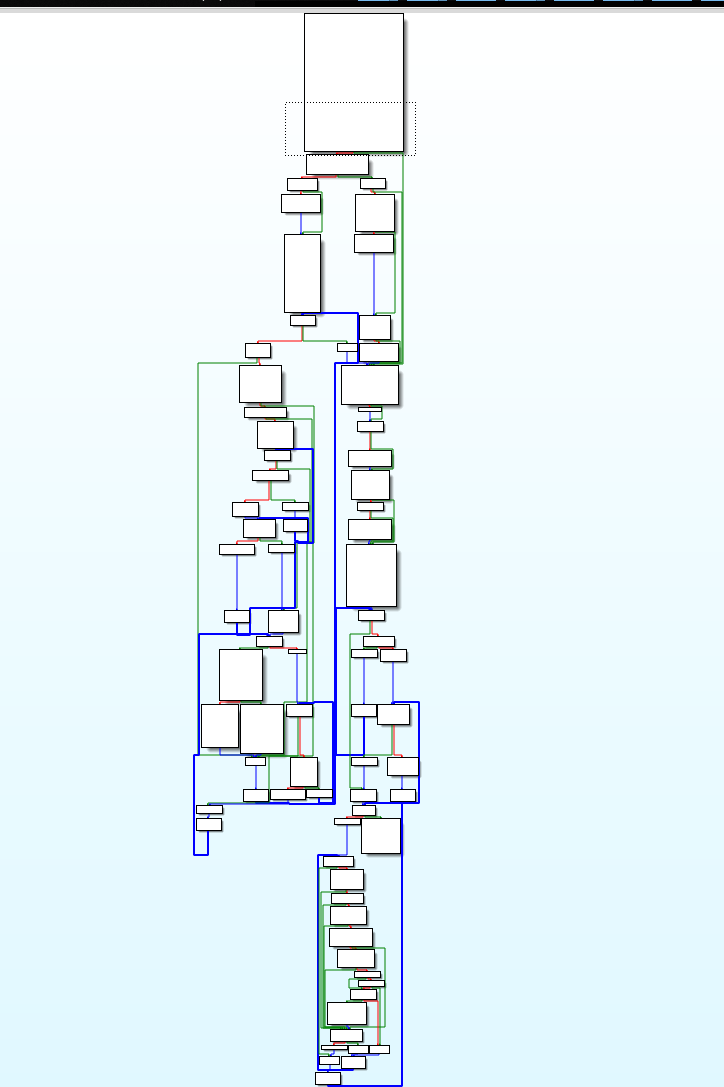 Most of the binaries are 64-bit, and only a few are 32-bit. After executing Ryuk samples that had different but similar PDB strings, these are the main characteristics we found:

Ryuk was first attributed to the North Korean APT group Lazarus because of code similarities shared with the Hermes ransomware.

A few months later, that theory was discarded as the Hermes ransomware's code was found being offered in underground forums by a Russian-speaking actor, which means that any threat actor could have modified the code to create Ryuk.

Ryuk was also attributed to a threat actor or group that use the handle 'CryptoTech', who claimed on the dark web forum exploit[.]in that they had developed Hermes and that they were going to release a new version. A month later, a new modified version of Hermes started to appear, which fits the timeframe for the new release mentioned by CryptoTech. This modified version is Ryuk.

CryptoTech defended themselves in Russian and announced in June 2018 that they would release a new version of Hermes.

Ryuk has also been attributed to Grim Spider, which consists of a single group or group of smaller groups that rent Trickbot on an access-as-a-service basis to deliver Ryuk.

We collected almost 600 samples of both Hermes and Ryuk to try to determine a relationship between the two malware families.

The chart in Figure 8 represents when each of the samples was compiled. Between June and July 2018 there was a cessation of Hermes activities and then Ryuk appeared. That time fits the moment in which the user with the handle CryptoTech defended against accusations that they were selling Hermes without being its developer.

Ryuk continues to be an active threat, as newer versions of this family continue to be released. The new version of Ryuk released in June 2019 did not have any significant changes in terms of ransomware infection code or file encryption compared to the previous one. The core functionality remained unchanged while adding features to avoid detection.

After Ryuk emerged, CryptoTech went quiet on a highly vetted Russian-speaking cybercriminal forum, while in the past they had posted advertisements in both English and Russian.

In March 2019, Ryuk ransomware infected the machines of Rural Jackson County, Georgia. It was stated that the county paid $400,000 in ransom. These types of high payouts are likely to encourage threat actors to conduct more campaigns delivering Ryuk and other targeted ransomware.

The following files were detonated and analysed for this paper: