The Kimsuky group is a threat group that is known to have been behind the KHNP (Korea Hydro & Nuclear Power) cyber terrorism attacks of 2014 and is still active in 2019.

Since 2018, we have been profiling and tracking spear-phishing emails and malicious code related to the Kimsuky group.

The spear-phishing emails used by the group have been determined to have the purpose of stealing web portal account information and delivering malicious code. The main targets are government and military officials, as well as journalists.

We have analysed the changing behaviour of the Kimsuky group through ongoing tracking of the IoCs related to Kimsuky, including simple account hijacking.

In this paper, we present the results of an analysis not only of the malware used by the Kimsuky group but also of server-side samples (tools and templates that send out spear-phishing emails, like a phishing rod) which we recently investigated.

We have also confirmed that the C&C server used for the earlier attack continues to be used for various purposes, such as distribution of malicious code, logging of infections, and sending phishing mail.

In September 2013, Kaspersky Lab announced an APT attack targeting major Korean agencies [1]. According to the data, the Kimsuky group was using malicious Hangul documents, like other attack groups targeting Korea, and the attack featured remote control tools (such as Team Viewer) and communication channel configuration using webmail. In February and March 2014, attacks that seemed to have been carried out by the same group against Korean public institutions continued to occur [2].

In December 2014, an attempt was made to destroy PC disks by sending 5,986 spear-phishing emails to 3,571 employees of Korea Hydro & Nuclear Power Co., Ltd. However, only eight PCs were infected with malware, of which five hard disks were initialized.

In June 2015, a number of web portal email accounts were hacked, sending emails with malicious Hangul document files and phishing emails to steal portal account credentials. In January 2016, a large number of emails with malicious attachments were sent under the guise of ‘Office of National Security at the Blue House’ to government research institutes. Analysis by related organizations identified the malicious attachment as Kimsuky malware [3].

In January 2019, an email suspected to be carrying malicious code was sent to dozens of journalists, most of whom were covering South Korea’s ministry in charge of relations with North Korea, prompting an investigation into the incident. The email, which was entitled ‘TF reference info’ and had a compressed file attached, was sent to more than 70 reporters, most of whom were members of the unification ministry’s press corps. It was sent through a private email address from a person named ‘Yoon Hong-geun’. The ministry suspected that it contained malicious code designed for hacking [4]. This issue was known variously as Operation Cobra Venom [5], Operation Kitty Phishing [6] and Operation Kabar Cobra [7].

The Kimsuky group created a mailing toolkit for attack and used it repeatedly. We found that, when constructing phishing pages for account takeover, they reused the existing source code of the original site and specific arguments in the URL. 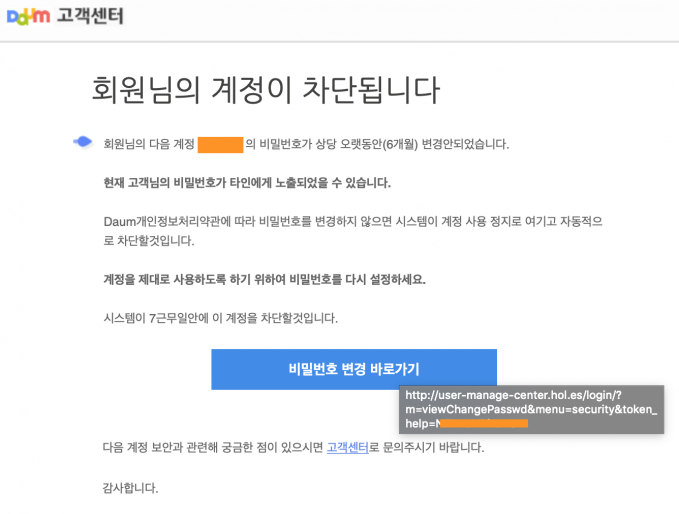 Examples of the flow of malware used in spear-phishing attacks are shown in Figure 2. Figure 2: The flow of malware used in spear-phishing attacks.

A classification of the attack tools used by the Kimsuky group is shown in Table 1.

The attacker and defender are on different sides [8]. In addition, an attacker who continues to attack does not have a good understanding of defence. There can be a difference between an attacking position and a defending position.

After all, attackers are also in the position of developing malware and server-side toolkits.

Attackers who develop various attack tools are in the same position as those in general development. While working within a limited timeframe and with limited resources, information leakage and vulnerabilities can occur naturally due to code reuse or C&C server operation mistakes.

In the course of investigating and analysing the C&C server, several security weaknesses were discovered, which provided us with good information for investigation and tracking. We will look at the following cases of OpSec failure: 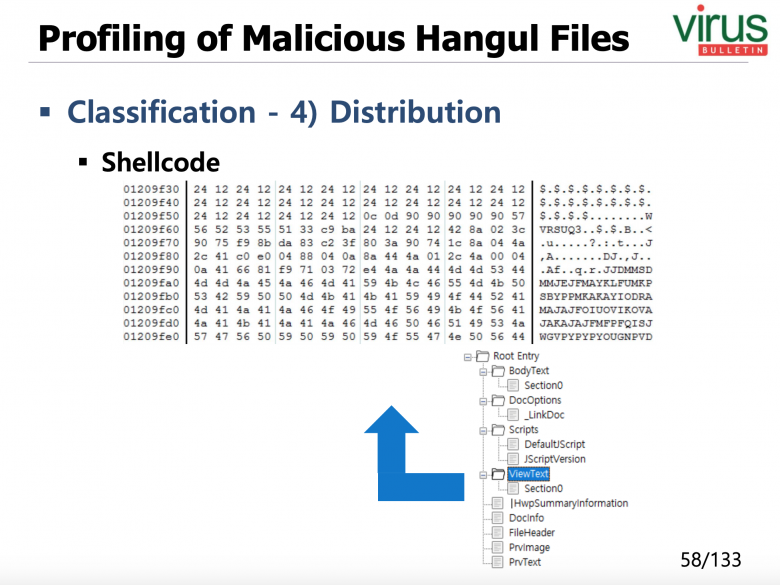 The overall flow of the sample is as follows [11].

The malware fontchk.jse records the infection information (date, time, IP address, MAC address, etc.) in the path [C&C]/update/fonts/log.txt, as shown in Figure 6. In this way, the files (including the malware) and log files that exist on the C&C server can easily be obtained. 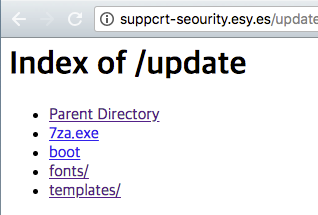 Figure 6: Fontchk.jse records the infection information in the path [C&C]/update/fonts/log.txt.

Since a lot of resources are required to build and verify (check the actual operation of) the C&C servers used by attackers, we monitor them continuously, based on the assumption that they are likely to be recycled (reused) rather than being used once and then destroyed.

The C&C server leaked its directory listing and didn’t have proper access control, so it was possible to check the remaining logs following an infection.

Previously, we analysed C&C servers, and we saw that the MAC address is used as the directory path. Using this information, we were able to obtain additional malware by using the MAC address written in the infection log. Figure 10: The file had four-byte XOR encoding (key: 0x09FD8477) a PE file was obtained through decoding.

The original DLL name identified in the four-byte XOR-decoded malware is HanyangUpload_script.dll.

The function of the malware (HanyangUpload_script.dll) is as follows: Among the tools described above, this malware is camouflaged as an HWP document [13]. At the time of analysing the malware, additional malware was downloaded from the C&C server.

Figure 16: Additional malware being downloaded from the C&C server.

As in the previous case, we continued to monitor the server, based on the assumption that the attacker would reuse the C&C server they had built.

As a result of our continued monitoring, we confirmed that a new file was uploaded to the C&C server on 2019-04-01 (D+42) and conducted further investigation and analysis.

The C&C server (primary-help[.]esy.es) is also a directory listing as shown in Figure 8.

We checked that the new files, mail.php and mail_ok.php, were uploaded to the C&C server.

Figure 18: The new files were uploaded to the C&C server.

We confirmed that these files are tools for sending mail (i.e. mailers).

If we enter the sender and receiver information (name/email), title and contents and select ‘COMMIT’, then we can confirm that mail.php is a mailer – the actual operation is performed by mail_ok.php. 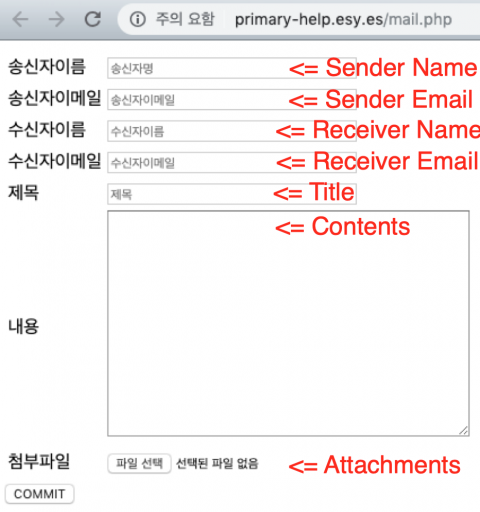 Figure 19: Mail.php is a mailer. The actual operation is performed by mail_ok.php.

When using the mailer, the mail was indeed sent the normal way, but with new malware attached. Figure 20: The mail was sent normally and new malware was attached.

In addition, we confirmed that the web beacon was applied to check whether the mail was read, using reading.php defined in the <img> tag in the mail sent by the mailer.

Figure 21: The web beacon was applied to check whether the mail was read.

Among infostealers used by the Kimsuky group, some samples have been found that use FTP to download additional malware after logging infected targets to the C&C [14, 15].

The malware uses the Hostinger free hosting service as a C&C server, and there is a security weakness in that the account (u428325809 ) and password ([email protected]#) used for FTP communication are exposed in plain text. 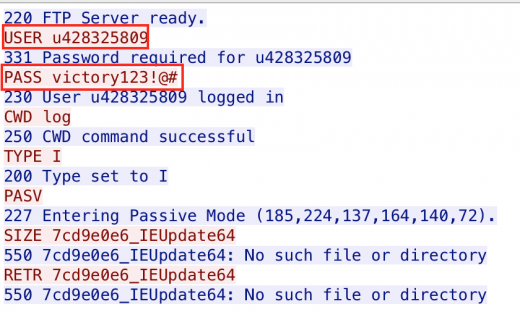 The same (or similar) FTP account information was identified in the other malware found after this malware (2019-04-03).

Figure 23: The same or similar FTP account information was used.

The FTP account information used in the malware can expose the C&C server to attacks. The string ‘victory’ used in the password has also been found in the b374k webshell used by the Kimsuky group.

We captured the situation where the mailer and attachments used the same C&C server (member-authorize[.]com) when the Kimsuky group also sent attachments with spear-phishing emails. The C&C server had directory listings enabled, and there was a file download vulnerability in download.php, the file used to downloaded the .hwp attachment.

Figure 26: Index of the /security/downloads directory on the C&C server.

The attacker has built a mailer in the path of the name of each phishing target.

The mailer was found on the C&C server just as in the first OpSec failure case. In the process of tracking the Kimsuky group attack, we analysed the relationships of a large quantity of data, and investigated C&C servers located in South Korea through an investigation agency. Figure 29 show the associations that were found between the toolsets and C&C servers classified in our research. 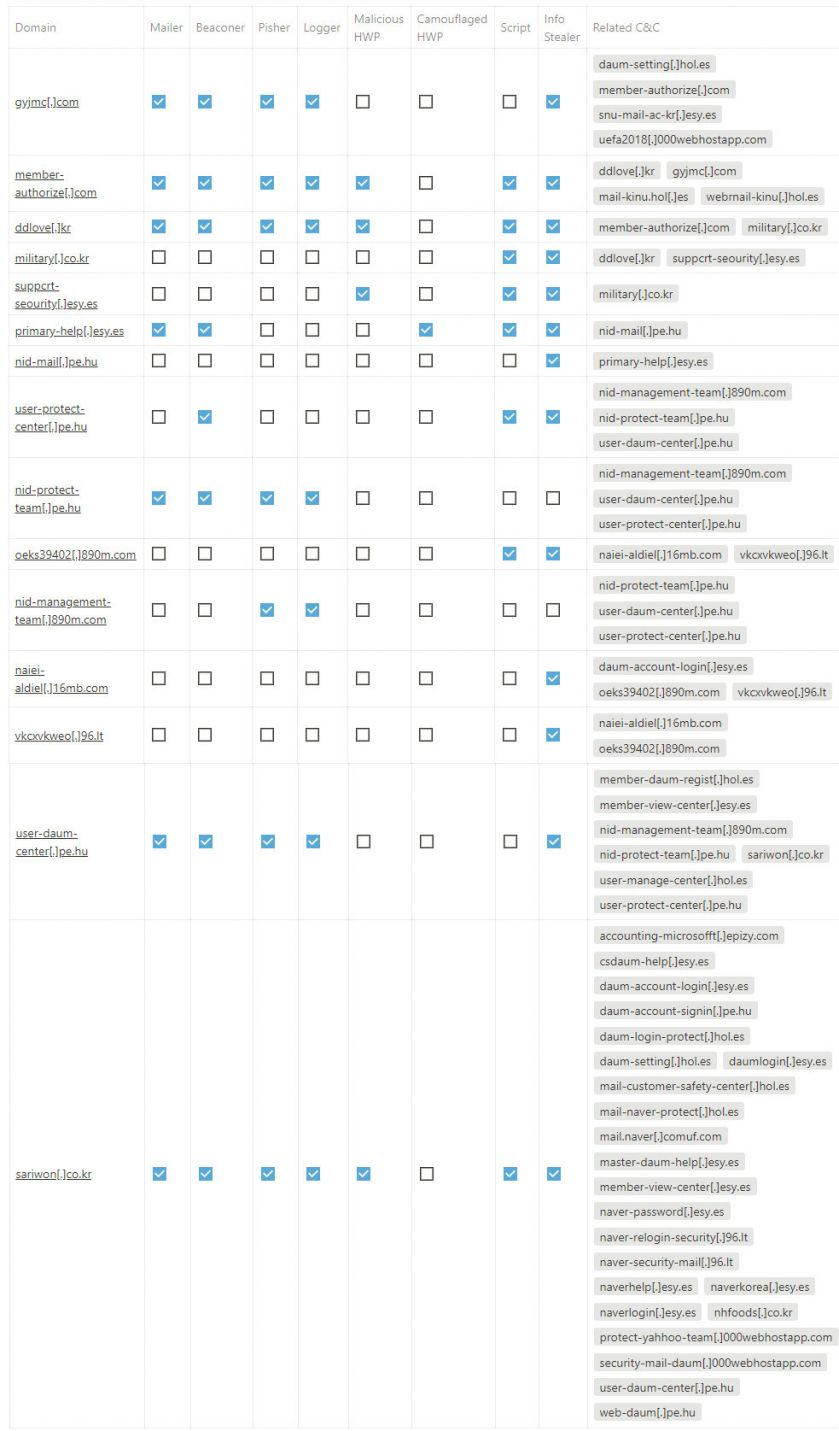 Some of the results of analysing the relationships between toolsets and C&C servers used by the Kimsuky group in spear-phishing attacks are as follows.

Figure 30 shows a graphical representation of the relationships. 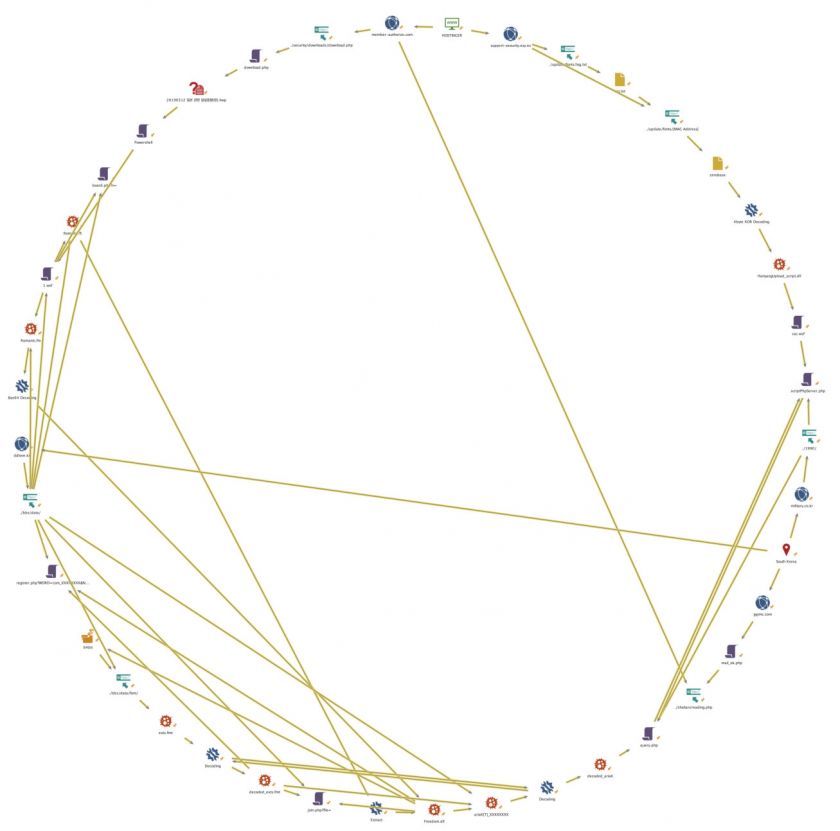 Through its reuse of resources, we were able to track the attack performed by the Kimsuky group.

Due to the particular circumstances of South Korea, the Kimsuky group continuously conducts malicious acts by abusing (or camouflaging) documents created in Hangul and phishing for email account credentials in order to hijack accounts. Similar attacks have continued.

However, in the process of tracking the Kimsuky group, we have obtained various pieces of important information through cases of OpSec failure on the part of the attackers.

The information obtained in this way can be used to infer to what extent the next attack will proceed, and, if such a new spear-phishing attack occurs, the appropriate proactive response can be taken by analysing correlations with various indicators found in previous attacks.

We will continue to strive to prevent the future spread of spear-phishing attacks by the Kimsuky group, and we hope that this paper will help in responding to threats in many areas including domestic.