Excel Formula, or XLM – does it ever stop giving pain to researchers?

Last week I received a new sample using the xlsb file format that supposedly contained malicious code. I had a quick look, and wow – this was different. An initial check on VirusTotal (VT) showed that it hadn’t been uploaded to VT yet. So, with nothing to go on, I started looking into the sample. 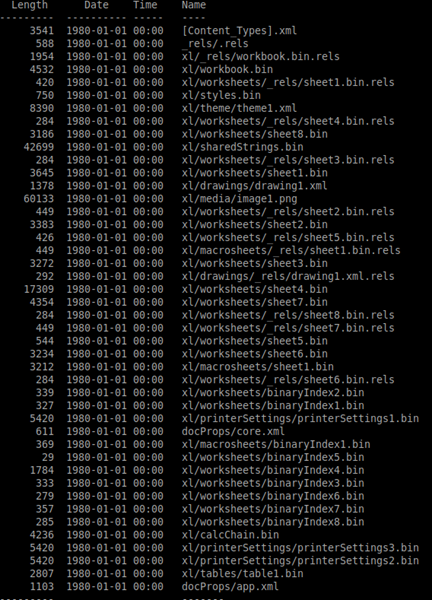 The next record is BrtWsProp with recordId 147 and length 23.

Now you can parse all the records and get a nice list. Unfortunately, when parsing the records of the xl/macrosheets/sheet1.bin I see nothing unusual.

So we move on to look at the other sheets, what can we find here? Quite a lot actually. The records we are interested in, while we learn, are:

Let’s have a brief look at the data we need.

Microsoft has documented this well in a PDF. To start with, it contains an eight-byte cell information structure, a variable XLWideString (which looks like a Unicode string), two bytes of grbitFlags, and then you get to the formula itself (CellParsedFormula structure).

The first one you’ll find is this:

After decoding, we get this:

The record has no information about the row, so you need to get this from the BrtRowHdr record. When you get to the CellParsedFormula structure you parse it (as mentioned in my previous article).

This record also starts with a eight-byte cell structure, then a one-byte fErr, and two-byte grbitFlags before you reach the formula itself (CellParsedFormula structure).

When you parse the first record of this stream you’ll get:

This is a simple structure, but for now we just want the row.

The first DWORD gives you the sequence you need (in this case, 2).

When you have parsed all these records from all these binary worksheets, you’ll end up with a virtual sheet that looks like this:

This is more informative, but it was a bit of work to get there. At least it is context you can relate to.

As I am writing this article I see that VT has received a copy of the sample, and that when it was first checked (on entry) a single engine was detecting it:

I think my little project is over – when I have a problem like this I can’t let it go until it’s solved, but now I can finally relax!

Get in touch with me if you need help! I think tools should give this kind of context automagically.