No malware author wants their piece of code to be easy to detect. The journey of detection evasion started nearly as long ago as that of malware itself, when security solutions were in a nascent state, providing static hash-based detection. Over time, several different approaches have been put into action to detect malware, and in response, malware authors have put into action different methods of evading them. In this paper we will discuss a few such evasion techniques that have been observed recently.

With an increasing number of malware families using a PowerShell script to download their payload, PowerShell has become an important process for security software to monitor, and a close eye is kept on any file downloaded or created by PowerShell.exe. As a result, the macros delivering the Cerber ransomware have been adapted to use PowerShell's Background Intelligent Transfer Service [1] module.

The initial download technique uses 'System.Net.WebclientClass.DownloadFile', and we can observe the payload being created by PowerShell (Figure 1). This can easily be spotted by a behavioural security solution that monitors file creation.

Figure 1: We can observe the payload being created by PowerShell.

The second technique is similar to the first, but we use PowerShell's Background Intelligence Transfer Service module. The result is that, this time, the payload is created by svchost.exe (Figure 2), which is one of the most common methods of file creation, and it is likely that behavioural engines will ignore such a benign-looking event.

Figure 2: The payload is created by svchost.exe.

After simple decryption and de-obfuscation, we can see that the Cerber ransomware macro code works along very similar lines, as shown in Figure 3.

One popular approach used by security software during the advent of macro malware was to extract the macro code section, leaving aside the forms user interface and decoy document. However, this was based on the assumption that malicious code was stored inside the code section, and malware authors quickly worked out that they could bypass detection by forcing suspicious code into the GUI forms attributes, with the macro code simply calling the code section from forms. This meant that the macro code wouldn't contain anything suspicious when extracted and analysed in isolation by a malware researcher or a scan engine.

Figure 4: Locky hiding malicious code in a form attribute, ControlTipText. Malicious content can be stored in any of the Form attributes and can be called from the macro code.

After a number of malicious documents started using this trick, researchers/scan engines started parsing the macro form content as well. In response, malware authors once again upped their game, this time removing the suspicious code completely from the macro and hiding it instead in the document's metadata details. 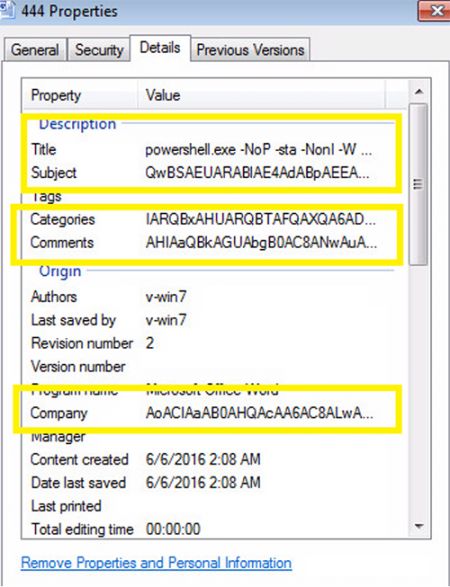 Figure 5: Suspicious code is hidden in the document's metadata details.

The encrypted PowerShell code is broken into various parts and added to metadata of the .doc file. The macro's purpose is simply to call these metadata, concatenate and run them.

Figure 6: The macro calls the metadata, concatenates and runs them.

When it comes to checking the authenticity of a file type, the file extension lost its reputation a long time ago thanks to innumerable malicious attempts at fake file extensions. For this reason, most static and behavioural approaches now include parsing the file and checking for the magic header – for example an MZ check for a binary.

One simple way to keep check of macro malware is to check whether WinWord.exe or any MS Office process downloads a file known to be an executable.

Figure 7 shows Dridex using a combination of two tricks. First, the code is hidden in the forms text box user interface. Secondly, the macro downloads a file with a .pfx extension which doesn't contain the MZ magic number. The payload is a pfx file, and has an unknown format.

The TVqQAA is the Dridex payload completely encrypted in base64. [TVqQAAA....] is the MZ header in base64. Following this download, the Windows inbuilt Certutil tool is used to base64 decrypt this pfx file to reveal the actual payload.

Most malicious PowerShell scripts don't want to run in view of their victims, and prefer to run in hidden mode (for obvious reasons). Running a PowerShell script in hidden mode is very easy, we just need to add the '-hidden' switch. Unfortunately for malware authors, cybersecurity researchers picked up on this too. As a countermeasure, malware authors came up with a way to hide PowerShell without actually 'hiding' it: they assign the visual coordinates of the PowerShell window such high values that it will always be beyond visibility in a normal‑sized monitor.

Here we see the malware changing the X and Y coordinates of the console to very high values, X= 0xc000 and Y= 0xc000, which will lead the PowerShell window to open outside the screen – or in other words, in hidden mode:

Attempted Bypass of Behavioural Signatures – I

Nearly all malware attempts to be persistent in order to be more effective. One common way to do this is to add the payload to the Windows StartUp folder. However, this event is closely monitored by security software (see Figure 9).

Figure 9: A common way to achieve persistence is to add the payload to the Windows StartUp folder.

To bypass detection, the malware authors try a simple trick: they break the event into a series of steps:

The SysInternals package is one of the all-time favourite toolkits among malware analysts. The kit also includes the junction.exe file to create path aliases:

This way, persistence can be achieved without triggering detection based on the addition of the payload to a well known persistence location.

Evasion is no longer limited to fuzzing. With the security industry evolving towards behavioural and other new methods of detection, the bad guys will try to find a way to evade any sort of detection logic.

This journey of evasion, which started with hash fuzzing, packers and anti-debugging, has evolved to bypass behavioural detection attempts.

On the positive side, these evasion methods themselves can sometimes be good detection logic for security vendors.