Web application vulnerabilities are an important entry vector for threat actors. According to the 2019 Verizon Data Breach Incident Report [1], web applications, privilege misuse and miscellaneous errors account for 81 per cent of breaches of retail organizations.

In a paper we presented at VB2019 [2], we detailed query and parameter integrity algorithms used to detect SQL, NoSQL and OS command injection exploitation. In this follow-up paper, we detail algorithms that can be used to detect SQL injection in stored procedures, persistent cross-site scripting (XSS), and server‑side request forgery (SSRF) by instrumenting web applications. Server-side request forgery allows a threat actor to access internal resources by leveraging a vulnerability in Internet-facing web applications – which can be identified by data flow analysis. SQL injection in stored procedures will lead to an additional clause in the executing SQL query, and persistent XSS in the database will lead to HTML elements in the executing query. This additional code, in the form of SQL clauses or HTML elements due to the injection-based exploitation, lays the foundation for the detection algorithms that are discussed in this paper.

If the @user variable is admin’-- and the password is none, the query becomes:

If there is a username admin, the query will return true and authentication will be successful.

In order to detect SQL injection in stored procedures, honey SQL queries are used. The following are some of examples of honey queries:

The arguments passed to the stored procedures are extracted and inserted into honey queries. If an argument is inserted in the first honey query, the normalized honey SQL query will always be SELECT * WHERE id = $1 AND honey_value = $2 and the parse tree of the normalized first SQL query will be as shown in Figure 2. The argument of the stored procedure will always be data and not an SQL clause. 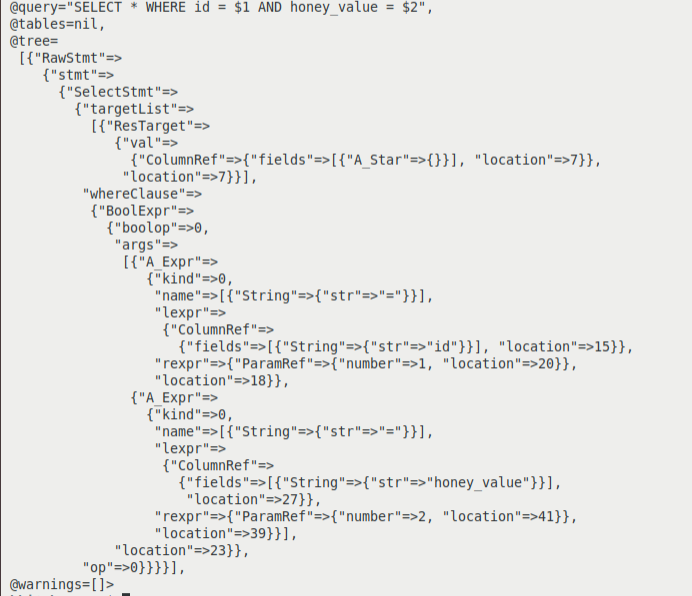 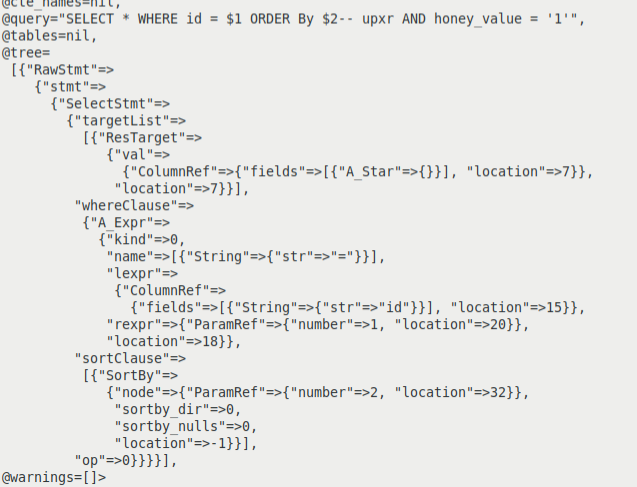 In 2019 the server-side request forgery exploitation technique [3] was used to retrieve AWS (Amazon Web Services) credentials that were subsequently used to steal the personal information of over 100 million Capital One customers.

If a threat actor sends "http://[email protected]" the request will pass the regular expression check in the code shown in Figure 4 and will be sent to the internal IP at the address denoted by "internalip.com". This will prompt a response from the services hosted in the internal network. As per the RFC 3986 [5], the structure of the URI will be as shown in Figure 5.

RFC 3986 also specifies the format of authority, as shown in Figure 6.

This means that any check for IP by a web application must ensure that the legitimate IP addresses are checked in every format.

The loopback IP address for most operating systems is 127.0.0.1 ~ 127.255.255.254. If the URI is a file, then the data flow graph is used to check whether the parameters passed to the APIs which open files are from methods which accept external inputs. If the condition is found to be true then an alert for SSRF is raised.

In the case of a persistent XSS vulnerability, methods that accept user inputs, such as POST, etc., are used by a threat actor to inject an XSS exploit. These exploits then get stored in the backend database or in a secure store. This stored data is then sent to the victim without HTML escaping, where the XSS exploit gets executed.

Figure 9 shows exploitable code [6] for persistent XSS in a WordPress plug-in and the changes made to the code to remove the vulnerability. As shown in the code, there is insufficient sanitization of the plug-in version numbers before they get displayed by invoking the printf API on the corresponding plug-in page in the repository. This version number is retrieved from the database. Threat actors can exploit the vulnerability by inserting an XSS exploit with JavaScript code in the version number. This will lead to the execution of the JavaScript code. As shown in Figure 9, in the patched code the esc_html() function has been added to escape the string to ensure it is not passed as HTML.

The algorithm to detect persistent cross-site scripting makes use of application-level hooks to construct a program dependency graph (PDG). The PDG captures the flow of data and control from methods which accept external or user input, such as GET, POST, Cookies, etc., to the functions which execute the SQL query such as mysql_query(), mysql_db_query(), mysql_unbuffered_query(), pg_execute(), pg_query(), pg_query_params(), pg_prepare(), pg_send_query(), and pg_send_query_params(). Once the PDG is generated, it is used to identify the legitimate SQL queries, which are the sink for the value from the methods which accept user or external input such as GET, POST, etc. For every invocation of the query execution function a data flow graph is used to check if the input to the query execution function is from user input. If the condition is found to be true, the input is parsed against the HTML parser [7] to check if the input is an HTML element. If this condition is found to be true, an alert for persistent XSS is raised.

The algorithm to detect SQL injection in stored procedures, persistent XSS, and SSRF makes use of application-level hooks. Injection-based exploitation leads to additional code, resulting in changes to the legitimate code of the application. The computation of changes in the code is carried out for every access to the database. If there is a deviation from the original code, which is identified by changes in the parse tree of honey queries or by executing the external inputs to the executing query against the HTML parser, an alert for injection exploitation is raised.

The algorithm to detect injection-based exploitation has the following inherent advantages:

The parameter and honey query integrity algorithm follows the principle of detect, respond, and remediate. Not only does the algorithm detect exploitation, but responsive measures can be applied to stop exploitation; it also provides remedial action, which will increase the exploitation complexity for a threat actor. In the case of the parameter and query integrity algorithm, remedial action is patching the vulnerable code path, which is automatically identified with each detected exploitation attempt. If the code is patched, detection alerts will decrease, increasing the exploitation complexity for a threat actor.

[2] Singh, A.; Mani, R. Catch me if you can: detection of injection exploitation by validating query and API integrity. https://www.virusbulletin.com/virusbulletin/2020/01/vb2019-paper-catch-me-if-you-can-detection-injection-exploitation-validating-query-and-api-integrity/.

[3] Krebs, B. What we can learn from the capital one hack. https://krebsonsecurity.com/tag/capital-one-breach/.