Today, we are very excited to announce the programme for VB2018, the 28th Virus Bulletin International Conference, which is to take place in Montreal, 3-5 October 2018.

Putting together a conference programme is not an easy task, particularly when you've received as many excellent submissions as we did, but I believe we have come up with a very interesting and diverse programme, featuring speakers from all around the world representing many different companies and organizations.

The conference will start with an opening keynote from Microsoft's John Lambert who, as General Manager of Microsoft's Threat Intelligence Center, has analysed many advanced threats. Two and a half days later, Duo Security's Wendy Nather will deliver the closing keynote address. A 30-year industry veteran, Wendy barely needs an introduction, but let me say she is known for her strong, well-informed and often radically nuanced opinions.

In between the two keynotes, the main conference programme will consist of 52 talks, 36 of which we reveal today. VB regulars will recognise several faces among the speakers, such as Juan Andrés Guerrero-Saade, now at Recorded Future, who will talk about how to better describe APT groups, and Patrick Wardle, now at Digita Security, who will give another macOS talk - this time focusing on firewalls.

Dhia Mahjoub (Cisco Umbrella) and Jason Passwaters (Intel471) will also be back to discuss their observations of cybercriminals' behaviour, while Cisco Talos researchers Paul Rascagnères and Warren Mercer will speak about the mysterious but high-impact Olympic Destroyer malware they discovered earlier this year. Sophos's Gabor Szappanos, winner of last year's Péter Szőr Award, will return to discuss the timeline of one of the hottest Microsoft Office bugs: CVE-2017-0199. His colleague, Rowland Yu, one of the world's leading Android malware analysts, is also back to discuss Android network analysis, while Malwarebytes' Jérôme Segura will present a paper on the hot topic of 'drive-by mining'. 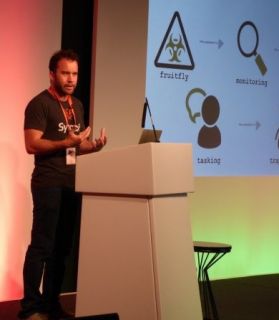 At VB2018 VB regular Patrick Wardle will once again talk on macOS security, this time focusing on firewalls.

We have some very prominent new names on the programme too, including Internet Hall of Fame inductee Paul Vixie (Farsight Security), who will look at why some domain names 'die a premature death'. Cybereason Principal Security Researcher Amit Serper will discuss the OSX/Pirrit adware and his company's legal fight with the people behind it, while Joe Slowik from Dragos Security will discuss the destructive 'CRASHOVERRIDE' malware attack. We are also very honoured to have Masashi Nishihata and John Scott Railton from CitizenLab deliver a talk about their research.

We are just as pleased to have many young talented researchers present their work, including ESET's Filip Kafka, who will speak about Hacking Team; Google's Maddie Stone, who will show how she reverse-engineered an Android anti-analysis library; Maksim Shudrak (Salesforce), who will talk about dynamic binary instrumentation; Saher Naumaan (BAE Systems), who will discuss the rise of malicious wipers; and Thais Moreira Hamasaki (F-Secure), who will present a paper on SMT solvers.

Apart from new speakers, we also have a handful of new subjects that may not belong to the core VB repertoire, but which we believe will be of great interest to many security professionals: Stefan Tanase (Ixia) will discuss the increasing balkanization of the Internet, while Lysa Myers (ESET) will look at the infosec industry's hiring problem and Zoltan Balasz (MRG Effitas) will talk about hacking smart contracts. Two papers (one by Argus Cyber Security's Inbar Raz and the other by Trend Micro researchers Spencer Hsieh and Aaron Luo) will discuss automotive security.

The subject of nation-state attacks linked to the Korean peninsula isn't very new, but based on the submissions we received, it is still a very hot topic. Three talks on this topic made it onto the programme: researchers from South Korea's Financial Security Institute will discuss Dokkaebbi, while ESET researchers Peter Kálnai and Michal Poslušný will discuss the various subgroups of the Lazarus group. AhnLab researcher Minseok (Jacky) Cha will present a paper about previously undiscovered activities by the same group.

At a later stage, we will announce details of presentations by the VB2018 Platinum partners, as well as three more invited talks. In the summer, we will open a call for 'last-minute' papers, to fill the nine remaining slots with papers that cover 'hot' and emerging topics.

Apart from the two main tracks, the 'Small Talks' stream will also return - featuring presentations that are longer than those on the main programme and which are delivered in a more informal setting in a bid to encourage discussion.

One Small Talk, by The Spamhaus Project, has already been announced, and we are also pleased to announce that, for the first time, we will have a number of workshops in this stream, two of which we announce today: Fortinet's Axelle Apvrille, a leading researcher (and regular VB speaker), will teach the brave audience how to reverse engineer Android malware, while Cisco Talos researcher Vanja Svajcer will present a workshop on the important skill of manual kernel mode malware analysis.

You will find details of all these, and many more not mentioned in this blog post, in the VB2018 programme.

Registrations for the conference will open very soon.

We look forward to seeing you in Montreal! 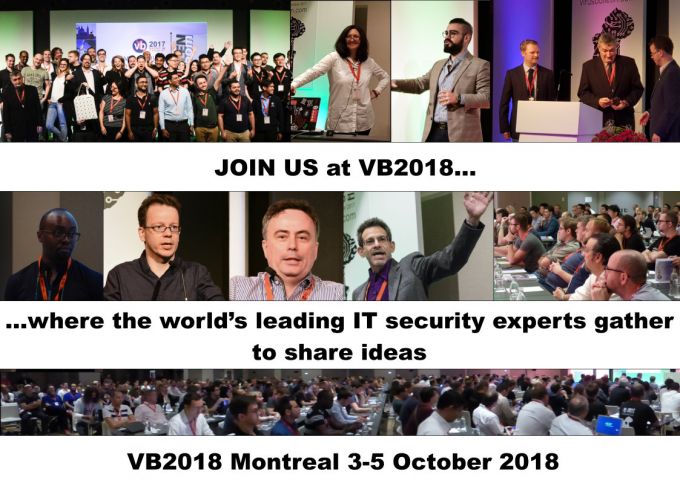